Opioid Antagonist Market Segmentation by Drug Type (Buprenorphine, Naltrexone, Bunavail, and Others); by Route of Administration (Oral, and Parenteral) and by End User (Hospitals, Private Clinics, and Others) - Global Demand Analysis & Opportunity Outlook 2030

The global opioid antagonist market is anticipated to record a significant CAGR throughout the forecast period, i.e., 2022-2030. The market growth can be attributed to the advantages of antagonist in blocking the effects of opioids in the body. It blocks opioid by attaching to the receptors without their activation. These drugs are mainly used as antidotes in order to reverse opioid overdose and in the treatment of opioid dependence as well as alcohol dependence. These factors are predicted to boost the market growth in the upcoming years. Moreover, increasing cases of drug abuse, especially among youth, is expected to boost the market growth. According to the data by the World Health Organization (WHO), in 2019, around 180,000 deaths were directly linked to drug abuse. 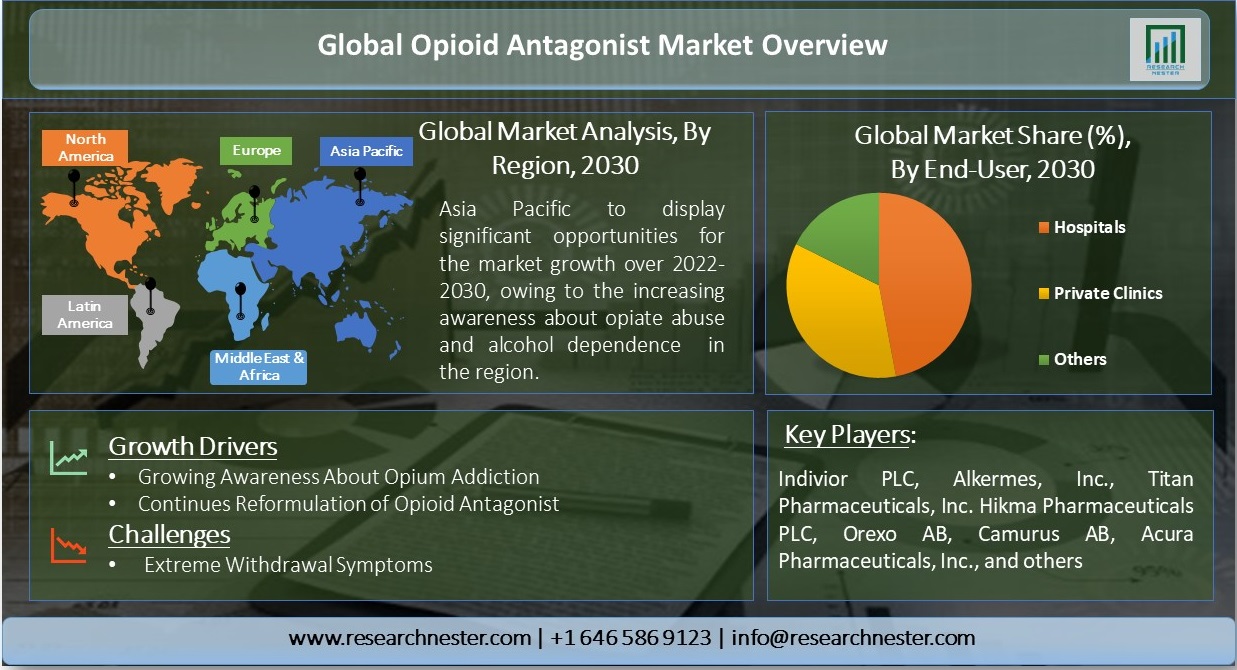 The market is segmented by drug type, into buprenorphine, naltrexone, bunavail, and others, out of which, the buprenorphine segment is anticipated to hold the largest market share over the forecast period, owing to its excellent clinical profile. This drug has a great efficiency in managing addiction, with low potential for abuse as well as relatively mild adverse effects and its favourable formulary coverage are some of the factors that can be attributed to the high adoption of this drug.

On the basis of end-user, the market is segmented into hospitals, private clinics, and others, out of which, the hospitals segment is anticipated to garner the highest revenue during the forecast period, owing to the increasing patient pool for opium and alcohol dependency. Moreover, the critical condition of the individual addicted to drugs, and the need for specific treatment is estimated to boost the segment growth.

On the basis of regional analysis, the global opioid antagonist market is segmented into five major regions including North America, Europe, Asia Pacific, Latin America and Middle East & Africa region. The market in the North America is anticipated to hold the largest market share on the back of presence of nations such as the United States and Canada where there is opioid epidemic to a great extent. Furthermore, governments of the various countries in this region are introducing various policies in order to control the crisis, which is anticipated to promote the growth of the regional market. For instance, in the year 2018, government of the United States launched an awareness advertising campaign in order to combat addiction of opioid.

The market in the Asia Pacific is anticipated to hold the highest CAGR during the forecast period, owing to the rising cases of drug addiction, backed by growing population and poverty, in various developing countries. As per the data by the NIDA, in India, more than 2 million individuals suffered from opiate addiction, out of which, 25% needed immediate medical attention, in 2020. 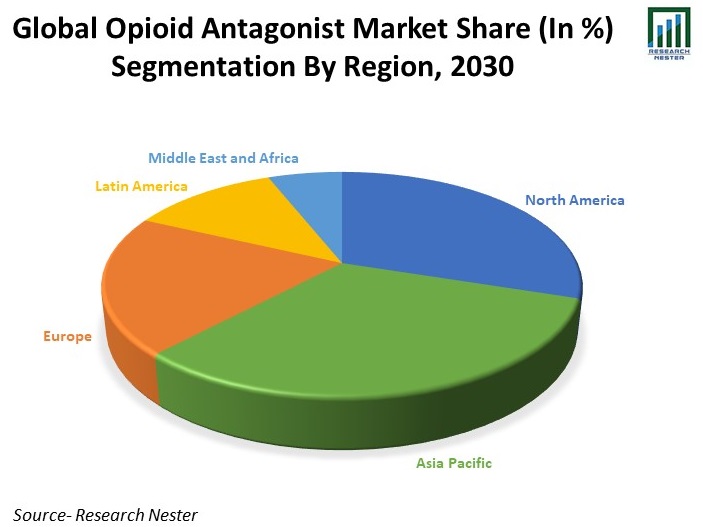 The global opioid antagonist market is further classified on the basis of region as follows:

Our in-depth analysis of the global opioid antagonist market includes the following segments:

What are the major factors driving the growth of the opioid antagonist market?

Increasing cases of drug abuse among youngsters is a major factor driving the market growth.

What would be the CAGR of opioid antagonist market over the forecast period?

The market is anticipated to attain a significant CAGR over the forecast period, i.e., 2022-2030.

What are the challenges affecting the opioid antagonist market growth?

Side effect of withdrawal is one of the factors estimated to hamper the market growth.

Which region will provide more business opportunities for growth of opioid antagonist market in future?

The market in Asia Pacific is estimated to provide most growth opportunities owing to the high population, increasing cases of drug abuse, and growing awareness regarding addiction in the region.

Who are the major players dominating the opioid antagonist market?

What are the segments in the global opioid antagonist market?

The market is segmented by drug type, route of administration, end-user, and by region.

Which sub-segment captures the largest market size in end-user segment in the opioid antagonist market?

The hospital segment is anticipated to hold largest market over the forecast period owing to the growing patient pool of opium addiction.