Snoring is a loud hoarse sound that occurs during sleep. It is a common phenomenon faced by both genders in almost all age groups and occurs in people who are overweight, more frequently in men. It may occur at both night and day time. Aging and obesity are the most important factors behind snoring. Technically, vibration of respiratory structures produces sound due to blocked air movement while sleeping. It can be a symptom of obstructive sleep apnea (OSA). The sound is produced by tissues that are present at the top of the airway that strike with each other and vibrates. Snorers sleep can be disrupted, as well as there may be disturbances in sleep of the bed partner.

Anti-snoring devices that are used to prevent snoring includes Continuous Positive Airway Pressure Devices (CPAP), Tongue Stabilizing Device (TSD), Mandibular Advancement Device (MAD), Nasal Devices and others. The hoarse irritating sound of snoring does not come from the nose, rather it comes from behind the airway.

Surgical treatment of snoring is known as somnoplasty. In this treatment, heat energy is used for the modification of tissues of the soft palate and uvula. It uses low levels of radiofrequency heat energy and local anaesthesia for the procedure. These low levels of radio frequency waves are specifically targeted to burn a specific region of tissue behind soft palate. This small area of tissues is absorbed into the body as they gradually heal which results in the reduction in the amount of tissue.

The global anti-snoring devices and snoring surgery market is observing a vibrant growth as there is an increase in awareness about the negative implications of snoring. Growing technological advancements, rising geriatric population and high rate of alcohol consumption are expected to drive the growth of the market.  Further, the market is expected to show noteworthy development in the upcoming years in developed countries like North America and Europe.

The global anti-snoring devices and snoring surgery market is anticipated to record a CAGR of 9.5% over the forecast period i.e. 2019-2027. With increasing awareness among people regarding these surgeries and devices, the market is observing a vibrant growth. Furthermore, the market is segmented into product type such as nasal devices, position control devices, chin straps, oral mouthpieces/appliances, EPAP therapy devices and CPAP devices out of which the nasal devices are expected to capture the highest market share during the forecast period. Moreover, increment in the demand for anti-snoring treatments and therapeutics in the developed nations is anticipated to boost the market shares in upcoming years. 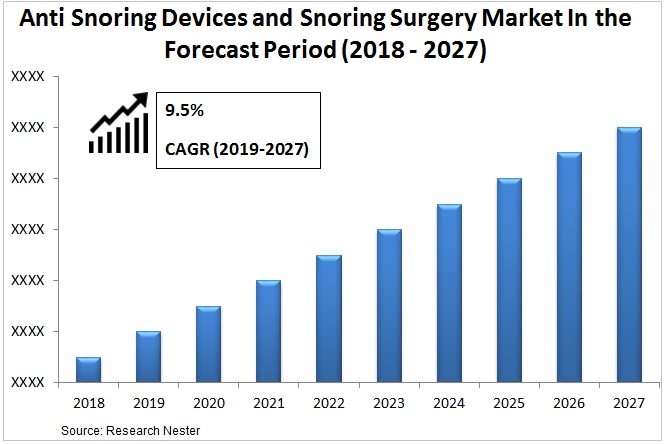 There is an increase in the obese population worldwide due to unhealthy lifestyle which includes lack of physical exercises and unhealthy eating habits. Among them, snoring is one of the major concerns. According to the reports of WHO (World Health Organisation), obesity has tripled since 1975 and in the year 2016, 1.9 billion adults, 18 years and older, were overweight, out of which, over 650 million were obese. This rise in the obese population is estimated to impel the growth of the market around the globe.

The cost restraints regarding the affordability of these devices and surgeries among the people who are not financially strong might dampen the growth of the market over the forecast period.

North America would lead the global market of anti-snoring devices and snoring surgery market as there is an increase in the awareness of the ill-effects of snoring. Further, the Europe region is expected to be the fastest growing market due to huge population of patients and high prevalence of obesity. Asia-Pacific region is also expected to boost the market growth because of the rise in the healthcare sectors and expenditures along with growing healthcare awareness in countries such as India and China.

Global anti-snoring devices and snoring surgery market is further classified on the basis of region as follows: