The global agriculture robotics market is estimated to garner significant revenue by the end of 2031 by growing at a CAGR of ~28% over the forecast period, i.e., 2022 – 2031. Further, the market generated a revenue of USD 5 Billion in the year 2021. The growth of the market can primarily be attributed to the rapidly growing global food demand. According to a report published by the Food and Agricultural Organization of the United Nations, the production of cereals worldwide has been increased by 7 million tons in 2022. 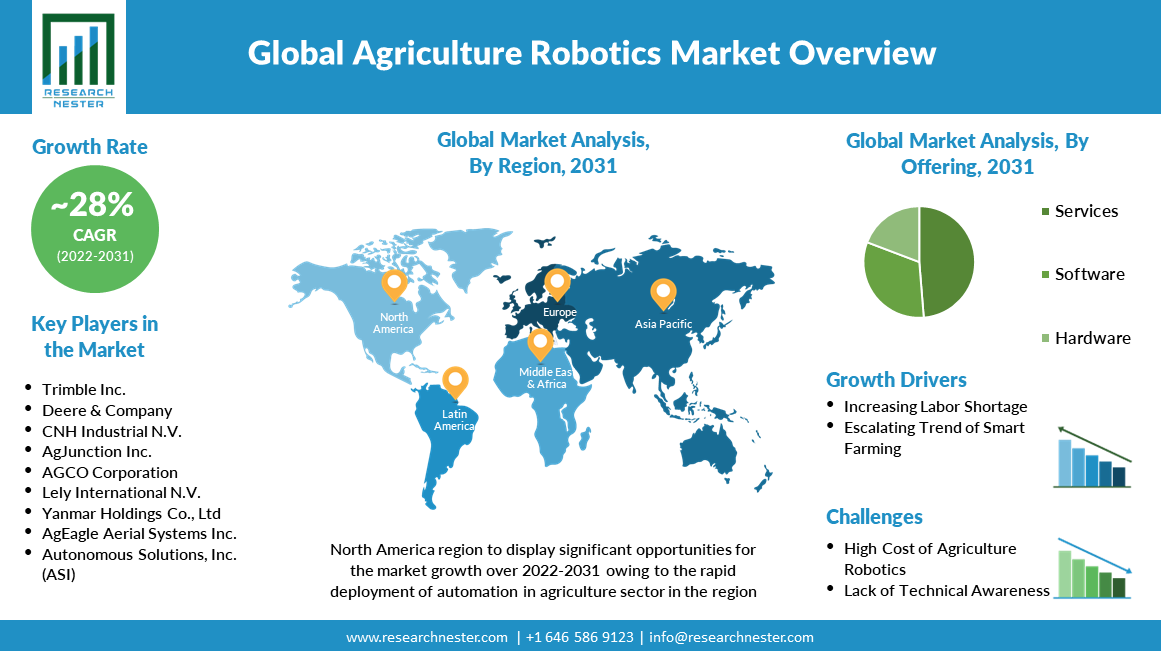 Agriculture robotics are the most technologically advanced machines which are used in agriculture. These robots are fully automated, which reduces the amount of time spent on the job and the amount of manual labor required in the field. In this way, a better crop yield by deploying agriculture robotics. Farmers have been using agriculture robotics in a wide array of farming, i.e., harvesting, weed control, seeding, and soil analysis. By using robotics, more advanced agricultural techniques are enabling increased production of grains, fruits, and numerous other crops and helping out to cater to the rapidly growing food demand. It was observed that the global hunger rate reached between 700 and 800 million people in 2020.

As per a data released by the World Bank, globally, the total ratio of employment in agriculture has dropped to 27% in 2019.

For instance, in 2021, the farming industry fostered approximately USD 1.5 billion.

According to the statistics provided by the Department of Economic and Social Affairs of the United Nations, in 2018, 55% of the total population of the world was living in urban areas and the same is anticipated to grow to 68% by 2050.

For instance, by the end of 2020, the deployment of IoT devices in agricultural production has reached approximately 70 million, raised at a rate of about 20% per year.

The global agriculture robotics market is segmented and analyzed for demand and supply by application management field farming, harvest, dairy & livestock, and soil & irrigation. Out of these sub-segments, dairy & livestock segment is expected to hold the highest growth over the forecast period owing to the growing demand of milk and dairy products. Furthermore, increasing implementation of IoT devices and robotic systems by dairy farmers to enhance the milking systems is further anticipated to boost the growth of the segment over the forecast period. For instance, the deployment of robotic systems in dairy production is growing, and by 2025, sales of robotic systems for dairy farms is projected to exceed approximately 12,000 robots annually.

Regionally, the global agriculture robotics market is studied into five major regions including North America, Europe, Asia Pacific, Latin America and Middle East & Africa region. Amongst these markets, the market in North America is projected to hold the largest market share by the end of 2031 backed by the rapid deployment of automation in agriculture sector, increasing population, and increasing labor costs in the region. As per the data provided by the U.S Department of Agriculture, the agricultural labor wages in 2020 was around USD 14.62, which was 59% of the nonfarm wage. Furthermore, wages for graders, sorters, and equipment operators were ranging from USD 14.09 to USD 15.36 per hour in that year. 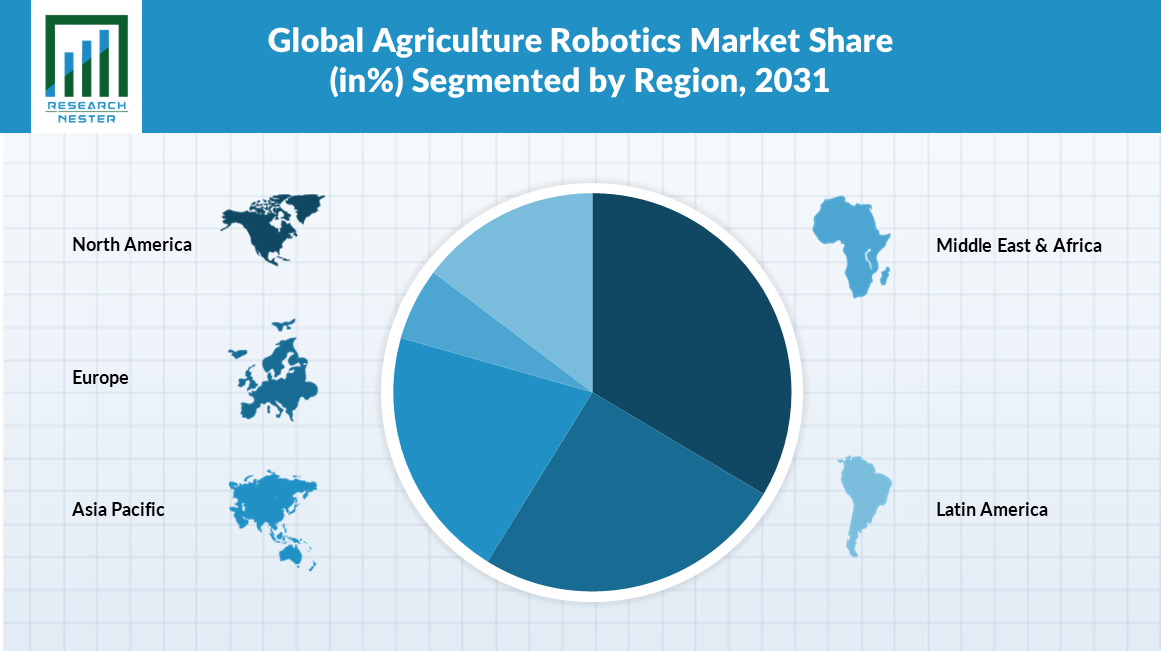 The global agriculture robotics market is further classified on the basis of region as follows:

Our in-depth analysis of the global agriculture robotics market includes the following segments:

What are the major factors driving the growth of the agriculture robots market?

Increasing labor shortage, rising trend of vertical farming, and escalating trend of smart farming are some major factors driving the growth of the market.

What would be the CAGR of agriculture robots market over the forecast period?

What are the challenges affecting the agriculture robots market growth?

Which region will provide more business opportunities for growth of agriculture robots market in future?

Who are the major players dominating the agriculture robots market?

What are the segments in the agriculture robotics market?

The market is segmented by type, offering, application management, farming environment, and by region.

Which segment captures the largest market size in the application management segment in the agriculture robotics market?

The dairy & livestock segment is anticipated to garner the largest market size by the end of 2031 and display significant growth opportunities.