Agricultural drones have helped in redefining agriculture in the recent past. It is estimated that introduction of drones in agriculture processes can help in increasing crop production yield, more cost efficient use of resources as well as higher returns economically. The use of drones in agricultural delivery can also reduce greenhouse effects as the drones require much lesser fuels as compared to the large bulky farm used motorized equipment. Since the introduction of agricultural drones into the market, the industry has been impacted strongly, as these drones make farming less labor driven, more cost efficient and less time consuming. These drones also help in monitoring the agricultural conditions of the farm land as well as keep an observation of the crop productions. There are various advancements to upgrade the components’ life span, monitoring and delivery capacity in the agricultural drones. Autonomous delivery drones can be used for crop protection, organic farming, seeding, data mapping and various other purposes that reduce the overall heavy duty loads from farmers back. There are various projects conducted in association with agricultural autonomous delivery drones across the globe. As an emerging market, the scope of improvement and growth of these robots are very high and is therefore expected to change the face of agriculture over the estimated period.

As redefining equipment to the agricultural industry, North America is panned to observe substantial agricultural autonomous delivery drones market growth on account of the region’s innate nature of adapting to newer technologies at a higher rate and on the back of highest developed countries present in the North-American region. North America is expected to be followed by Europe in terms of consumption due to expanding agricultural autonomous delivery drones requirements for sustainable farming and water consumption. 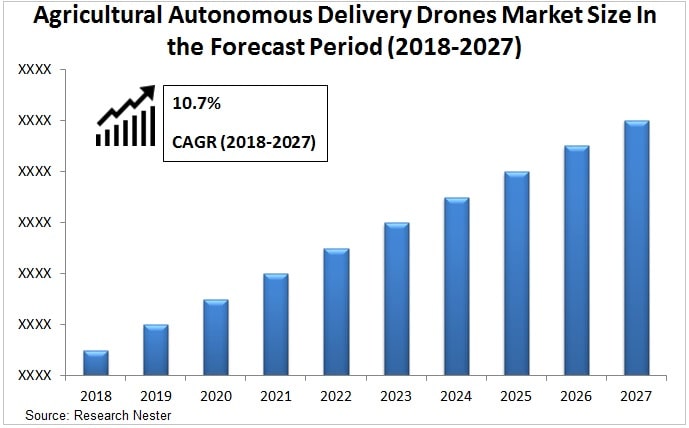 Global Agricultural Autonomous Delivery Drones Market is further classified on the basis of region as follows:

However, the factors such as security constraints and ethical concerns associated with these devices may lead to some countries restraining themselves from the use of this device which is predicted to act as a key factor in the robust growth of the agricultural autonomous delivery drones market.