A landline phone is a type of phone that transmits data using a metal wire or optical fiber telephone line, as opposed to a mobile cellular line, which transmits data using radio waves. Further, landline is divided into two types which includes, corded landline, and cordless landline. A corded landline is one that is wired into the service provider's network via a wall jack. A cord connects the phone base and receiver (also known as the handset). Whereas. in a cordless landline, the phone base plugs into the wiring through a jack, but the handset is connected wirelessly.

However, as technology has advanced, new forms of landline phone services, such as voice over internet protocol (VoIP) that works over an internet connection and wireless landline service that links to cell towers in the local area, have been launched.

The Africa, Middle East and Latin America home landline phones market is estimated to garner a revenue of USD 306.3 Million by the end of 2033 by witnessing a CAGR of -1.8% over the forecast period, i.e., 2023 – 2033. Further, the market generated a revenue of USD 401.8 Million in the year 2019. Despite a decline in revenue during the forecast period, the growth of the market can be attributed to growing demand for communication all across the globe over landline since it offers various benefits to the user. Within Latin America and the Caribbean in 2020, Brazil had the most subscribers for fixed telephone lines. In that year, there were more than 29 million subscribers to landlines in the Portuguese-speaking nation. With approximately 24 million fixed phone lines, Mexico came in second. Also, a landline could be a crucial piece of technology for elders since it is straightforward to use and they are familiar with it. 75% of Americans aged 75 and up have a landline phone in their home. Hence, the demand for the product is estimated to increase within the growing geriatric population. 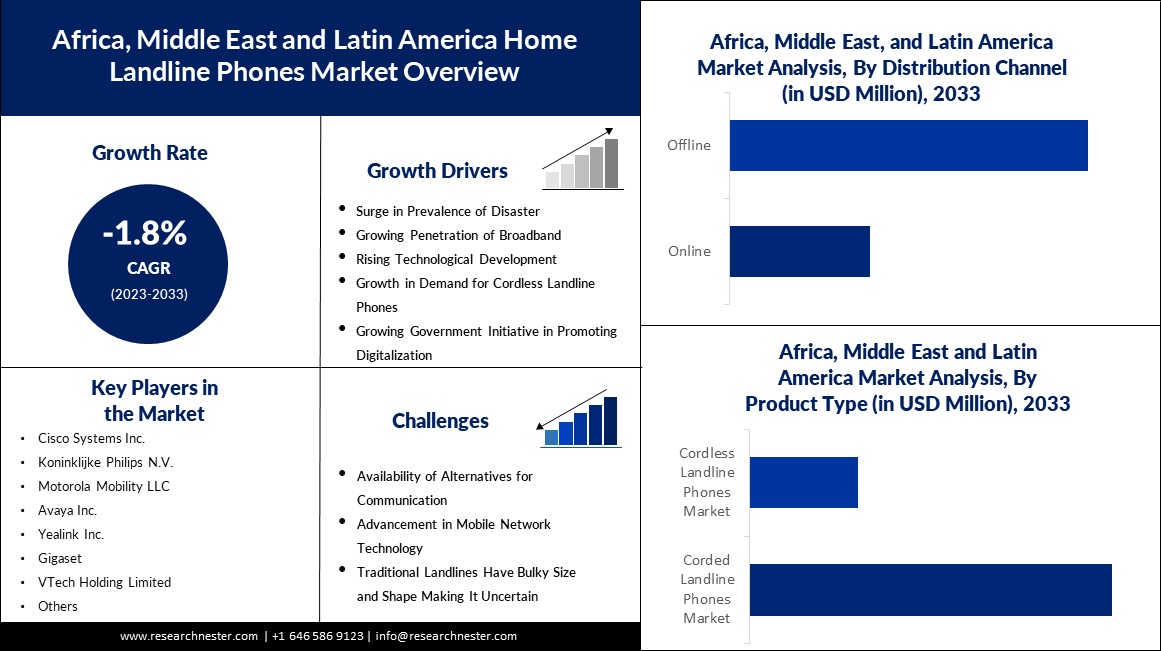 Also, landlines do not have any potentially risk of dangerous mobile infrared radiations. A landline installed in the house may be capable of safeguarding members residing in the house from illnesses that could later emerge when using a cable or smartphone, since landline emits no radiation. According to the National Cancer Institute, cell phones of the second, third, and fourth generations (2G, 3G, and 4G) emit radiofrequency between 0.7 and 2.7 GHz. Cell phones of the fifth generation (5G) are projected to utilize the frequency range up to 80 GHz. Hence, the demand for landline is further estimated to increase. However, in last few years the market for home landline phones in Africa, Middle East and Latin America were estimated to decline. As a result, traditional telephones are replaced with modern smart landline that combines the functions of a smartphone and a telephone, which is expected to again boost the growth of the market.

Africa is responsible for about 14% of weather, climate, and water-related disasters, approximately 34% of linked deaths, and 1% of worldwide economic losses. Hence, the demand for home landlines phones in this region is estimated to boost. Landlines are more secure than cellular or Wi-Fi during natural disasters. The main cause of natural disasters is storms, and the first object to collapse in a hurricane or tornado's strong winds is a cell tower. Therefore, in locations where storms are common, having a functional landline stands to reason.

In Africa, there would then be close to 600 million internet users by 2025. Compared to the global average of 70%, just about 65% of people on the continent have access to the internet. While the remaining 22% have fixed connections, 28% of these are connected via mobile internet.

Panasonic unveiled the KX-TGF892B and the KX-TGD890/892S, two new landline phone models, in September 2022. The KX-TGF892B and KX-built-in TGD890/892S's Bluetooth compatibility enables customers to accept calls and participate in meetings from any location inside their homes via a quick, one-touch pairing process with Bluetooth-enabled devices.

The Digital Economy Initiative for Latin America and the Caribbean (DE4LAC) seeks to assist national authorities in Latin American and Caribbean (LAC) countries in identifying reform and investment possibilities to speed the transition to an inclusive digital economy.

The Africa, Middle East and Latin America home landline phones market is segmented and analyzed for demand and supply by distribution channel into online and offline. Out of which, the online segment is anticipated to grow at the fastest CAGR -1.2% over the forecast period. Despite the negative growth rate and the decline in revenue by 2033, the growth of the segment can be attributed to growing preference of people for online shopping as compared to local stores since it provides customers with ease of convenience and a variety of incentives. In Latin America, there would likely be about 316 million e-commerce consumers by 2022. This number would increase by 22 percent by 2027, reaching approximately 386 million users throughout the region. Besides discount, online stores actually offers product at relatively low price as compared to local stored. Additionally, social media also plays a prominent role in online shopping. It keeps exposing consumers with new products on social media hence further encourage consumer for purchasing the same.

The Africa, Middle East and Latin America home landline phones market is also segmented and analyzed for demand and supply by product type into corded landline phones market, and cordless landline phones market segment, amongst which corded landline segment is anticipated to grow at the fastest CAGR of -1.6% over the forecast period, backed by its growing use by people living in remote area. A classic corded phone does not require electricity and therefore would continue to function even if the power goes off for a lengthy period of time. Hence, people residing in remote region prefer corded landline. Additionally, the market is influenced by a number of factors, including the fact that corded phones virtually eliminate the risk of dropped calls caused by a depleted battery or signal loss. Also, corded landline phones are more affordable and secure, and that they reduce home security costs since it is simpler to connect security systems to landlines than to cellphones.

The Latin America home landline phones market, amongst the market in all the other regions, is projected to hold the market revenue of USD 178.8 Million by the end of 2033, growing at a CAGR of -1.4% over the forecast period. However, the market in this region generated revenue of USD 225.2 Million in the year 2019. The growth of the market in this region is declining from last few years owing to the growing popularity of mobile phones among people. In Latin America, the smartphone penetration rate has remained stable at about 70% since 2019, and is expected to increase to approximately 72% by 2025. Nevertheless, there has been growing technology development which is expected to maintain the demand for landline in this region. These technological advancements in landline phone sets, includes touchscreen options and enhanced antenna/receiver to provide clear conversation.

1) What are the major factors driving the growth of the landline phone market?

Ans: The major factor driving the growth of the market are surge in prevalence of disaster, growing prevalence of broadband, rising technology development, and others.

2) What would be the CAGR of landline phone market over the forecast period?

3) What are the challenges affecting the landline phone market growth?

Ans: Availability of alternatives for communication, advancement in mobile network technology, and traditional landlines have bulky size and shape making it uncertain are estimated to be the growth hindering factors for the market expansion.

4) Which region will provide more business opportunities for growth of landline phone market in future?

Ans: The market in the Latin America region is projected to hold the largest market share by the end of 2033 and provide more business opportunities in the future.

5) Who are the major players dominating the landline phone market?

7) What are the segments in the Africa, Middle East and Latin America home landline phones market?

Ans: The market is segmented by product type, distribution channel, and by region.

Ans: The online segment is anticipated to garner the largest market size by the end of 2033 and display significant growth opportunities.