The global robotic guide dog market is estimated to grow at a significant CAGR over the forecast period, i.e., 2022 – 2030. The growth of the market can be attributed to the increasing adoption of robotics and automation amongst the common public. Generally, guide dogs are used by visually impaired or disabled people, for navigation and other purposes. However, the training of these dogs is time taking and costly. Due to this heavy cost spent on training the guide dogs, scientists have developed a new algorithm that is capable of filling the shoes of a guide dog. This quadrupedal robot or robotic guide dog can be used to assist blind people, at a much lesser cost. This robot is not being produced on a commercial stage yet, however, scientists expect the concept to gain commercial popularity by the end of this decade, i.e., 2030. Mass production of robotic guide dogs is expected to be much less expensive than training equal number of dogs, which is estimated to boost the market growth. Moreover, increasing adoption of robotics, backed by the growing tech-savvy population, is estimated to further encourage the market growth. According to the International Federation of Robotics, the robot density in industrial application is 74 robot units per 10,000 employees. 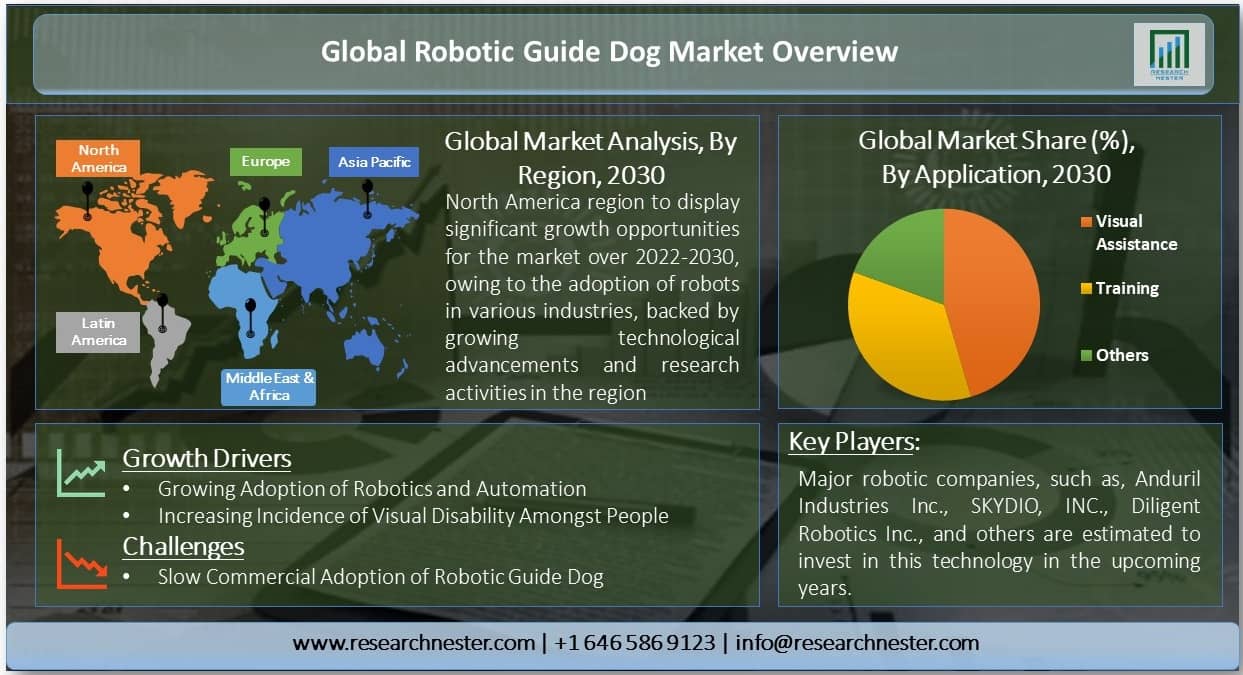 The market is segmented by application into visual assistance, training, and others, out of which, the visual assistance segment is anticipated to hold the notable share in the global robotic guide dog market over the forecast period on account of high expenditure on training dogs for guiding visually impaired people. The cost of robotic guide dog is comparatively lower, increasing the affordability of guide dogs for blind people, which is estimated to boost the market growth. The training segment is estimated to gain significant share by the end of 2030, owing to the ease in training guide dogs using robots.

On the basis of geographical analysis, the global robotic guide dog market is segmented into five major regions including North America, Europe, Asia Pacific, Latin America and Middle East & Africa region. The market in the North America region is anticipated to gain the largest market share throughout the forecast period owing to the growing research activities in the region, backed by technological advancement and high expenditure on technical R&D activities. Moreover, increasing use of robots in various end-user industries, such as, construction Cobots, cooking robots, and robotics assisted medical care, are estimated to boost the market growth. The market in Asia Pacific region witnessed or is estimated to witness noteworthy growth over the forecast period on the back of increasing adoption of robots in countries, such as, South Korea, Singapore, Japan, and others. 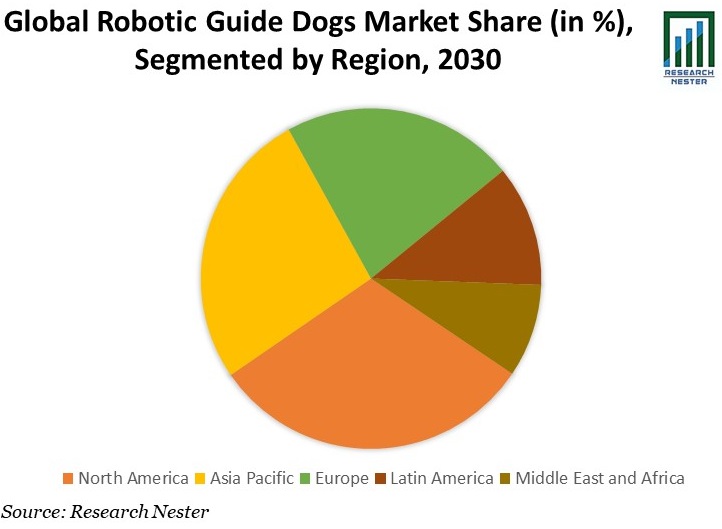 The global robotic guide dog market is further classified on the basis of region as follows:

The robotic guide dog is still in the conceptual stage, with only a few models built by scientists and researchers of the University of California, Berkeley’s Hybrid Robotics Group. However, this concept is estimated to gain significant commercial growth in the upcoming years. Major robotic companies, including, Anduril Industries Inc., SKYDIO, INC., Diligent Robotics Inc, and others, are estimated to invest in this technology in the coming decade.

1) What are the major factors driving the growth of the robotic guide dog market?

Ans: The increasing adoption of robotics and increasing incidence of visual disability amongst people are estimated to boost the market growth.

2) What would be the CAGR of robotic guide dog market over the forecast period?

3) What are the challenges affecting the robotic guide dog market growth?

4) Which region will provide more business opportunities for growth of robotic guide dog market in future?

Ans: The market in the North America is estimated to provide most business opportunities, over the forecast period, owing to the increasing adoption of robotics, and higher technological advancement.

5) Who are the major players dominating the robotic guide dog market?

Ans: The major robotics companies, such as, Anduril Industries Inc., SKYDIO, INC., and Diligent Robotics Inc, are estimated to enter the robotic guide dog market in the near future.

7) What are the segments in the robotic guide dog market?

Ans: The market is segmented by application, distribution channel, and by region.

8) Which sub-segment captures the largest market size in the application segment in the robotic guide dog market?

Ans: The visual assistance segment is anticipated to hold largest market size over the forecast period and display significant growth opportunities, owing to the less expense of robotic guide dog over guide dog.