The global 4K TV’s market is expected to grow at a CAGR of 18.1% over the forecast period i.e. 2017-2024. The market of 4K TV’s is driven by various factors such as rising adoption of innovative technology and swelled disposable income of the population all across the globe.

By geography, with 41% in 2016, Asia-Pacific region accounted for the largest market share followed by North America. Asia-Pacific region is anticipated to continue its dominance over the forecast period. This region is most lucrative market across the globe owing to emerging economies such as India and China. Further, product innovation by manufacturers in China and South Korea are fuelling the growth of 4K TV’s in this region. Besides this, rise in per capita income in this region is also envisioned to flourish the growth of 4K TV’s market. 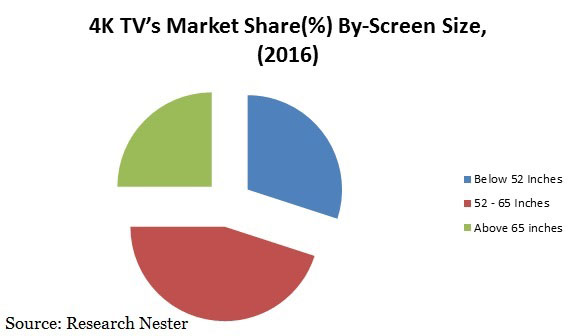 North America stood at second position in revenue terms in 4K TV’s across the globe. Further, North America region is projected to be the fastest growing 4K TV’s market by the end of 2024. Further, evolution of consumer electronic industry and increasing demand for high-end home products are anticipated to foster the demand for 4K TV’s in this region. U.S. is anticipated to capture highest market share in this region over the forecast period. Europe region is the third largest 4K TV’s market owing to growing consumer preference from HD to 4K technology for better imaging. The major countries witnessing the augmented demand for 4K television include Germany, U.K. and France.CLICK TO DOWNLOAD FREE SAMPLE

Furthermore, Middle East and Africa is also expected to witness a tremendous growth over the forecast period owing to rising popularity of ultra-high definition televisions in this region.

Our in-depth analysis segmented the global 4K TV’s market in the following segments:

Global 4K TV’s market is further classified on the basis of region as follows:

Factors such as advancement in graphic technology in television and growing demand for high end electronics are believed to be the dynamic factor behind the rapid growth of 4K TV’s market across the globe. Further, huge investment by industry players in technology advancements is envisioned to bolster the growth of 4K TV’s market by the end of 2024.

Moreover, popularity of the ultra-high definition televisions and increasing purchasing power of the consumers are the major factor propelling the growth of 4K TV’s market. Likely, growing demand for 4K television for better picture quality and increased penetration of UHD set top boxes are projected to boost the demand for 4K TV’s. Swelled disposable income of the population across the globe supported by the positive GDP figures in growing nations is supporting the penetration of consumer electronics.

However, high cost associated with the 4K television is anticipated to hinder the growth of 4K TV’s market over the forecast period.