The cloud TV market is estimated to grow with a moderate CAGR during the forecast period, i.e., 2021-2029. The growth of the market can be attributed to upsurge demand and usage of internet and high adoption rate of 5G technology. Moreover, growing demand for live video streaming and video on demand with user interactive viewing is expected to have a positive impact on the cloud TV market. Cloud TV allow users to choose the programs a user want to watch from an archive of different programs or can opt for a specific live stream. Growing adoption rate of smartphones, tablets and smart televisions are some of the key factors for the growth of the market. According to a recent data published by Global System for Mobile Communications (GSMA), currently there are 5.27 billion people that have a mobile device in the world which means that 67.08% of the world’s population has a mobile device. 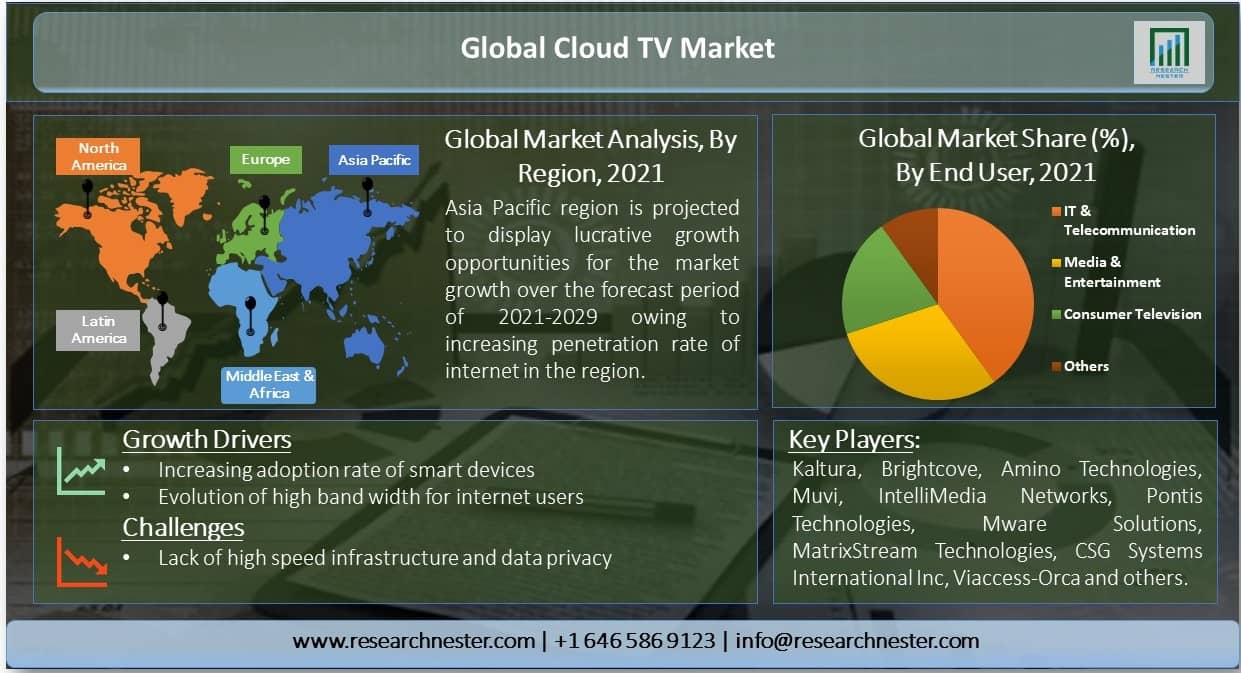 On the basis of deployment, the market is segmented into public cloud, and private cloud. The private cloud segment is expected to have the largest market share owing to secure data usage and privacy. Moreover, the public cloud is also expected to gain high CAGR owing to common sharing option available in the network. On the basis of streaming process, the market is segmented into live streaming and video on demand. The video on demand is expected to have the largest market size in terms of revenue owing to individual preference for video.

Geographically, the Cloud TV market is segmented into North America, Latin America, Europe, Asia Pacific and the Middle East & Africa region. The market in the Asia Pacific is predicted to grow at the highest CAGR over the forecast period owing to rising internet users, along with increased adoption rate of 5G technologies, which are some of the major driving factors for market growth. According to Global System for Mobile Communications (GSMA), 663 million new mobile internet users will be added in Asia Pacific by 2025 and almost a quarter of total mobile connections will be running on 5G networks by 2025. Furthermore, in 2021, the market in Asia Pacific is evaluated to occupy the largest share in terms of revenue since the market is dominated by certain players, with each having the outreach and the potential to cater to millions of users in the region. Along with this, the China is a major contributor to the public cloud, in terms of revenue. Cloud services and IaaS, in particular, are fully embraced by domestic enterprise users. Alternatively, the market in Europe is also anticipated to occupy a significant share in the cloud TV market on account of its large smartphone users and rapid development 5G technology in the region. 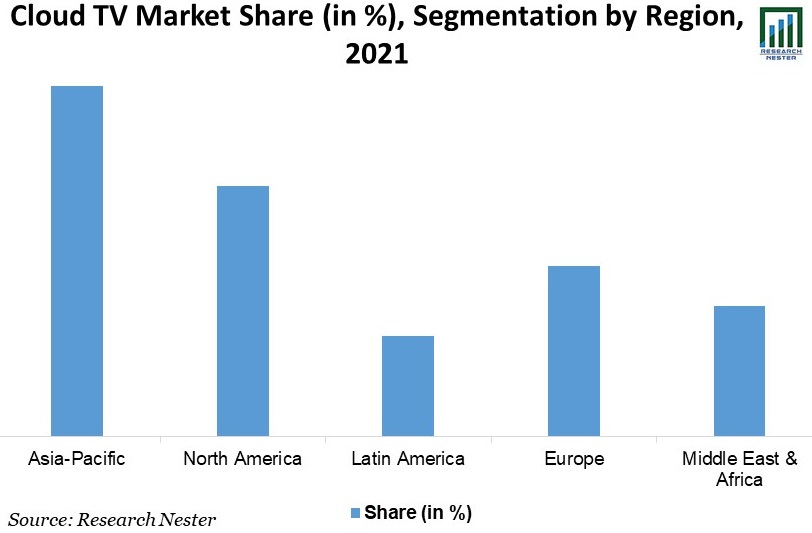 The global cloud TV market is further classified on the basis of region as follows:

Our in-depth analysis of the global cloud TV market includes the following segments:

What are the major factors driving the growth of the cloud TV market?

What would be the CAGR of cloud TV market over the forecast period?

What are the challenges affecting the cloud TV market growth?

Lack of high speed infrastructure and data privacy are some of the factors which is estimated to hamper market growth.

Which region will provide more business opportunities for growth of cloud TV market in future?

Who are the major players dominating the cloud TV market?

The company profiles are selected on the basis of revenues generated from the service segment, geographical presence of the company which determine the revenue generating capacity as well as the new services being launched into the market by the company.

What are the segments in the Cloud TV market?

The market is segmented by deployment, service, streaming process, end user and region.

Which segment under the end user segment captures the largest market size in the Cloud TV market?

With respect to end user, the consumer television is expected to occupy the highest CAGR and market share in cloud TV market owing to large consumer base of internet users across the world.