The global 3D printing plant-based meat market is estimated to garner a hefty amount of revenue and grow at a robust CAGR over the forecast period, i.e., 2022 – 2030. The growth of the market can be attributed primarily to the growing trend of veganism among consumers, especially in developed and developing regions. Along with this, plant-based are less damaging for the environment as it reduces greenhouse emissions by up to 90 percent as compared to conventional meat, and causes much less nutrient and water pollution. This in turn is also expected to augment the market growth significantly in the forthcoming years. 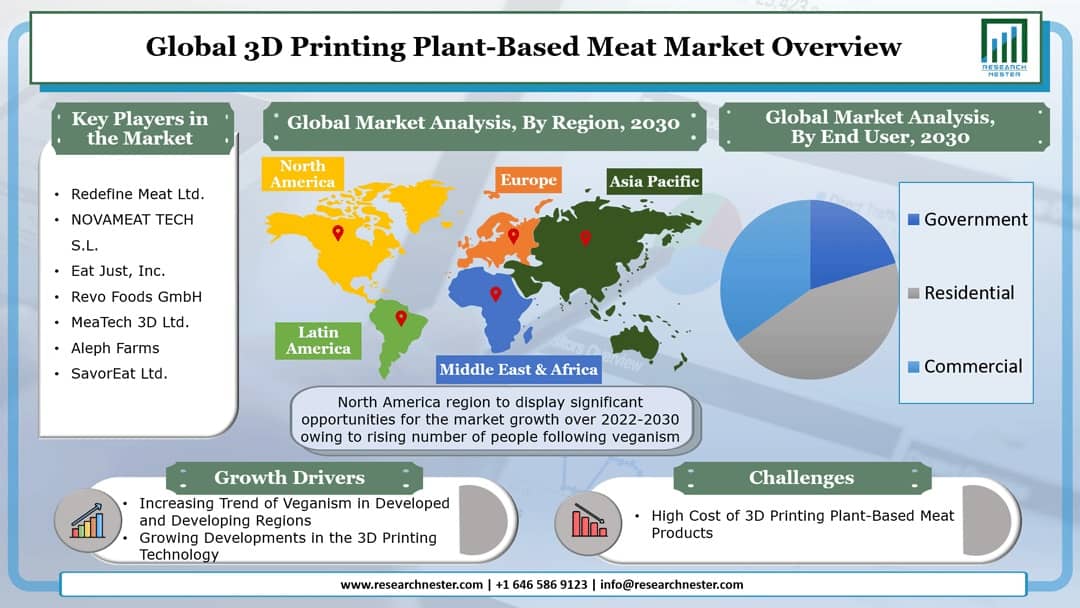 Furthermore, rising developments in the 3D printing technology, increasing demand for customized food, and surge in the disposable income globally are projected to offer lucrative opportunities to the market in the near future. According to the World Bank, the adjusted national per capita of the world was USD 9,446.752 (current USD) in 2019, up from USD 9,340.408 and USD 8,989.491 in 2018 and 2017 respectively. 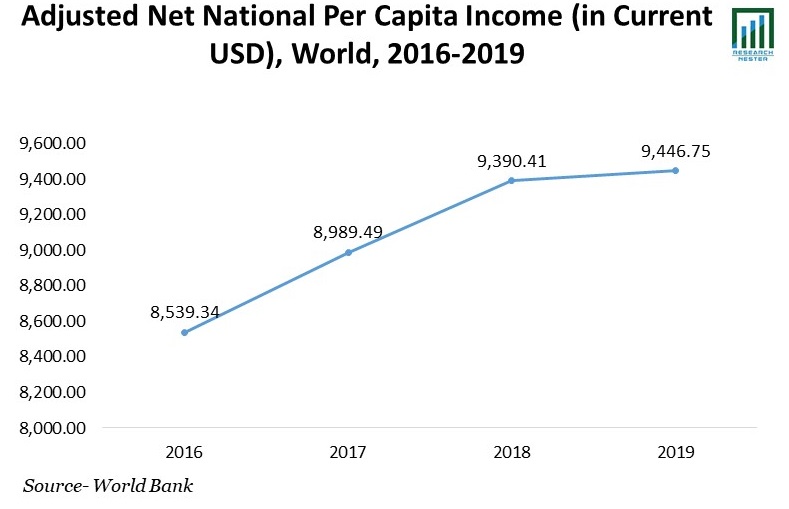 The market is segmented by meat type into red meat, poultry, pork, and seafood, out of which, the red meat segment is anticipated to hold the largest share in the global 3D printing plant-based meat market. This can be accounted to the increasing production of red meat products, mainly steaks, by 3D printing techniques as the texture of these meats is comparatively easier to be produced by printers. Apart from this, red meat is widely consumed in Europe and the Americas, holding the majority of non-vegetarian population around the world, which is also predicted to boost the growth of the market segment in the years to come. Additionally, on the basis of end user, the commercial segment is assessed to acquire the largest share during the forecast period owing to the rising emphasis of restaurants serving vegan products to expand their consumer base to meat eaters as well.

On the basis of geographical analysis, the global 3D printing plant-based meat market is segmented into five major regions including North America, Europe, Asia Pacific, Latin America and the Middle East & Africa region. The market in North America is estimated to grab the largest share and witness noteworthy growth over the forecast period on the back of the growing population of people following veganism, and rise in research and development activities associated with food-based 3D printing techniques in the region. In the United States, about 6 percent of the consumers stated that they are vegan in 2021, up from just 1 percent people in the year 2014. Also, the retail sales of plant-based foods in the country grew by more than 10 percent from 2018 to 2019. In addition, high healthcare expenditure in the United States, coupled with increasing focus to apply 3D printing food technology in the medical sector are expected to offer ample growth opportunities to the market in the future. Moreover, the market in Europe is predicted to acquire a significant share during the forecast period ascribing to the high consumption of plant-based meat, and presence of major market players in the region. 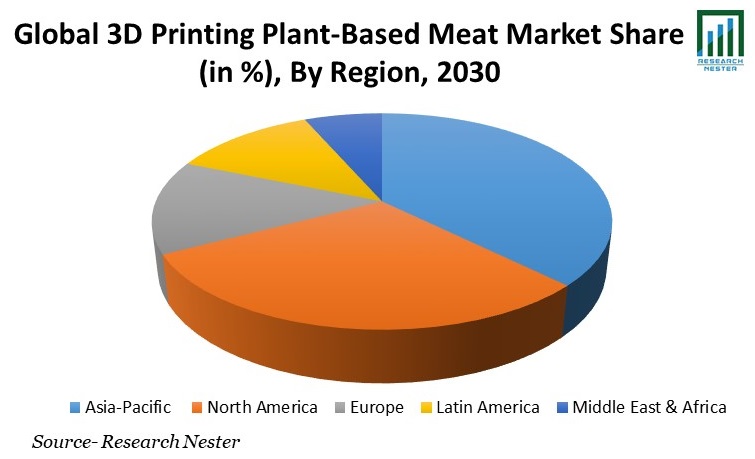 The global 3D printing plant-based meat market is further classified on the basis of region as follows:

What are the major factors driving the growth of the 3D printing plant-based meat market?

The major factors driving market growth are growing trend of veganism in developed and developing regions, and rising developments in the 3d printing technology.

What would be the CAGR of 3D printing plant-based meat market over the forecast period?

Who are the major players dominating the 3D printing plant-based meat market?

What are the segments in the 3D printing plant-based meat market?

The market is segmented by meat type, end user, and by region.

Which segment captures the largest market size in the meat type segment in the 3D printing plant-based meat market?

The red meat segment is anticipated to hold largest market size and is estimated to grow at a notable CAGR over the forecast period and display significant growth opportunities.