Growth Highlights based on Region during 2017-2026

The global 3D printing medical device market is segmented by regions into North America, Latin America, Europe, Asia-Pacific and Middle East and Africa. Among these regions, the market of North America 3D printing medical device is primarily driven by nations such as U.S. and Canada, where U.S. held the dominant market share of around 64% in the year 2017. The growing initiatives observed in the educational institutes along with education grants and R&D funding in leading research institutes in the nation, which are increasingly procuring 3D technology devices along with growing interest of the government of the nation to invest on such devices for advancements and in-depth research and development are driving the growth of the market in the nation. Additionally, the North America 3D printing medical device market, which held a market share of around 35% in the year 2017, is expected to expand by observing the growth rate of around 3.40x over the forecast period, which in turn is estimated to have a positive effect on the demand for 3D printing medical devices in the long run. CLICK TO DOWNLOAD SAMPLE REPORT

Further, Germany, France and UK are the prominent countries that are driving the growth of the Europe 3D printing medical device market, where Germany accounted for the largest market share of around 27% in the year 2017. 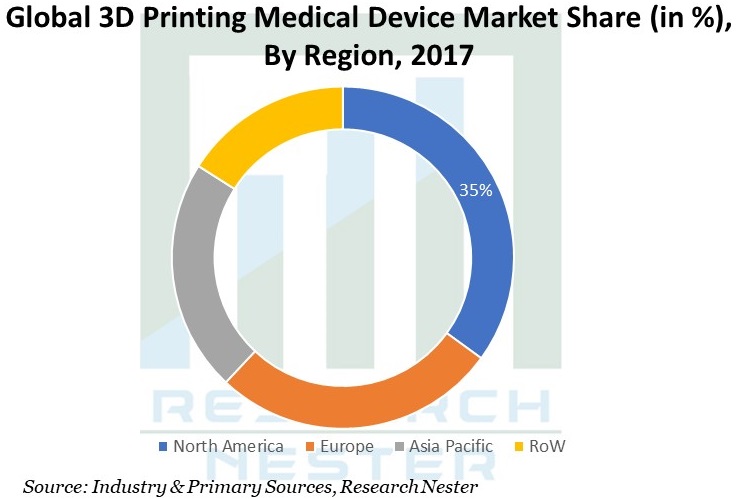 The global 3D printing medical device market has been segmented on the basis of technology into photopolymerization, laser beam melting, droplet deposition and others. Photopolymerization segment with around 35% share in the year 2017, occupies the largest market share of 3D printing medical device across the globe. Additionally, photopolymerization segment is anticipated to cross a value of around USD 1200 million by the end of 2026 by registering a CAGR of around 18% over the forecast period. Further, the droplet deposition segment is anticipated to grow with a CAGR of around 17% over the forecast period. 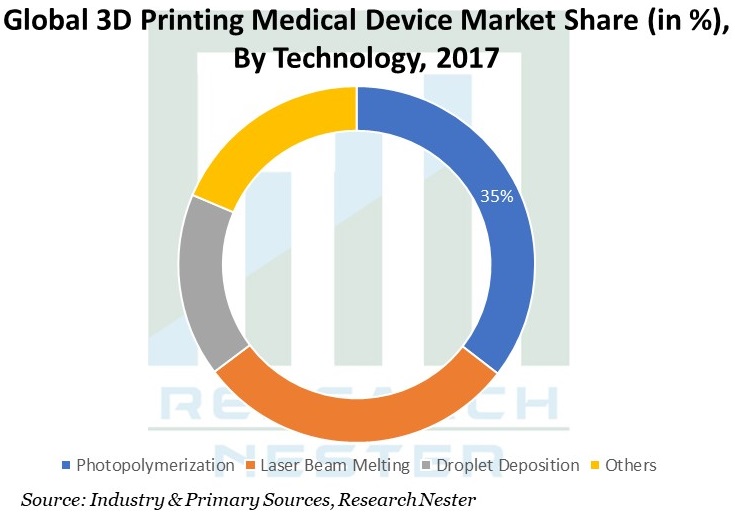 Stringent regulation of the governments of nations around the world for the utilization of 3D printing technology as access to these devices can severely possess a threat to the healthcare industry are some of the factors anticipated to impact negatively towards the growth of the global 3D printing medical device market.

What are the major factors driving the growth of the 3D Printing Medical Device market?

Increasing utilization of 3D printing medical devices in the healthcare industry, coupled with the increasing geriatric population around the world are some of the major factors that are driving the growth of the market.

What would be the CAGR of 3D Printing Medical Device Market over the forecast period?

The market in Europe is anticipated to show significant growth opportunities in the future.

Who are the major players dominating in the 3D Printing Medical Device market?

What can be the significant growth opportunity for the technology segment in the market?

The photopolymerization industry segment, which is a sub-segment of the technology segment, held the largest market share of around 35% in the year 2017 and is anticipated to show significant growth opportunity.

Growing concern for the stringent regulations for the utilization of 3D printing medical device by the governments of nations around the world are some of the factors anticipated to act as a barrier towards the growth of the market.