The growth of the global 3D printing medical implants market is thriving on the back of increasing focus on advancement of medical products backed by the rising investments in R&D by the key players, coupled with the growing importance of 3D printing in the healthcare industry. 3D printing plays an essential role in the healthcare industry as it provides healthcare specialists the power to manufacture several medical devices. 3D printing is a process in which a three-dimensional object is created by building consecutive layers of raw material. Each new layer created is fixed with the previous layer until the object is complete. Such objects are manufactured from a digital 3D file, such as Magnetic Resonance Image (MRI) or a computer-aided design (CAD) drawing. The 3D printing technology has numerous utilities in manufacturing medical devices such as cranial and orthopedic implants, titanium replacements of jaws and hips, surgical apparatus, dental fillings such as crowns, and external prosthetics, and limb prosthetics. Owing to the easy usage and innovative technology, many medical specialists prefer 3D printing devices before initiating any treatment or surgery, which tends to reduce the risk of any error.

The global 3D printing medical implants market is segmented by regions into North America, Latin America, Europe, Asia-Pacific and Middle East and Africa. Among these regions, North America 3D printing medical implants market is driven by U.S. and Canada, where U.S. held the dominating market share of around 70% in the year 2018. Increasing investments for the development of healthcare infrastructure in the nation followed by the support of the government in funding research and developmental activities in the nation are some of the factors anticipated to drive the growth of the market in the U.S. Additionally, North America held the largest market share of around 48% in the year 2018 and is anticipated to cross a value of around USD 2600 million by the end of 2027 by registering a CAGR of around 21% during the forecast period.  CLICK TO DOWNLOAD SAMPLE REPORT

Further, Germany, U.K., France, Russia, and Italy are some of the prominent countries that are driving the growth of the Europe 3D printing medical implants market, where Germany accounted for the largest market share of around 20% in the year 2018. Additionally, the market in the nation is also anticipated to grow with the highest CAGR of around 23% over the forecast period and cross a value of around USD 320 million by the end of 2027. 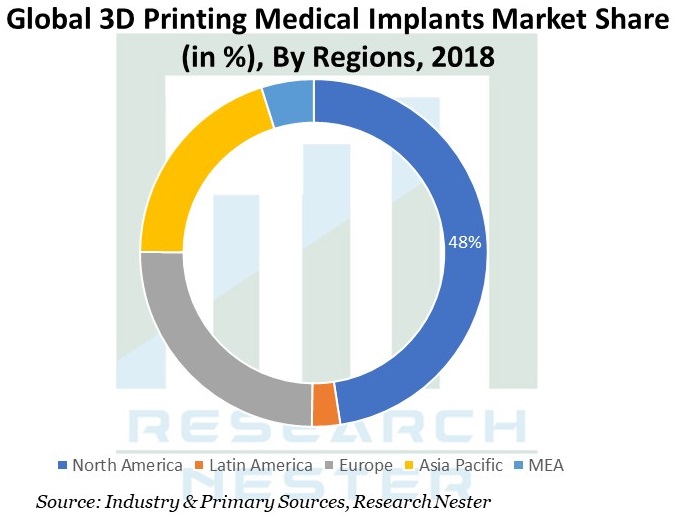 The global 3D printing medical implants market has been segmented on the basis of component into material, services and system. The material segment with around 49% share in the year 2018, occupies the largest market of 3D printing medical implants across the globe. Additionally, the material segment is anticipated to cross a value of around USD 2700 million by the end of 2025 by registering a CAGR of around 21% over the forecast period. On the other hand, the system segment is anticipated to grow with a significant CAGR of around 15% over the forecast period. 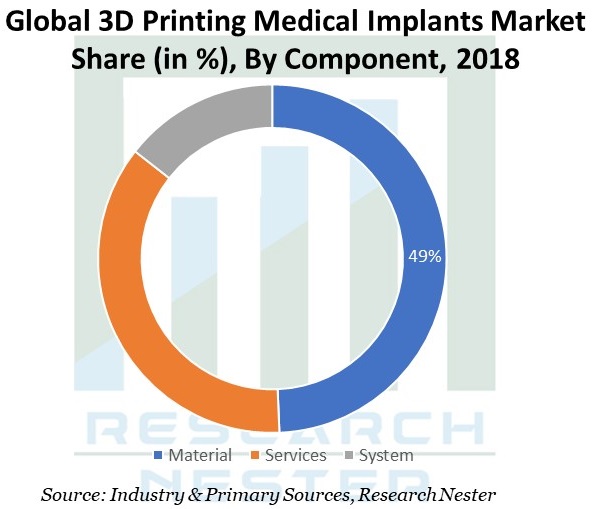 1) What are the major factors driving the growth of the 3D Printing Medical Implants market?

2) What would be the CAGR of 3D Printing Medical Implants market over the forecast period?

5) Who are the major players dominating the 3D Printing Medical Implants market?

7) What can be the significant growth opportunity for the component segment in the global 3D printing medical implants market?

Ans: The material segment, which is a sub-segment of the component segment, held the largest market share of around 49% in the year 2018 is anticipated to show significant growth opportunity.

Ans: Growing concerns for the absence of reimbursement policies, high cost and unavailability of skilled technicians are the factors anticipated to act as a barrier towards the growth of the global 3D printing medical implants market.