The global weather radar market is estimated to grow at a CAGR of ~5% over the forecast period, i.e., 2022 – 2030. The growth of the market can be attributed to the growing government concerns to minimize damage caused by harsh weather conditions, which increases the demand for weather radars in the weather stations. There have been several natural calamities in the recent past which created havoc for the human and other organisms. Incidences, such as, wild forest fires of Australia and Amazon, hurricane Laura in the U.S., Cyclone Amphan in South Asia, and flash floods in regions of India and Indonesia occurred in 2020 alone. Governments of various nations are focusing on efficient prediction of climatic conditions, to reduce the damage caused by such weather conditions, which is estimated to be the primary growth driver for the market. Moreover, increasing air travels and use of aircrafts for transport of goods, has raised the need for weather radars, which, in turn, is projected to boost the market growth. 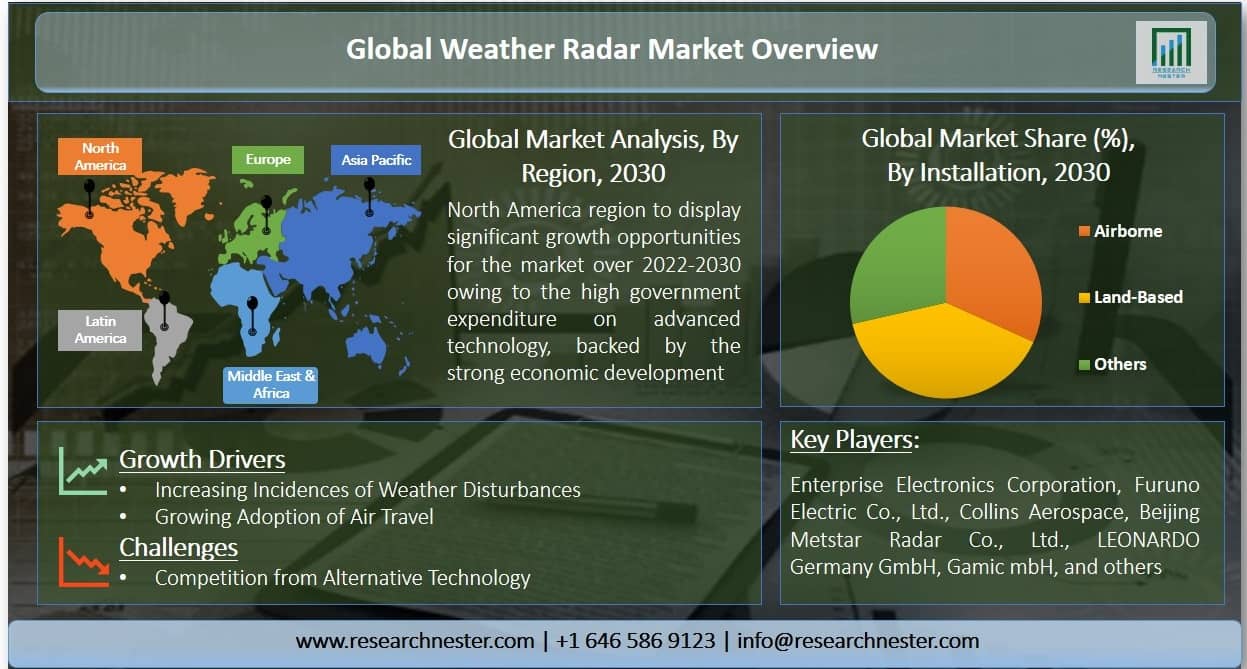 The market is segmented by installation into airborne, land-based, and others out of which, the airborne segment is anticipated to hold the largest share in the global weather radar market over the forecast period on account of higher accuracy of airborne weather radars, backed by rising fluctuations in the climatic conditions. The market is segmented on the basis of end-user into aviation, industrial, weather monitoring, military & defense, and others, out of which, the aviation segment is estimated to gain significant market share over the forecast period, owing to the escalating air travel and delivery through air. According to the data by the International Civil Aviation Organization, 4.397 billion people travelled through airways in 2019. Over 35 million flights were performed by aircrafts in the same year. People are choosing airways over roadways to save time, which is why aviation industry is focusing on weather forecast systems to ensure safe and smooth travel. This is estimated to boost the segment growth. Moreover, the military & defense segment is anticipated to garner notable share by the end of 2030, owing to increasing demand for independent weather radars in the military bases for efficient observation of weather conditions in the area.

On the basis of geographical analysis, the global weather radar market is segmented into five major regions including North America, Europe, Asia Pacific, Latin America and Middle East & Africa region. The market in North America region is estimated to witness noteworthy growth over the forecast period on the back of high government expenditure on advanced technology, backed by the strong economic development in the countries, such as, United States, and Canada. Moreover, higher adoption of technology in the military and defense sector, along with huge budget for security forces in the region, are estimated to boost the market growth.

The market in the Asia Pacific is estimated to witness highest CAGR during the forecast period, as the region is prone to weather disturbances, owing to its geographical position, especially countries, such as, Indonesia, Singapore, Japan, and India. This is expected to raise the demand for weather radar amongst various end-users. The economic and technological development in the region also plays significant role in the market growth. 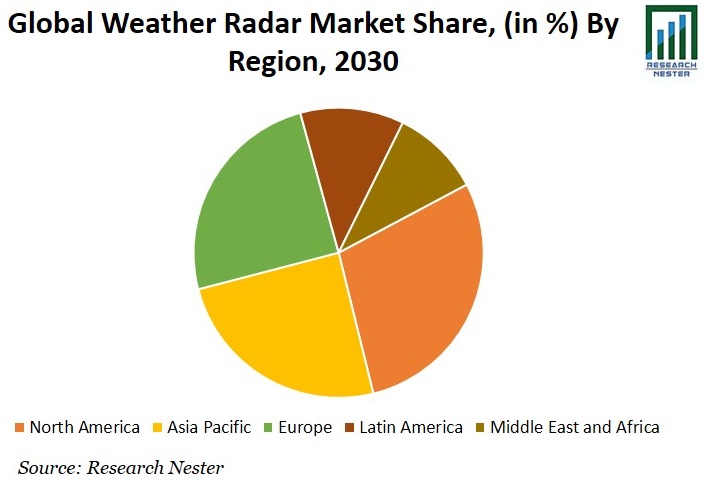 The global weather radar market is further classified on the basis of region as follows:

Our in-depth analysis of the global weather radar market includes the following segments:

1) What are the major factors driving the growth of the weather radar market?

2) What would be the CAGR of weather radar market over the forecast period?

3) What are the challenges affecting the weather radar market growth?

Ans: High competition from other technologies is estimated to hamper the market growth.

4) Which region will provide more business opportunities for growth of weather radar market in future?

Ans: The market in the North America is estimated to provide more growth opportunity over the forecast period on the back of increasing government expenditure on military and defense sector.

5) Who are the major players dominating the weather radar market?

7) What are the segments in the weather radar market?

Ans: The market is segmented by installation, component, end-user, and by region.

8) Which segment captures the largest market size in end-user segment in the weather radar market?

Ans: The aviation segment is anticipated to hold largest market size over the forecast period owing to the increasing number of flights.