The global vulvar and vaginal atrophy (VVA) therapy market size is estimated to garner a moderate revenue by the end of 2031 by growing at a CAGR of ~11% over the forecast period, i.e., 2022 – 2031. Further, the market generated a modest revenue in the year 2021. The growth of the market can primarily be attributed to the rising number of cases related to the hypoestrogenism condition, known as genitourinary syndrome of menopause (also known as vulvovaginal atrophy or urogenital trophy), among women. For instance, menopausal genitourinary syndrome affects approximately 30% to 75% of postmenopausal women and can significantly impair health, sexual function, and quality of life. 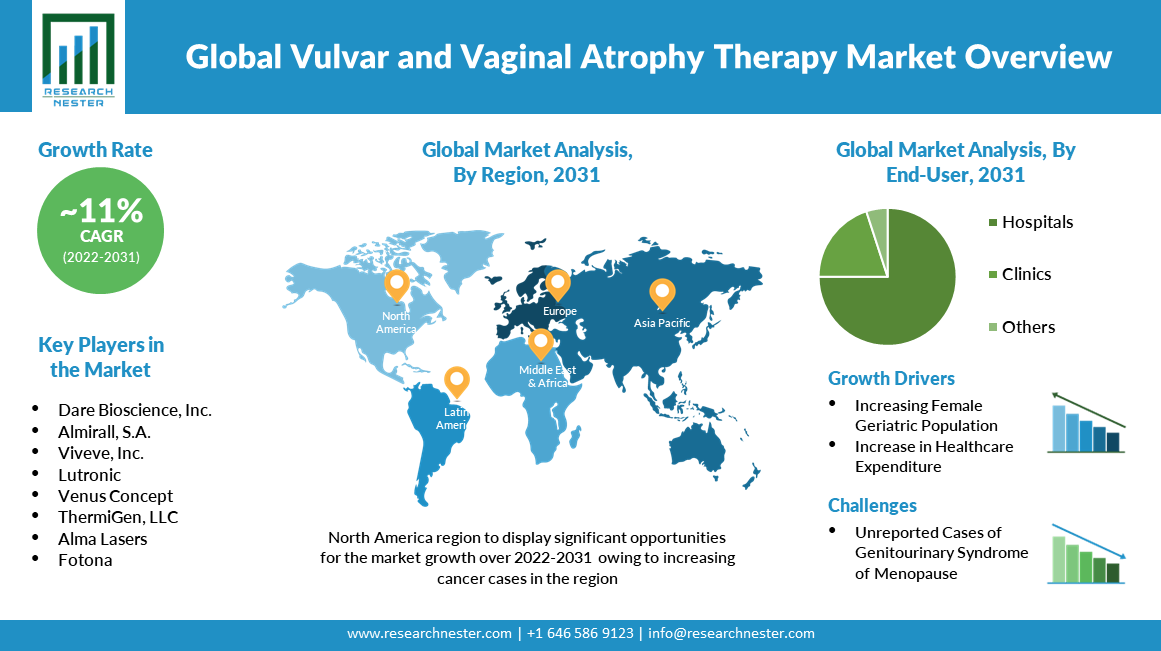 The prevalence of vulvar and vaginal atrophy is commonly reported in postmenopausal women. Decreased estrogen of the vulvovaginal tissue, which results in inflammation of the vagina, is described as vulvar vaginal atrophy or urogenital atrophy. The vaginal inflammation also causes thinning and shrinking of the tissues. Vaginal dryness, irritation, dyspareunia, and urgency in urination are some of the common symptoms of vulvar and vaginal atrophy. It is a chronic condition leading to distressing symptoms and gradually worsens if not treated. Suitable assistance and medical guidance are available for the treatment of VVA. With the rising awareness about VVA therapies among the female population, the vulvar and vaginal atrophy therapy market is expected to expand notably in the coming years.  According to the National Institute of Health, ~1.3 million women in the United States enter menopause each year. The age of menopause begins mostly between 51 and 52 years of age.  However, approximately 5% of women worldwide experience early menopause between the ages of 40 and 45, and 1% experience premature menopause, i.e., before the age of 40, due to sex chromosomal abnormalities, resulting in permanent ovarian failure.

According to the United Nations Department of Economic and Social Affairs, World Population Ageing 2020 Highlights report, there is a rapid growth of the ageing population. An estimated 727 million people are aged 65 or more in 2020. The number is forecasted to reach over 1.5 billion people, almost more than double from 9.3% in 2020 to 16% in 2050. According to the data, on average, women live longer than men. The total ageing population comprises 55% of the female population aged 65 years and above.

Breast cancer has been found to affect the body’s hormones. In women, about 67%-80% of breast cancer cases are estrogen receptor (ER) positive, while in men, around 90% and 80% are estrogen receptor (ER) and progesterone receptor (PR) positive, respectively. According to the World Health Organization (WHO), in 2020, 2.3 million women were diagnosed with breast cancer worldwide. On the other hand, according to the National Cancer Institute, as of 2022, uterine cancer represents 3.4% of all new cancer cases in the United States.

According to the Centers for Medicare & Medicaid Services, national health spending in the United States is expected to grow at a 5.5 percent annual rate, reaching approximately USD 6.0 trillion by the end of 2027.

Lifestyle diseases, associated with physical inactivity and poor diet quality, pose a significant health burden. Gestational diabetes mellitus (GDM), type 2 diabetes (DM2), and polycystic ovary syndrome (PCOS) are a few of the lifestyle-related diseases that affect women. According to the Centers for Disease Control and Prevention, PCOS is one of the most common causes of female infertility, affecting 6% to 12% (up to 5 million) of US women of reproductive age as of 2020. Certain lifestyle disorders, such as depression, insomnia, and weight gain, are also common among women.

The global vulvar and vaginal atrophy therapy market is segmented and analyzed for demand and supply by treatment into non hormonal therapy, hormonal therapy, selective estrogen receptor modulators (SERM), and laser therapy. Amongst these segments, the hormonal therapy segment is anticipated to garner the largest revenue by the end of 2031, backed by the growing number of cancer cases as the therapy lessens the chances of cancer recurrence. For instance, according to the Centers for Disease Control and Prevention, in 2019, around 1,368 women were diagnosed with vaginal cancer in the United States. On the other hand, most women have menopausal hormone therapy (MHT) also known as hormone replacement therapy (HRT) if they experience symptoms associated with menopause.

Regionally, the global vulvar and vaginal atrophy therapy market is studied into five major regions including North America, Europe, Asia Pacific, Latin America and Middle East & Africa region. Amongst these markets, the market in North America is projected to hold the largest market share by the end of 2031, backed by the upsurge in the number of women suffering from pre and postmenopausal hormonal imbalances, as well as the growing number of cancer cases in the region. For instance, according to the Centers for Disease Control and Prevention, in 2019, around 5,579 women (2.6 per 100,000) were diagnosed with vulvar cancer in the United States.

The global vulvar and vaginal atrophy therapy market is further classified on the basis of region as follows: 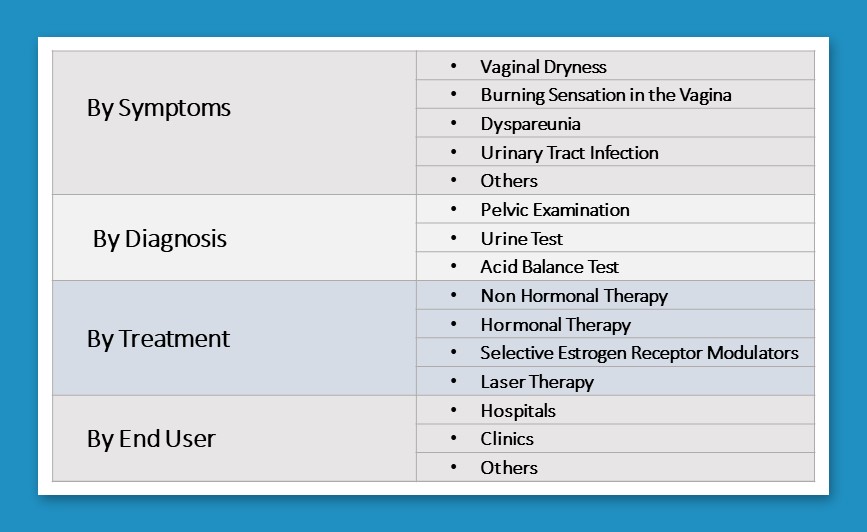 What are the major factors driving the growth of the vulvar and vaginal atrophy therapy market?

Increasing female geriatric population, increase in genitourinary syndrome of menopause, and increasing lifestyle related disorders are some of the major factors anticipated to drive the growth of the market.

What would be the CAGR of vulvar and vaginal atrophy therapy market over the forecast period?

What are the challenges affecting the vulvar and vaginal atrophy therapy market growth?

Unreported cases of genitourinary syndrome of menopause owing to lack of awareness, concerns about vulvar and vaginal atrophy from cancer combination treatments are some of the factors estimated to hamper the market growth.

Which region will provide more business opportunities for growth of vulvar and vaginal atrophy therapy market in future?

Who are the major players dominating the vulvar and vaginal atrophy therapy market?

What are the segments in the vulvar and vaginal atrophy therapy market?

The market is segmented by symptoms, diagnosis, treatment, end user and by region.

Which segment captures the largest market size in application segment in the vulvar and vaginal atrophy therapy market?

The hormonal therapy segment is anticipated to garner the largest market size by the end of 2031 and display significant growth opportunities.