Rising number of crimes, thefts, burglary, concern among population for proper protection and terrorist attacks are asserting to boost the demand for physical security systems market in the United States (US). The propelling rate of cybercrimes over the region have damaged several infrastructure, assets and property over the years. The market for physical security is expecting a significant growth rate on account of increasing crimes, terror attacks and other damages. Increasing crime rate over property and land disputes with physical violence is likely to grow the market for camera witnessing. Significant investment in terms of security factors have been observed during recent years, contributing to the rise of market for physical security devices in United States. US physical security market accounted for a market value of USD 31,989.1 million in 2019 and is anticipated to reach USD 55,157.3 million by 2028, by growing at a CAGR of 7.7% over the forecast period of 2020-2028. Furthermore, upcoming sports events across the country in the near future will also fuel the market growth on account of the need for security.

On the basis of vertical, the US physical security market is segmented into government and defense, BFSI, retail, transportation, industrial and commercial, and others. The government and defense segment accounted for the largest market share of 27.4% in 2019 and is anticipated to grow significantly over the forecast period. There is a growth in the total spending on physical security by government bodies across the nation on the heels of rising security concerns. Moreover, increasing use of security systems such as access control and video surveillance across several areas including airports, railways and public facilities among others, is anticipated to drive the growth of the physical security market in United States. 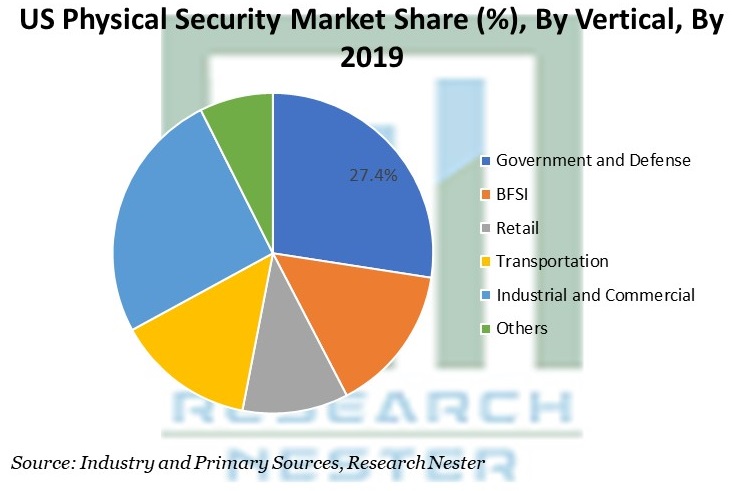 United States physical security market is divided into west US, north-east US, south-east US, south-west US and mid-west US. The west US region accounted for the largest market share in 2019. It includes four significant cities, including California, Alaska, Washington, and Oregon. The western United States physical security market is expected to witness huge growth on the back of rising technological advancements in the wireless technology and the convergence of physical and electronic spaces.

According to the US Department of Justice, in 2018, the rate of crime pertaining to property was assessed at 2,199.5 per 100,000 inhabitants. Larceny accounted for over 72.5%, burglary at 17.1 and motor vehicle at 10.4% of the total property crimes in the United States. 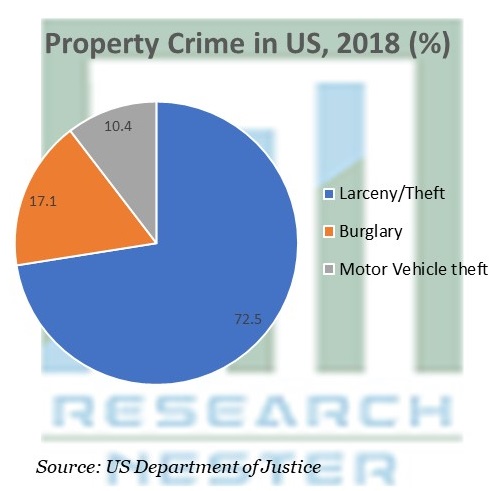 The vast numbers of crimes, along with growing terrorist attacks across the region is anticipated to drive the demand for physical security systems during the forecast period. On the account of growing property crimes, there is a growing demand for door security options such as electronic doors and biometrics authentication in residential premises, driving the physical security market in the United States. Also, significant investment in security is observed in recent years which has positively influenced the adoption rate of the physical security system in recent years.

Growing Focus On Smart Cities To Drive The Market Growth

The country has been significantly focusing on the development of smart cities across the states which is augmenting the overall growth of the market. IoT technology allows for advanced intelligence and mobility that will make cities more effective in using resources to improve everything, including air quality, security and surveillance, water quality, power, transport, and communication system.

The CCTV footage can recognize face and record sound; therefore, sophisticated care and consideration are necessary for CCTV surveillance. Governments are installing CCTV in various public areas for security purpose; however, there is always a possibility that hackers can hack data and can use, store and manipulate the data as per their need. Single point of failure is a part of a networked system that can interrupt the whole operation of the system, if it gets failed. These are often undesirable in the system with a goal of high availability and reliability, be it business practice, software application, or other industrial systems.   These factors are anticipated to hamper the growth of US physical security market over the forecast period.

What are the major factors driving the growth of the US Physical Security market?

Rising demand for physical security devices over increasing crime rate and terrorism and growing focus on smart cities to drive the market growth.

What would be the CAGR of US Physical Security market over the forecast period?

Who are the major players dominating the US Physical Security market?

What are the major segments in the US physical security market?

The US physical security market is majorly segmented by component, organization size, vertical and by region.

What are the restraining factors for the US physical security market growth?

Product exploitation through hacking, data privacy concerns and products prone to single point of failure are the factors that are anticipated to hamper the growth of US physical security market.