Thermoforming is a manufacturing process in which plastic sheet or film is subjected to high temperature to make it pliable, which can then be shaped using a mold, and later trimmed to form a suitable product, such as trays or bottles. In other words, thermoforming is defined as “formed by heating at suitable temperatures”. The trays which are made using such processes are called to be thermoformed trays.

In the recent era, plastic has become the new raw material for any sort of packaging. Besides the question of non-biodegradability, the durability and reusability of plastic is very high. The thermoformed trays are usually made from different grades of plastic, such as, polypropylene (PP), polyethylene terephthalate (PET), polyvinyl chloride (PVC), low density polyethylene (LDPE), high density polyethylene (HDPE), and polystyrene (PS) among others. These thermoformed trays find themselves in packaging items such as processed foods, beverages, consumer electronics, pharmaceutical and medical equipment, among others.

The increasing demand for different end use products across the end user industries, such as FMCG, healthcare, consumer electronics and others, which require flexible packaging for enhanced product shelf life, is anticipated to promote the growth of the global thermoformed trays market. The market is projected to gain a significant CAGR throughout the forecast period of 2021-2029. The global thermoformed trays market is segmented by packaging type into blister pack, clamshell and others. Among these segments, the blister pack segment is anticipated to gain a remarkable market share during the forecast period. Blister packaging is used widely in the pharmaceutical industry. It possesses numerous benefits, such as, it is easy to use, avoids double-dosing, are advantageous for people who are vision-impaired, keeps the product fresh, and others. Moreover, blister packaging offers the manufacturer numerous options for branding and for creating visually appealing and texturally pleasing experience. 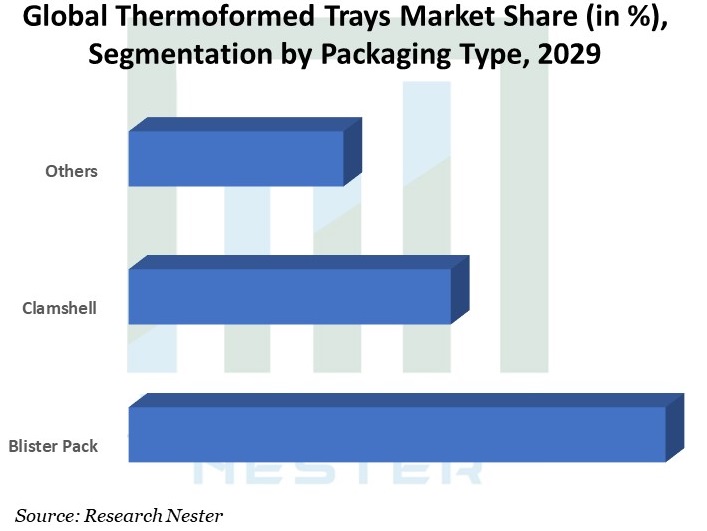 The changing lifestyles of the consumers is one of the primary factors that can be attributed to the growing demand for packaged foods. Packaged foods are available in a variety of shapes and sizes. The manufacturers of packaged foods try to create lucrative packaging for greater consumer visibility and to increase their sales volume. As a result, these packaged foods require different forms of thermoformed trays, which is anticipated to drive the market growth.

Thermoformed trays possess several added advantages over other packaging methods. These trays are rigid and are resilient to damage, which is why they are found to be used widely to pack electronics and medical equipment. On the other hand, the cost of thermoforming process is lower by around 15% as compared to the packaging made through injection molding process. Manufacturers which manufacture packaging goods via thermoforming process, also has a quick turnaround time, which helps them to produce large quantities at a minimal time, and also save on the labor costs. Thermoform packaging also provides the manufacturer numerous design options, allowing them to incorporate different branding types into the packaging. Such factors are therefore anticipated to drive the market of thermoformed trays during the forecast period.

New and improved alternative packaging materials, such as poly(methyl methacrylate) (PMMA), which are known to be dimensionally stable and have high gloss and hardness when modified, possess numerous benefits over thermoformed plastic. Moreover, with the increasing research and developments, several new alternative packaging materials are being developed which costs low to the manufacturers. Such a factor is anticipated to hamper the market growth during the forecast period.

Our in-depth analysis of the global thermoformed trays market includes the following segments:

On the basis of regional analysis, the global thermoformed trays market is segmented into five major regions including North America, Europe, Asia Pacific, Latin America and Middle East & Africa region. The market for thermoformed trays in North America is anticipated to hold the largest share in the market on account of the availability of well-established pharmaceutical and food & beverage sectors, followed by the increasing adoption of the manufacturers towards advanced technologies. Additionally, the market in Europe is anticipated to gain a significant market share on account of the growing demand for thermoformed trays from the pharmaceutical industry, backed by the growing geriatric population, who needs intensive medical care.

The global thermoformed trays market is further classified on the basis of region as follows: