· September 9, 2020: Bayer AG to collaborate with Recursion Pharmaceuticals, Inc., to step into research and drug discovery.

The global Tay-Sachs disease drugs market is estimated to grow at a notable CAGR over the forecast period, i.e., 2021–2030. The growth of the market can be attributed to the growing prevalence of the genetic disease, especially among infants. Tay-Sachs disease is caused by the mutation in HEXA genes, which results into loss of control over muscles. There is no known cure for this disease, therefore, the treatment is generally symptom-specific. Symptoms include exaggerated reactions to loud noises, seizures, loss of movement, vision, and hearing, accumulation of mucus in lungs, and others. The genetic mutation is witnessed specifically in a few communities, such as, eastern and central European Jewish communities, Ashkenazi Jews, certain French-Canadian communities, old order Amish community, and Cajun community, among others. According to the data by the U.S. National Library of Medicine, in this specific Jewish population, one out of every 27 members carry this gene, and one out of every 250-300 live births is affected by Tay- Sachs disease. Rising population of these high-risk communities, is anticipated to boost the market growth. Moreover, increasing investment in R&D activities, to develop new treatment methods to cure the genetic disorder, along with the emergence of new and better drugs used to treat symptoms and complications associated with the disease, are estimated to boost he market growth. 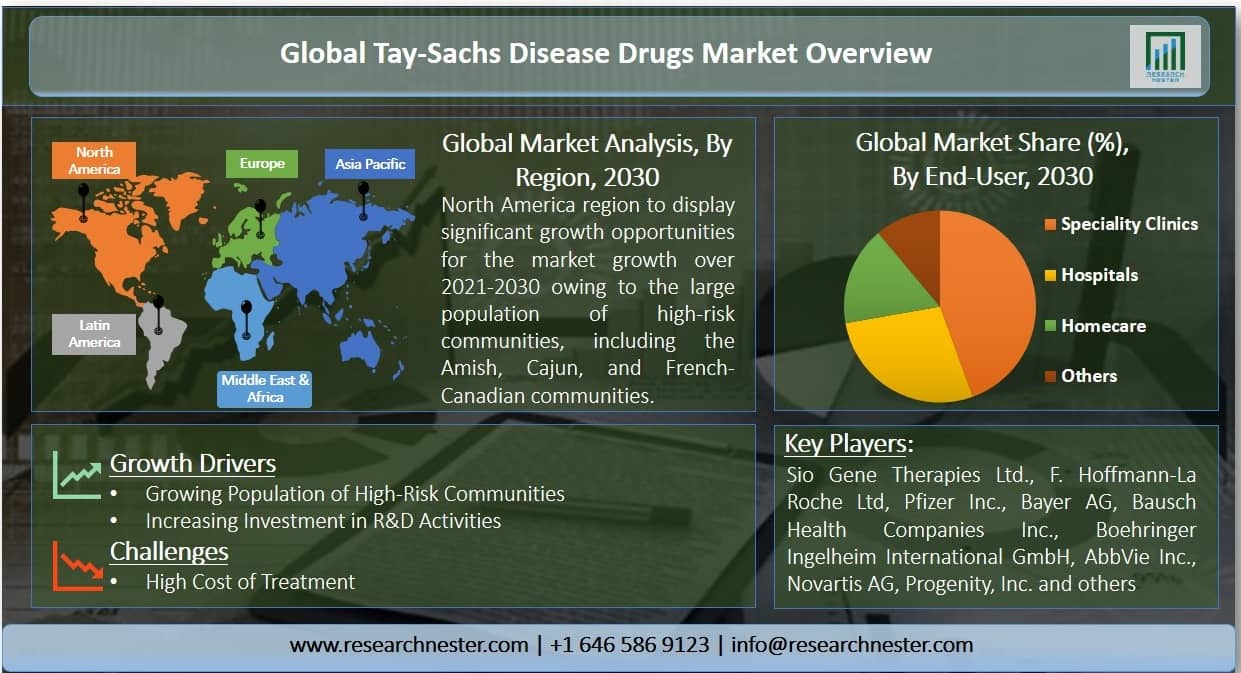 The global Tay-Sachs disease drugs market is segmented by stage into infantile, juvenile, and late-onset, out of which, the infantile segment is anticipated to gain the largest revenue in the market during the forecast period, as the symptoms are very severe in infantile Tay-Sachs disease, and require immediate and constant treatment. The symptoms appear at 6-months of age, and include vision loss, movement loss, patches inside eyes, and respiratory issues. On the basis of end-user, the market is segmented into hospitals, homecare, specialty clinics, and others, out of which, the specialty clinics segment is projected to witness major growth during the forecast period, owing to the symptom specific, and targeted treatment provided in such clinics. CLICK TO DOWNLOAD SAMPLE REPORT

Regionally, the global Tay-Sachs disease drugs market is segmented into five major regions including North America, Europe, Asia Pacific, Latin America and Middle East & Africa region. The market in North America region is estimated to witness noteworthy growth over the forecast period on the back of growing cases of Tay-Sachs disease in the region, backed by the high population of Amish, Cajun, and French-Canadian communities, in Pennsylvania, Louisiana, and Quebec, respectively.  Moreover, the advanced healthcare system, along with growing R&D activities in the region, is estimated to boost the market growth. According to the data by the World Health Organization (WHO), as of 2018, 16.416 % of the GDP was spent on the healthcare sector in North America. The market in the Middle East and Africa region is also estimated to witness moderate growth over the forecast period, owing to the high Jewish population in Israel, other neighboring countries. 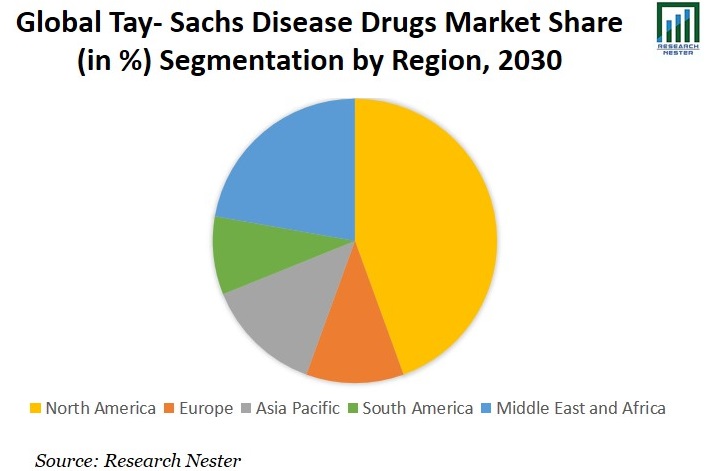 The global Tay-Sachs disease drugs market is further classified on the basis of region as follows:

There is no known cure for Tay-Sachs disease, but treatment is given for the symptoms, which can be different for different patients, and stages. The treatment approach can range from physical therapy, chest physiotherapy, and respiratory care, to antipsychotic medications, and other treatment methods. The major market players manufacturing the various kind of drugs needed to treat the symptoms include Sio Gene Therapies Ltd., F. Hoffmann-La Roche Ltd, Pfizer Inc., Bayer AG, Bausch Health Companies Inc., Boehringer Ingelheim International GmbH, AbbVie Inc., Amgen Inc., Novartis AG and Progenity, Inc.

What are the major factors driving the growth of the tay-sachs disease drugs market?

Rising prevalence of the genetic disease in specific communities, and growing R&D investment for medical research are the major factors driving the market growth.

What would be the CAGR of tay-sachs disease drugs market over the forecast period?

What are the challenges affecting the tay-sachs disease drugs market growth?

High cost of treatment and circulation of generic drugs in the market are the major factors estimated to hamper the market growth.

Which region will provide more business opportunities for growth of tay-sachs disease drugs market in future?

The market in the North America is estimated to provide most growth opportunities owing to the high population of high-risk communities, in various states, including Pennsylvania, Ohio, and Louisiana of the U.S., and Quebec in Canada.

Who are the major players dominating the tay-sachs disease drugs market?

What are the segments in the Tay-Sachs disease drugs market?

The market is segmented by stage, treatment type, end-user, and by region.

Which segment captures the largest market size in the end-user segment in the market?

The specialty clinics segment is anticipated to hold largest market size over the forecast period on the back of focused and more effective treatment facilities provided in specialty clinics.