The swarm robotics market is estimated to grow at a robust CAGR over the forecast period, i.e., 2021 – 2030. The growth of the market can be attributed to the growing adoption of swarm based drones in the military, rising use of swarm intelligence to solve big data problems and increasing applications of this technology in transportation business. It is calculated that the United States will dominate the weaponized military drones market till 2029. U.S.A is predicted to purchase more than 900 drones by the end of 2029. part from these, high demand for swarm robotics in warehouses and increase in use of robotics in airlines are also expected to drive growth to the market in the coming years. Furthermore, wide adoption of embedded processes of swarm intelligence in retail logistics operations offer ample growth opportunities to the market in the near future. 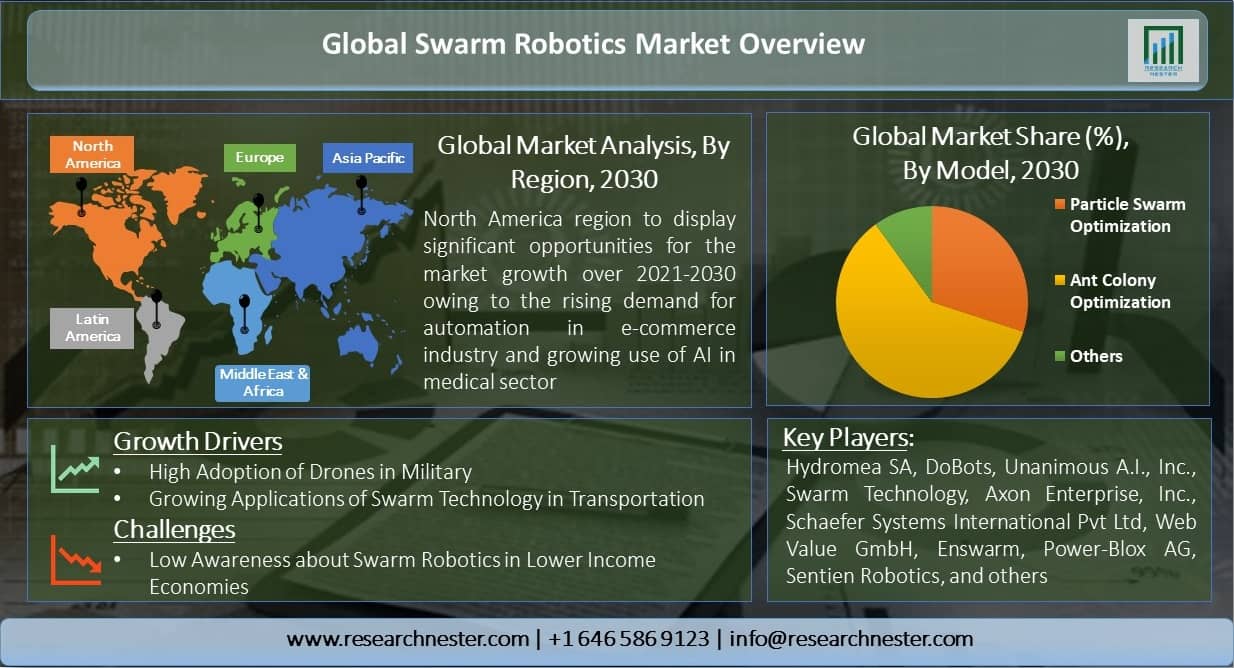 The market is segmented by model into particle swarm optimization, ant colony optimization, and others, out of which, the segment for ant colony optimization is anticipated to hold the largest share in the swarm robotics market on account of the rising acceptance of this algorithm in real time applications for providing optimal solutions and its ability to search among a population in parallel. Additionally, on the basis of capability, the optimization segment is assessed to occupy the largest market share, which can be credited to the efficiency of optimization algorithms to solve difficult problems. Along with this, optimizing process improves the effectiveness of an organization by making them more flexible about customer requirements.

On the basis of geographical analysis, the swarm robotics market is segmented into five major regions including North America, Europe, Asia Pacific, Latin America and the Middle East & Africa. The market in the North America region is estimated to grab the largest market share and witness the highest CAGR over the forecast period on the back of increasing demand for route analytics and automation in retail e-commerce industry, and the increasing scope of artificial intelligence for diagnosis and treatment of diseases. Furthermore, the United States is projected to be a major contributor to the market growth in the region owing to the high military expenditure. The United States has spent the largest amount on military in the last five years. The amount totaled to more than USD 775 billion in the year 2020. Moreover, Asia Pacific is also evaluated to witness significant market growth during the forecast period, which can be ascribed to intensifying technological developments in the robotics sector in the region, especially in countries such as China, Japan, Korea and India. 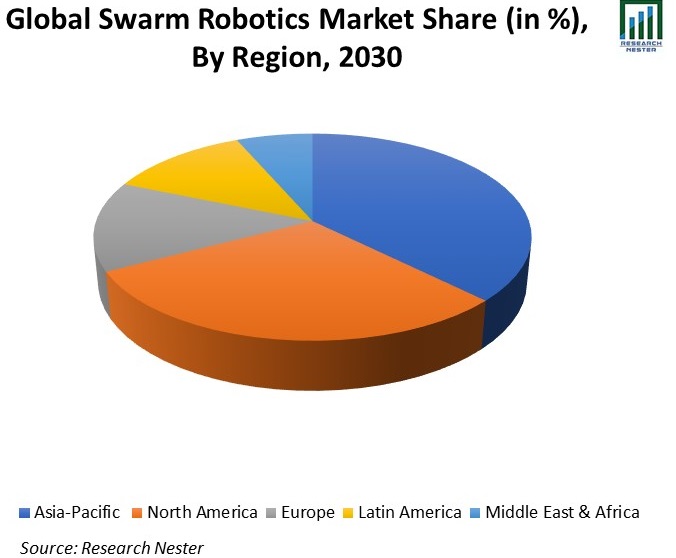 The swarm robotics market is further classified on the basis of region as follows:

Our in-depth analysis of the swarm robotics market includes the following segments:

What are the major factors driving the growth of the swarm robotics market?

The major market growth drivers are rising adoption of swarm based drones in the military and increasing applications of swarm technology in transportation business.

What would be the CAGR of swarm robotics market over the forecast period?

What are the challenges affecting the swarm robotics market growth?

Lack of awareness about this technology in developing nations is estimated to hamper the market growth.

Which region will provide more business opportunities for growth of swarm robotics market in future?

North America will provide more business opportunities to the market on the back of increasing demand for route analytics and automation in retail e-commerce sector.

Who are the major players dominating the swarm robotics market?

The major players in the market are DoBots, Unanimous A.I., Inc., Swarm Technology, Axon Enterprise, Inc., and others.

What are the segments in the swarm robotics market?

The market is segmented by model, capability, and by region.

Which segment captures the largest market size in the model segment in the swarm robotics market?

The ant colony optimization segment is anticipated to hold largest market size and is estimated to grow at a notable CAGR over the forecast period and display significant growth opportunities.