The global surgical boom market is estimated to grow with a moderate CAGR during the forecast period, i.e., 2022-2030. The growing need for integration of surgical boom in operating rooms, along with the rapid rise in the number of surgeries being performed globally, are expected to fuel the progress of this market. Moreover, the increase in the prevalence of diseases such as obesity, diabetes, and hypertension on a global scale has elevated the requirement of various kinds of surgeries, especially from the vulnerable group of individuals such as the elderly population, which in turn is projected to provide lucrative opportunities to the market growth in the near future. The growth of the market can also be attributed to factors such as the growing establishment of ambulatory surgical centers and the rising adoption of minimally invasive surgeries by these centers. According to the data collected from the Center for Disease Control & Prevention of the U.S., chronic diseases are the leading cause of deaths and disability in the United States resulting in high annual healthcare costs. 6 out of 10 adult individuals in the country have a chronic disease. 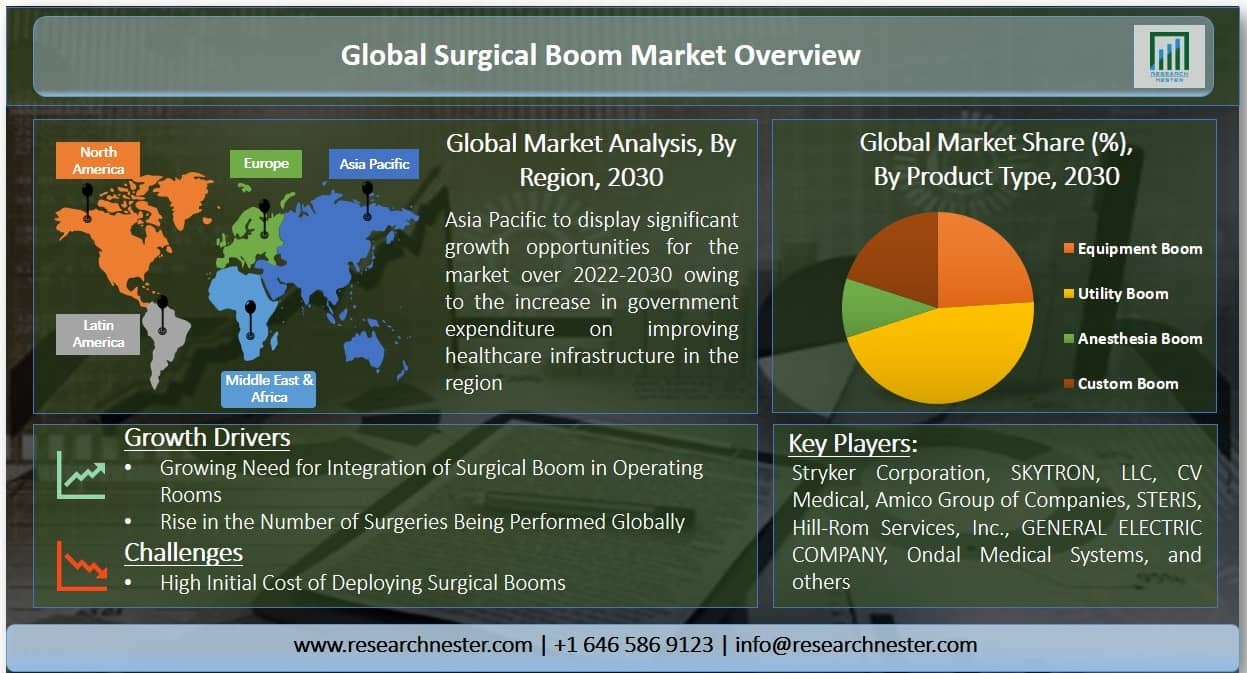 The market is segmented on the basis of product into equipment boom, utility boom, anesthesia boom, and custom boom, out of which the utility boom segment is anticipated to grab the largest share by the end of 2030 on account of the increasing demand for the product ascribing to the presence of advanced features. Utility booms include movable arms that allow flexibility in the positioning of displays and other equipment, which is also projected to contribute to the growth of the segment during the forecast period. Additionally, based on end-user, the medical hospital segment in the global surgical boom market is projected to grow with a significant CAGR over the forecast period. The growth of the segment can be attributed to the fact that a relatively larger number of individuals choose hospital facilities for treatment as a result of the presence of a greater number of operating rooms and associated intensive care units.

Geographically, the market is segmented into North America, Latin America, Europe, Asia Pacific, and the Middle East & Africa region. The market in the Asia Pacific is predicted to grow at the highest CAGR over the forecast period owing to the increase in government expenditure on improving healthcare infrastructure in the region. Additionally, the availability of affordable medical treatment options has resulted in more individuals to avail the medical facilities of the region. Furthermore, the market in North America is evaluated to occupy the largest share in terms of revenue during the forecast period, owing to the presence of leading market players and well-developed healthcare infrastructure in the region. Along with this, North America also leads in terms of technological advancements in the medical sector, which is also expected to contribute to the market growth in the region. Alternatively, the market in Europe is also anticipated to occupy a significant share on account of its proven success in the development of efficient treatment methods, rising adoption of surgical treatments and the increasing geriatric population in the region. As per the Eurostat statistics of the European Region, around 4.3 million cataract surgeries were performed in the European Union member states, making it the most common surgical procedure in 2018. 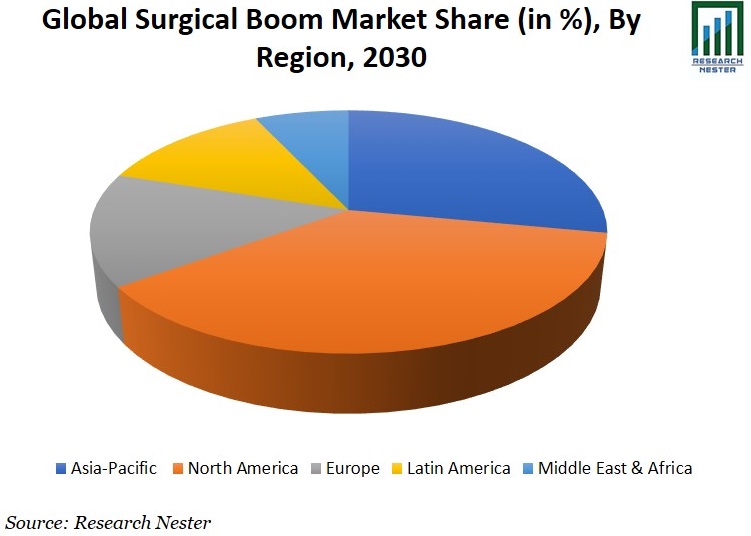 The global surgical boom market is further classified on the basis of region as follows:

Our in-depth analysis of the global surgical boom market includes the following segments:

What are the major factors driving the growth of the surgical boom market?

The growing need for integration of surgical boom in operating rooms and the rapid rise in the number of surgeries performed globally are the key factors driving market growth.

What would be the CAGR of surgical boom market over the forecast period?

What are the challenges affecting the surgical boom market growth?

Which region will provide more business opportunities for growth of surgical boom market in future?

The market in Asia Pacific will provide ample growth opportunities to the market owing to the increase in government expenditure on improving healthcare infrastructure in the region.

Who are the major players dominating the surgical boom market?

The major players dominating the surgical boom market are Stryker Corporation, SKYTRON, LLC, CV Medical, and Amico Group of Companies, among others.

What are the segments in the surgical boom market?

The market is segmented by product type, end-user, and by region.

Which segment under the end-user segment captures the largest market size in the surgical boom market?

With respect to end-user, the medical hospital segment is anticipated to hold the largest market share owing to the presence of a greater number of operating rooms and intensive care units.