The global solar water desalination plant market is estimated to grow at a significant CAGR over the forecast period, i.e., 2022 – 2030. The growth of the market can be attributed to the growing shortage of water across the world, and increasing innovation with solar technology. Desalination of water is the process of obtaining freshwater from saline water, majorly the sea water. This is done to overcome the shortage of water in various regions of the world. The rising issue of water scarcity is estimated to drive the market growth. According to the report by United Nations (UN), around 4 billion people, which is almost two-third of the global population, live in water scarcity. Moreover, 700 million people are approaching this situation. However, the use of fossil fuels for desalination contaminated the water bodies, and polluted the environment, which is why, solar water desalination plants are being adopted widely. Solar plants are effective, environment friendly, and cost effective, which is estimated to boost the market growth. 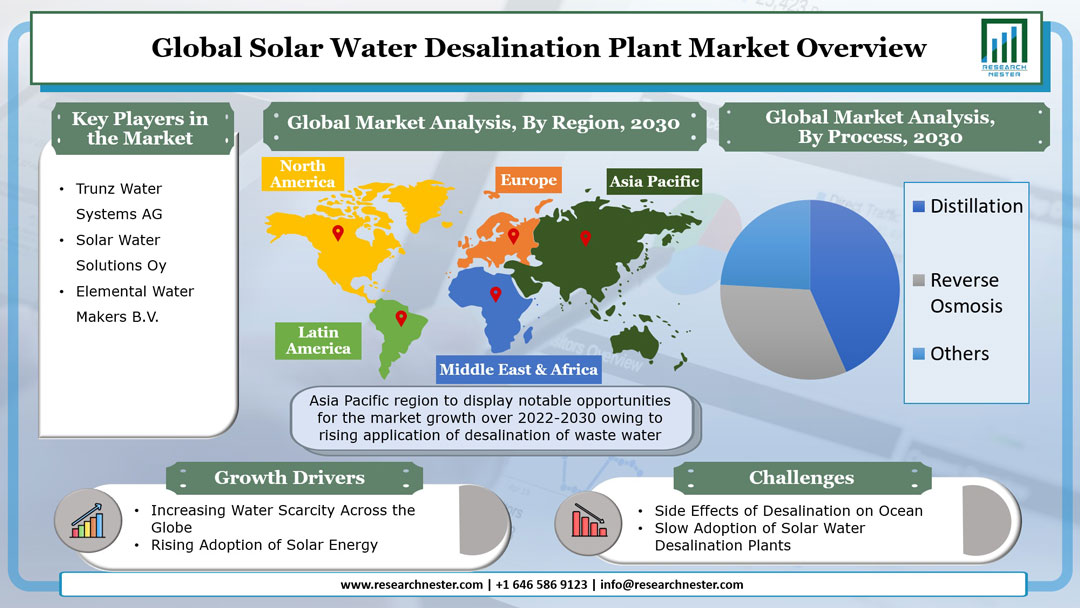 The market is segmented by process into distillation, reverse osmosis, and others, out of which, the distillation segment is anticipated to hold the notable share in the market over the forecast period owing to the higher feasibility of utilizing this process to obtain large quantity of water. For distillation, water is evaporated using the heat of the sun, and then condensed and collected to obtain freshwater. The growing adoption of solar water desalination plants are estimated to boost the market growth. CLICK TO DOWNLOAD SAMPLE REPORT

On the basis of geographical analysis, the global solar water desalination plant market is segmented into five major regions including North America, Europe, Asia Pacific, Latin America and Middle East & Africa region. The market in Middle East and Africa region is estimated to witness noteworthy growth over the forecast period on the back of high dependence on desalination of ocean water to fulfill the water demand. Saudi Arabia is the biggest consumer of desalinated water. Moreover, the abundance of sunlight in the region is anticipated to boost the market growth.

The market in the North America region is anticipated to gain the largest market share throughout the forecast period owing to the growing adoption of water desalination in the countries, such as, United States, and Canada. The waste water is desalinated in the US for domestic and industrial purposes, which is estimated to boost the market growth. 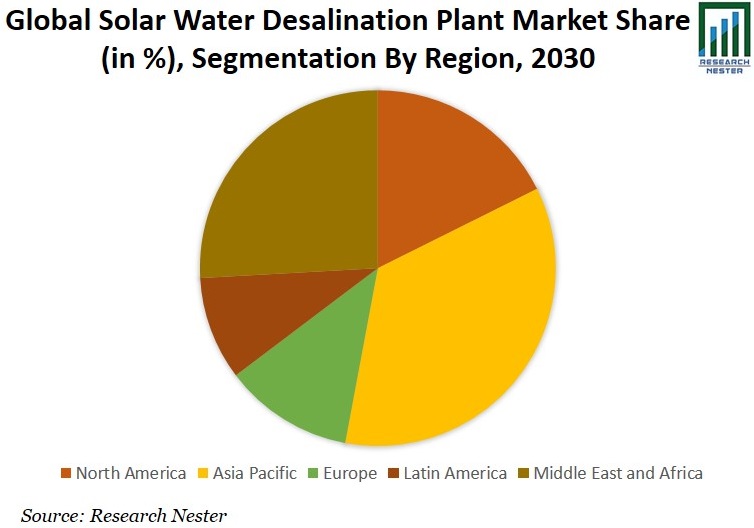 The global solar water desalination plant market is further classified on the basis of region as follows:

The technology of using solar energy for water desalination was invented by the scientists of MIT and China. Trunz Water Systems AG, Solar Water Solutions Oy, and Elemental Water Makers B.V., are some of the major market players currently dominating the market. However, companies, such as, Tesla Inc., are estimated to invest in this technology. The market is open for new players, and is estimated to provide major growth opportunities in the upcoming years.

What are the major factors driving the growth of the solar water desalination plant market?

The growing global water shortage and increasing adoption of desalinated water is estimated to boost the market growth.

What would be the CAGR of solar water desalination plant market over the forecast period?

What are the challenges affecting the solar water desalination plant market growth?

The negative effects of desalination on water bodies are estimated to hamper the market growth.

The market in the North America region is estimated to gain largest market share over the forecast period, owing to the increasing application of desalination of waste water to use it for residential and industrial purposes.

Who are the major players dominating the solar water desalination plant market?

What are the segments in the solar water desalination plant market?

The market is segmented by process, application, and by region.

The industrial segment is anticipated to hold largest market size over the forecast period and display significant growth opportunities.

Wellhead Equipment Market Segmentation by Type (Casing Heads, Tubing Adapters, and Others); by Component (Hanger, Flange, Master Valve, Choke, and Others); and by Application (Onshore, Offshore, and Others) – Global Demand Analysis & Opportunity Outlook 2030

Instrument Transformer Market Segmentation by Type (Current Transformer, and Voltage Transformer); by Application (Transformer and Circuit Breaking, Relaying, Voltage Metering and Protection, and Others); and by End-User (Industrial, Utility, and Others) – Global Demand Analysis & Opportunity Outlook 2030