The global sodium chlorate market is estimated to garner a large amount of revenue and grow at a CAGR of ~5% over the forecast period, i.e., 2022 – 2030. The growth of the market can be attributed largely to the increasing usage of sodium chlorate for applications such as tanning and finishing leather, and manufacturing of dyes as a result of its excellent oxidizing properties. Along with this, high utilization of the product in paper & pulp industry as a bleaching agent for on-site generation of chlorine dioxide is also expected to drive market growth in the upcoming years. Furthermore, growing use of sodium chlorate for vegetation control on fence ways and roadsides is projected to augment the sales of the product in the near future. 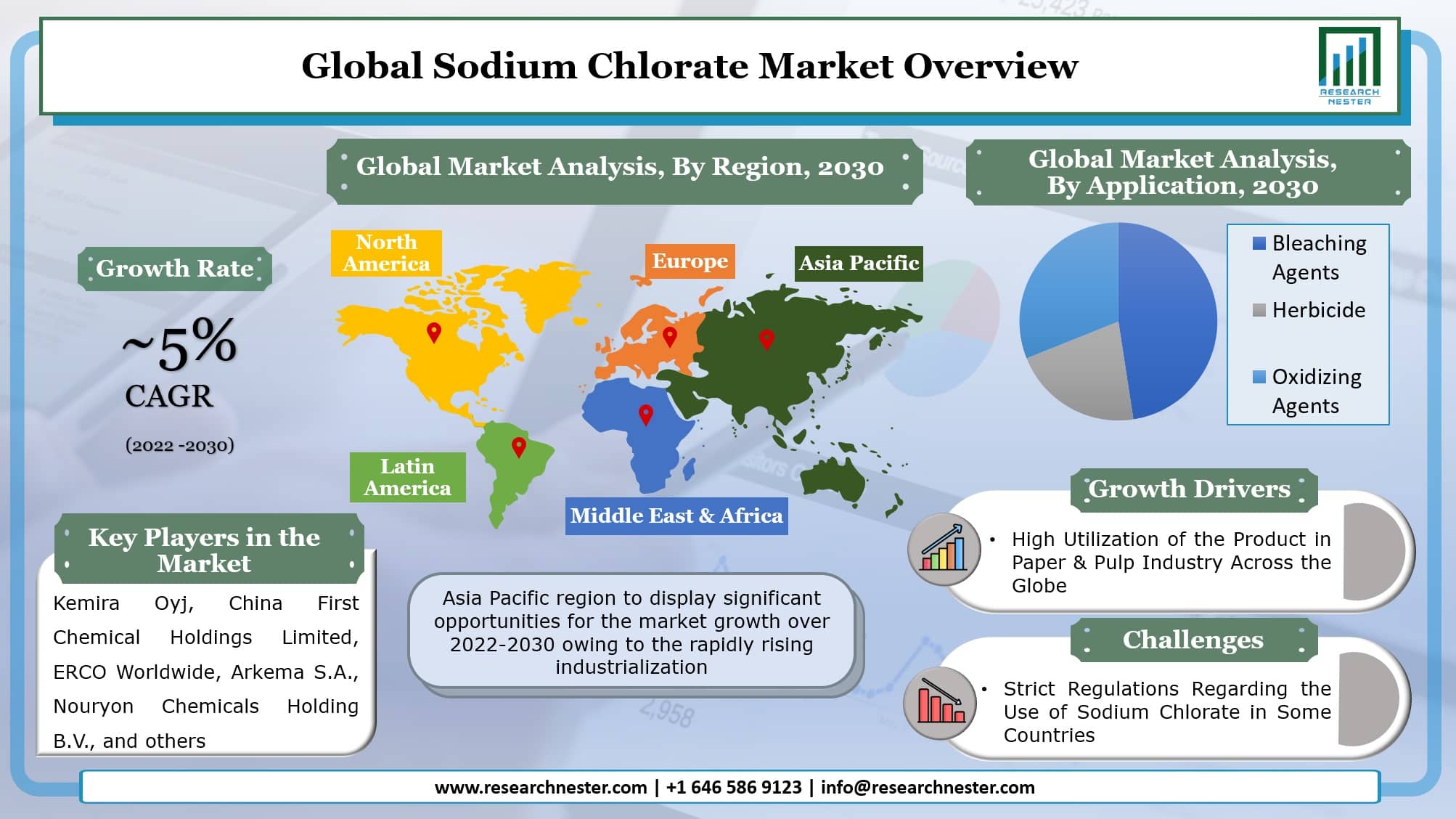 The market is segmented by application into bleaching agents, herbicide, and oxidizing agents, out of which, the bleaching agents segment is anticipated to hold the largest share in the global sodium chlorate market. This can be accounted primarily to the high usage of sodium chlorate as a bleaching agent in the paper industry for manufacturing high quality and environmentally friendly white paper products. Additionally, on the basis of form, the crystalline segment is assessed to acquire the largest share during the forecast period owing to the ability of crystalline form to provide well-defined surface area to improve the bleaching process. Apart from this, growing use of sodium chlorate crystals for making explosives is also predicted to boost the growth of the market segment in the coming years.CLICK TO DOWNLOAD SAMPLE REPORT

On the basis of geographical analysis, the global sodium chlorate market is segmented into five major regions including North America, Europe, Asia Pacific, Latin America and the Middle East & Africa region. The market in the Asia Pacific is estimated to witness noteworthy growth over the forecast period on the back of increasing establishment of new paper industries, and rapidly growing industrialization in the region. Moreover, the market in North America is anticipated to occupy the largest share over the forecast period, which can be credited to the large presence of paper industry in Canada, and rising technological advancements to develop improved product. As per the data provided by the Statistics Canada agency, the manufacturing revenue of pulp, paper and paperboard mills industry in the country reached a value of USD 15.65 billion in 2018, up from USD 13.73 billion in the year 2017. In addition, strong presence of major market players is also expected to propel the region’s market growth in the near future. 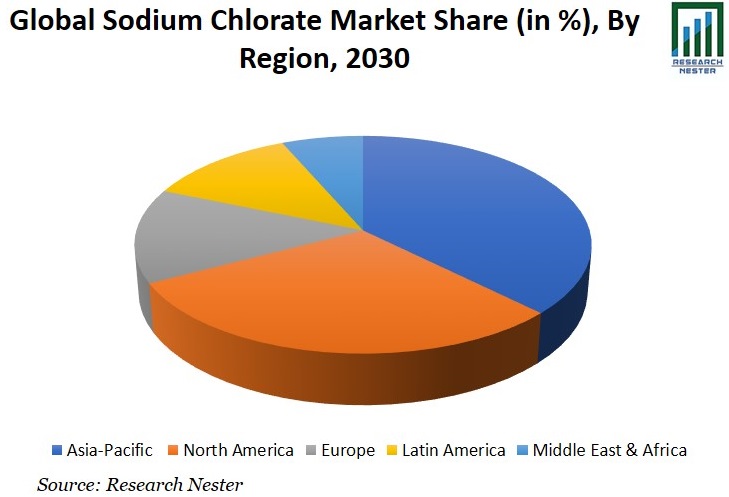 The global sodium chlorate market is further classified on the basis of region as follows:

Our in-depth analysis of the global sodium chlorate market includes the following segments:

What are the major factors driving the growth of the sodium chlorate market?

The major factors driving market growth are increasing use of the sodium chlorate for tanning and finishing leather, and manufacturing of dyes, and high utilization of the product in paper and pulp industry.

What would be the CAGR of sodium chlorate market over the forecast period?

What are the challenges affecting the sodium chlorate market growth?

Stringent regulations associated with the usage of sodium chlorate in some countries are estimated to hamper the market growth.

Which region will provide more business opportunities for growth of sodium chlorate market in future?

Asia Pacific will provide more business opportunities for market growth owing to the increasing establishment of new paper industries, and rapidly growing industrialization in the region.

Who are the major players dominating the sodium chlorate market?

The major players in the market are Kemira Oyj, China First Chemical Holdings Limited, ERCO Worldwide, Arkema S.A., and others.

What are the segments in the sodium chlorate market?

The market is segmented by form, application, end user, and by region.

Which segment captures the largest market size in the form segment in the sodium chlorate market?

The crystalline segment is anticipated to hold largest market size and is estimated to grow at a notable CAGR over the forecast period and display significant growth opportunities.