The global social robot market is estimated to grow at a CAGR of ~35% over the forecast period, i.e., 2022 – 2030. The growth of the market can be attributed to the growing adoption of robotics and automation amongst various industrial verticals, along with rapid technological advancements. Social robots are interactive, and can help in various sectors, including healthcare, education, and eldercare. Development of synergetic interaction methods for communicating with the robots, such as, one-to-one conversation and eye gaze, are estimated to boost the demand for social robots. Prior to this, robots were widely deployed in construction, and medical sectors as well. Social robots are primarily used for therapies, for instance, in case of autistic children, as robots can provide positive social behaviors, without any setbacks to the children. The increasing incidences of disorders, such as, autism, and growing awareness regarding the treatment are projected to boost the market growth. 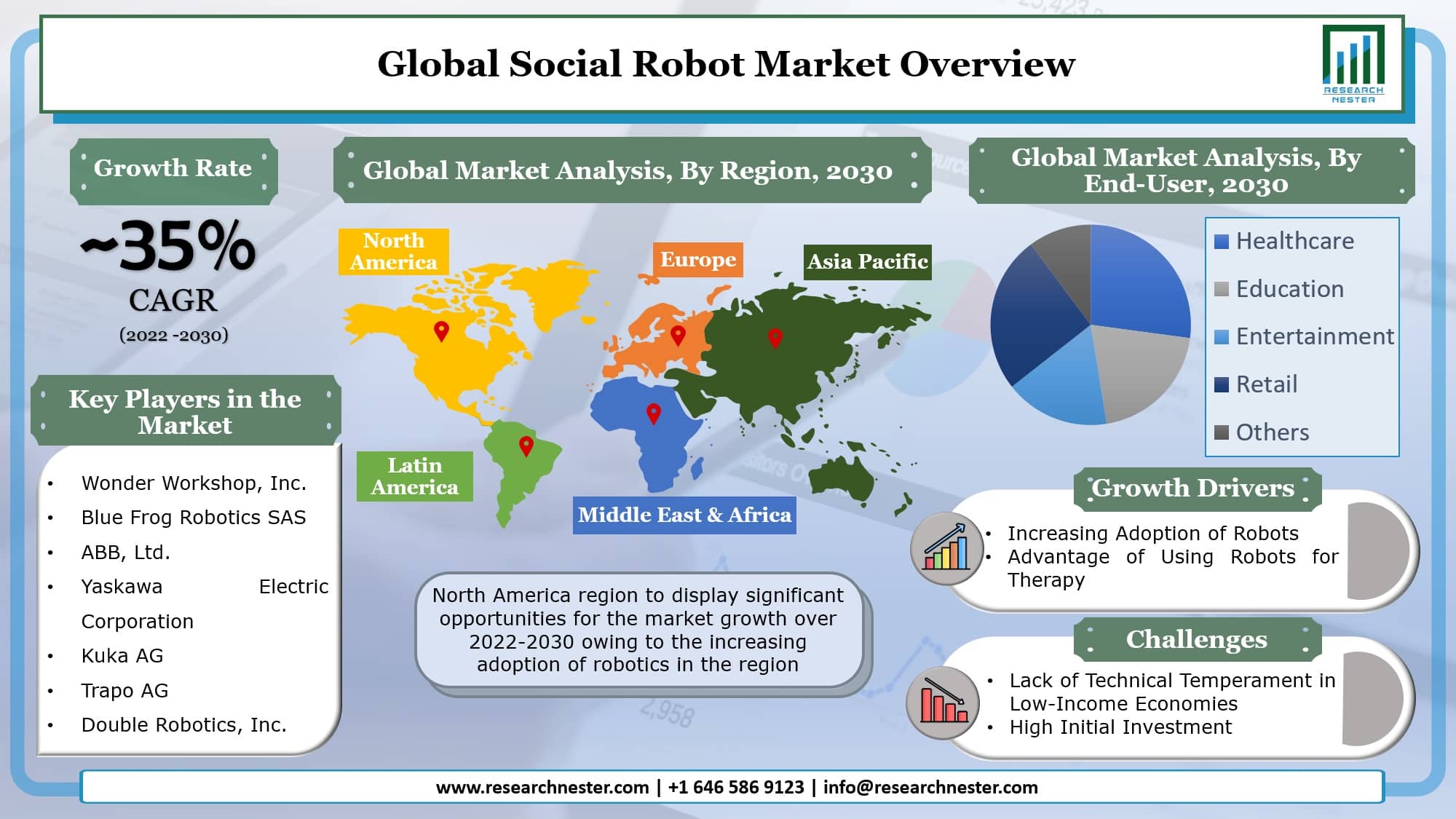 The market is segmented by end-user into healthcare, education, entertainment, retail, and others, out of which, the healthcare segment is anticipated to hold the notable share in the global social robot market over the forecast period on account of increasing demand for robots for treatment and post-treatment care. According to the data by the World Health Organization (WHO), one in 160 children suffers with autism spectrum disorder. It is slightly different from the robotics assisted medical care, where robots and automation are used for conducting surgeries. Social robots are primarily used for physical and behavior therapy, as it saves cost, training, and can provide quicker results.

On the basis of geographical analysis, the global social robot market is segmented into five major regions including North America, Europe, Asia Pacific, Latin America and Middle East & Africa region. The market in Europe region is estimated to witness noteworthy growth over the forecast period on the back of increasing adoption of robotics in the region, along with the rising investment in technological development activities. Countries, such as, Sweden, Germany, and United Kingdom are escalating in technological advancement, with adoption of new technologies in every sector.

The market in the North America region is anticipated to gain the largest market share throughout the forecast period owing to the shift in consumer behavior towards automation and digitalization, coupled with advancement in technologies in the region. Moreover, the growth in advanced technologies such as Artificial Intelligence, Augmented Reality, and others, are estimated to boost the regional market growth. 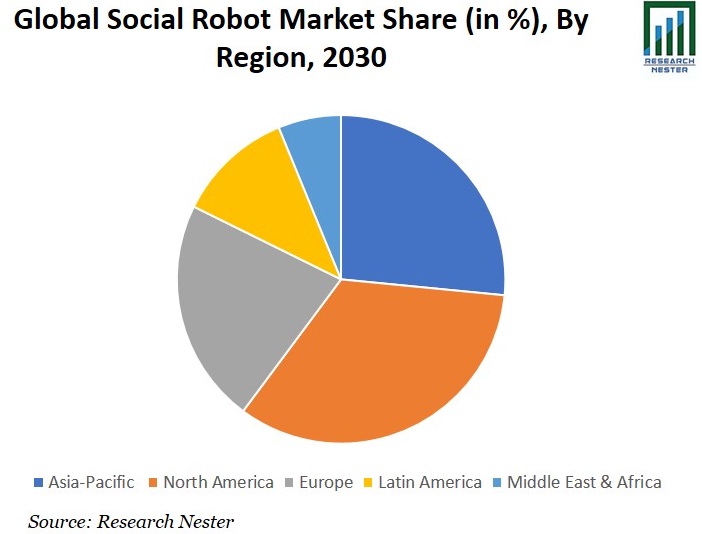 The global social robot market is further classified on the basis of region as follows:

Our in-depth analysis of the global social robot market includes the following segments:

What are the major factors driving the growth of the social robot market?

The growing adoption of automation and robotics is estimated to boost the market growth.

What would be the CAGR of social robot market over the forecast period?

What are the challenges affecting the social robot market growth?

Lack of technical temperament in low-income economies, and high initial investment are estimated to hamper the market growth.

Which region will provide more business opportunities for growth of social robot market in future?

The market in the North America region is anticipated to provide more business opportunities over the forecast period, owing to the increasing adoption of robotics in the region.

Who are the major players dominating the social robot market?

What are the segments in the social robot market?

The market is segmented by component, application, end-user, and by region.

Which segment captures the largest market size in application segment in the social robot market?

The consulting segment is anticipated to hold largest market size over the forecast period and display significant growth opportunities.