In terms of region, global smart wearable device market is segmented into five major regions including North America, Europe, Asia Pacific, Latin America and Middle East & Africa Region. Among these regions, North America region is dominating the global smart wearable device market followed by Asia Pacific region. High adoption rate of wearable technology and rising consumer’s awareness towards wearable technologies are some major factors which have led the North America to leading position. Further, North America is expected to behold this position over the forecast period. Apart from this, Europe region is also expected to witness a remarkable growth during the forecast period due to high adoption rate of wearable technologies among consumers in this region.CLICK TO DOWNLOAD FREE SAMPLE REPORT 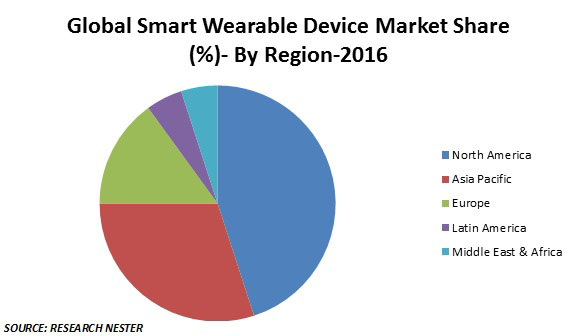 Global smart wearable device market is further classified on the basis of region as follows:

The global smart wearable device market is segmented as follows: