Extensive insights into the Growth of Smartwatch Market amidst COVID-19

· Fitbit had entered into a partnership with FibriCheck, an innovative health screening app, that will enable users in Belgium, The Netherlands, Ireland and the UK to monitor their heart rhythm for irregularities, such as Atrial Fibrillation (Afib) directly from their Fitbit smartwatch. The FibriCheck software is CE marked and is meeting the performance standards for medical devices in the European Union (EU). The FibriCheck app runs on Fitbit OS and uses Fitbit’s commercial-grade PPG (photplethysmography) sensors which is a light based technology that is responsible for measuring the rate of blood flow to capture heart rhythm measurements from a user’s wrist.

A smartwatch is a wearable device which is designed in order to be worn on a wrist. Smartwatches possess many unique features and perform a variety of functions such as dialing and receiving calls, texting messages, e-mails, social media apps, music player and many others and can be used to sync up with a smartphone. The smartwatch is very compact and can be used with both cellular and GPS network. It consists of various sensors which help in providing details such as calories burnt, heart rate, distance travelled and many more. It contains a wireless chip and provides Bluetooth, Wi-Fi and cellular connectivity. Smartwatches allows the users to use them without the need for holding on to their cell phones, wherever they are present. The users would be able to receive and view e-mails and other notifications through these smartwatches. The functions of these smartwatches are normally carried out through the usage of mobile apps of smartphones.

Smartwatches are equipped with different sensors and algorithms and also are capable of controlling and retrieving data from other instruments or computers. Besides, smartwatches also work as good fitness trackers. Some smartwatches can even record the heart rate of individuals throughout the day and the individuals can view the readings that will be displayed at their convenience. Additionally, the growing smart wearable device market which generated revenues of around USD 16.2 billion in the year 2016 and is estimated to reach a value of around USD 52.5 Billion by the end of 2024, is also estimated to contribute to the growth of the smartwatch market over the forecast period.

The growth of the global smartwatch market is driven by several factors such as increasing sales of smartphones worldwide, rising demand from consumers for wireless health and fitness devices, especially from among those individuals involved in sports activities that includes athletics, swimming, cycling and many more activities. According to International Monetary Fund (IMF), the global demand for smartphones had risen enormously and during the year 2016 alone, the global smartphone sales had touched a high of close to 1.5 billion devices.

The global smartwatch market is anticipated to grow at a CAGR of around 17% over the forecast period i.e. 2020-2027. The market is segmented by operating system, product type, application and by wireless technology, out of which, the health and fitness segment forming part of application segment is anticipated to occupy the highest market share, on account of increased demand for fitness devices that can be connected wirelessly to a smartphone or computer for maintaining a track record of fitness of individuals. According to World Health Organization (WHO), about 17.9 million people die from cardiovascular diseases every year which accounts for an estimated 31% of all deaths worldwide. Considering the gravity of the situation, there is an increasing focus laid on maintaining the health and fitness by individuals who are taking up regular exercises and fitness regime on priority by regularly tracking their health and fitness levels which is estimated to aid the growth of the smartwatch market over the forecast period.  CLICK TO DOWNLOAD SAMPLE

Rising Levels Of Health Awareness Among The Consumers Globally

There has been an increase in the spending by consumers globally on health and fitness gadgets that can continuously monitor their health and levels of physical activity every day. The U.S. Department of Health and Human Services predicts that, by 2030, half of all adults in the United States will be obese. In view of insufficient physical activities that can create several risk factors for individuals in the form of non-communicable diseases such as cardiovascular diseases, cancer and diabetes, several policies have been brought in by WHO member states and are currently put into operation to address insufficient physical activity. Through the use of smartwatches, individuals are able to perform self-monitoring of their physical activities and are able to communicate their health status with their doctors and family members. These factors are anticipated to drive the growth of the market over the forecast period.

The demand for wireless electronic devices is rising, owing to shift towards digitalization and internet connectivity spreading across all regions globally and covering even remote locations globally. The presence of various apps which can be used for various purposes, some of them being playing music, games and several other applications are generating higher demand for smartwatches among consumers. These smartwatches offer wireless connectivity, besides allowing several fitness activities such as the distance travelled, calories burnt, number of steps taken per day and many more to be monitored and tracked by using them. 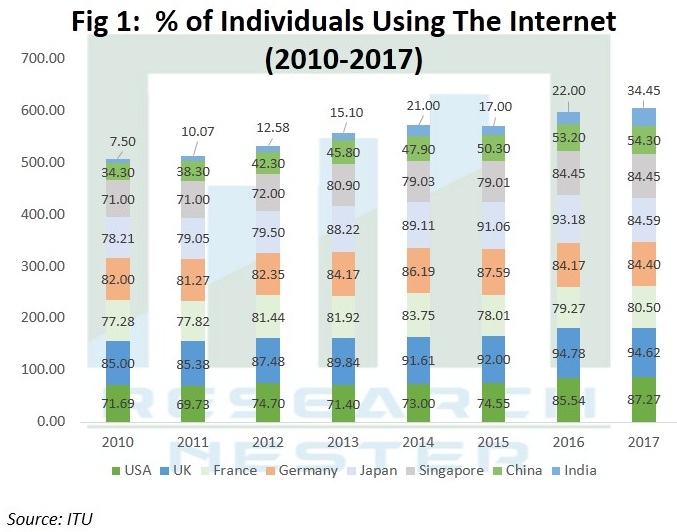 Smartwatches are expensive and are not affordable to an average individual, although they possess multiple features, apart from keeping time. Moreover, they have only a limited battery life and these watches may be able to last only for a day or two after they are fully charged and their battery life is primarily dependent upon the features of a smartphone. In some cases, the power consumption may be high when some features are being used frequently, which could bring down the battery levels of a smartwatch quickly.

On the basis of regional analysis, the global smartwatch market is segmented into five major regions including North America, Europe, Asia Pacific, Latin America and Middle East & Africa region. The market in North America is anticipated to occupy the highest market share, owing to the presence of major market players in the region as well as rapid technological innovations brought into these devices by several market players that make each of them unique in their own way. According to National Institutes of Health, USA, more than 35% of U.S. adults are suffering from obesity and more than 34% of adults are overweight. Obesity affects about 17% of all children and adolescents in the United States. High levels of obesity prevailing among the population in the USA and rising awareness among the American population about obesity and its ill effects on health of individuals is one of the major factors that is anticipated to generate the demand for smartwatches among the general population in the USA and is estimated to drive the growth of the market in the region over the forecast period. The market in Asia Pacific is estimated to grow rapidly, owing to the rising number of skilled tech-savvy professionals and rise in the number of individuals with higher disposable incomes in the region over the last decade.

The global smartwatch market is further classified on the basis of region as follows: