Smart Firewall Market Segmentation by Type (Cloud, Hardware, and Virtual); by Service (Professional, Support& Maintenance, and Others); and by End-User (Government, Healthcare, BFSI, and Others) – Global Demand Analysis & Opportunity Outlook 2030

The global smart firewall market is estimated to garner a significant CAGR over the forecast period, i.e., 2021–2030. The growth of the market can be attributed to the security provided by smart firewall against improper connection attempts, port scans, and intrusions, and blocks cybercriminals and other unauthorized traffic. The rising incidences of cybercrimes is estimated to drive the market growth. Moreover, the increasing trend of IoT (Internet of Things) among common public, with global IoT market crossing the revenue share of over USD 200 billion in 2019, along with rising internal and external privacy breaches through internet, is expected to boost the market growth. As per the statistics by the World Bank, in 2017, 48.997% of the global population used internet. As per our analysis, in 2019, this share reached approximately 51%, with over 4 billion internet users in the world. 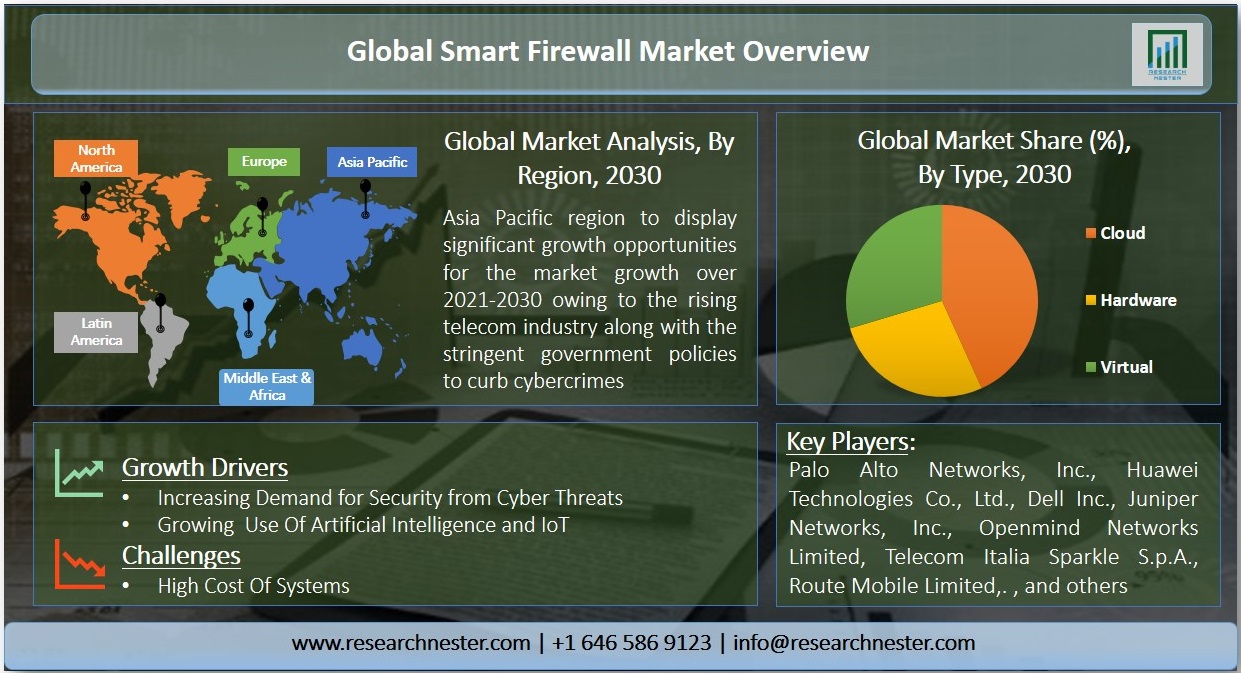 The global smart firewall market is segmented by type into cloud, hardware, and virtual, out of which, the cloud segment is anticipated to hold the notable share in the market during the forecast period on account of increasing adoption of cloud-based technology as it is cost saving, automatically integrated, reliable, and has unlimited storage capacity. On the basis of service, the market is segmented into professional, support & maintenance, and others, out of which, the professional segment is anticipated to hold a substantial share throughout the forecast period, as professional service providers provide a customized and selectively tailored security solution to end-users, to meet their goals. CLICK TO DOWNLOAD SAMPLE REPORT

Regionally, the smart firewall market is segmented into five major regions including North America, Europe, Asia Pacific, Latin America and Middle East & Africa region. The market in North America region is estimated to garner largest share over the forecast period on the back of increasing adaptation of novel technologies by the government as well as the public, in countries, such as, the U.S. and Canada. Moreover, the high preference of smart firewall amongst the major companies for the security of their sensitive data and consumer privacy, is estimated to boost the growth of the regional market. Furthermore, the growing IT sector in the U.S., with over 30% of the global tech market, is also estimated to promote the market growth. The IT sector expenditure in the U.S. crossed USD 4.5 trillion in 2019, holding the largest share in the world.

The market in the Asia Pacific region is estimated to witness highest CAGR over the forecast period on the back of growing telecom sector and evolving technology, along with stringent government regulations for protection against cybercrimes. Moreover, growing IoT market in countries, such as, China, and India, is estimated to boost the market growth. The total expenditure on Internet of Things of China valued over USD 170 billion in 2019. Additionally, there are over 850 million internet users in China, and around 565 million internet users in India, as of 2020. 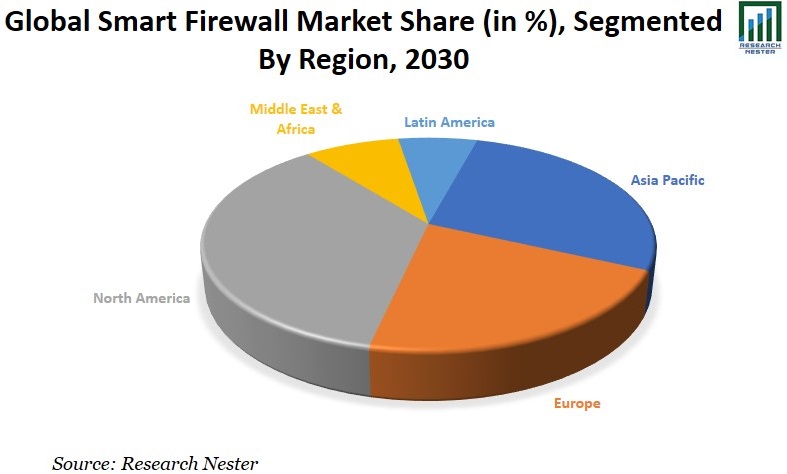 The global smart firewall market is further classified on the basis of region as follows:

Our in-depth analysis of the global smart firewall market includes the following segments:

What are the major factors driving the growth of the smart firewall market?

Increasing privacy threats and data theft due to rising internet penetration is one of the major factors promoting the growth of the market.

What would be the CAGR of smart firewall market over the forecast period?

What are the challenges affecting the smart firewall market growth?

High cost of systems, and lack of maintenance are some of the factors estimated to hamper the market growth.

Which region will provide more business opportunities for growth of smart firewall market in future?

The market in the Asia Pacific is estimated to witness maximum growth opportunities during the forecast period, on the back of growing telecom industry in the region, along with high adoption of IoT.

Who are the major players dominating the smart firewall market?

What are the segments in the smart firewall market?

The market is segmented by type, service, end-user, and by region.

Which sub-segment captures the largest market size in the service segment in the smart firewall market?

The professional segment is anticipated to hold largest market size over the forecast period owing to the availability of customizable solutions provided by professional service providers to cater the varied needs of end-users.