The sildenafil citrate, popularly known as ‘viagra’, is used to treat erectile dysfunction and pulmonary arterial hypertension in males. This form of medication is usually taken through mouth as a tablet or an injection. Sildenafil blocks the enzyme phosphodiesterase 5 (PDE5) and regulates the blood flow into the male reproductive organ leading to sexual arousal. Various studies show the effect is usually within 20 minutes of intake and lasts for 2 hours. Common side effects include headache, heartburn and skin abnormalities. However, rarely it can lead to prolonged erection and vision problems. The leading pharmaceutical company, Pfizer discovered the medication in 1989 accidentally while developing a cure for heart-related chest pain.

The increase in erectile dysfunction cases on account of the rising cases related to heart diseases, diabetes, obesity, blood pressure, tobacco and alcohol consumption, depression, stress, food habits along with an ageing population are estimated to contribute to the market growth. Based on its use, the market is bifurcated into medical and non-medical usage, out of which, the largest share in the market is estimated to be held by medical segment in order to treat erectile dysfunction in men. This can be attributed to its low cost in the market and the requirement of a prescription by medical professionals. The market is further segmented by distributed channel into online and offline distribution channels. Among these segments, the offline segment is anticipated to continue holding the leading share in the market since it was the highest revenue generating segment in 2019 owing to the rising availability of the product. Additionally, the high product awareness is driving also contributed to the growth of the segment. CLICK TO DOWNLOAD SAMPLE 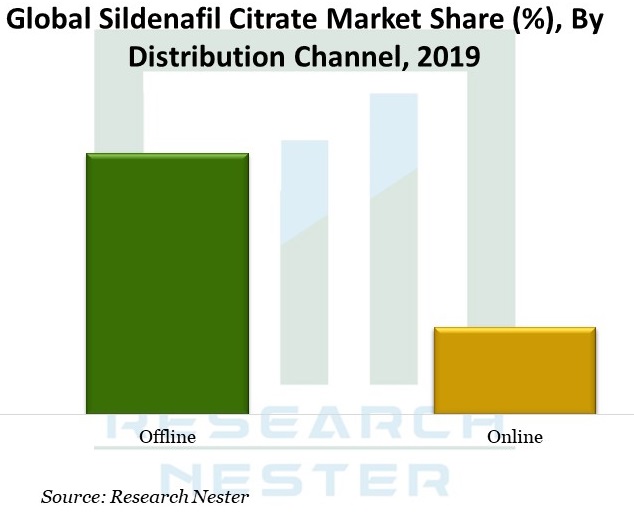 It is estimated that ageing in men increases the risk of erectile dysfunction in them. However it is stated that ED can occur at any age, but most common in older men. ED can be also be caused by heart-related diseases, diabetes, obesity, tobacco and alcohol consumption. According to the WHO, the proportion of world’s population over 60 years is estimated to nearly double from 12% to 22% between 2015 and 2020. Further, it was reported by IHME, that in 2017, 4.7 million deaths globally were caused by obesity and majority of the cases were reported in urban areas of the world where reduced activity and poor diets are attributed to accelerate the rise of it. Ageing population, prevalence of cardiovascular diseases, obesity and high consumption of alcohol and tobacco are factors contributing to increase in the number of ED cases and thus expected to positively impact the sildenafil citrate market.

Awareness towards ED by Governments and NGOs

Adult males shy away from the topic of ED in public discussions. Understanding and acceptance about ED and its prevalence among adult males through awareness programs by governments and NGOs is expected to drive the sildenafil citrate market forward.

COVID-19 and its Aftermath

The WHO, as of May 10th 2020, reported 3,917,366 confirmed cases and over 274,361 deaths globally due to COVID-19. The death toll is high among people suffering from various other illnesses like pneumonia, coronary heart diseases, cancers and others prior to COVID-19. It is estimated that almost half of earth’s population is under lockdown as per measures taken by respective governments across the world. Online pharmacies pointed to the fact that sales of sildenafil citrate medication have significantly increased. The UNICEF estimates that globally 116 million births will occur in the upcoming nine months post COVID-19. The global pandemic is expected to increase the market growth significantly.

The availability of alternatives such as Tadalafil (Cialis), Vardenafil (Levitra) and Vardenafil (Staxyn) is expected to negatively impact the sales of sildenafil citrate medication and thus hamper the market growth in the coming years.

Our in-depth analysis of the sildenafil citrate market includes the following segments:

On the basis of regional analysis, the sildenafil citrate market is segmented into five major regions including North America, Europe, Asia Pacific, Latin America and Middle East & Africa region. The market in North America is anticipated to hold the largest share in the market on account of presence of leading market players in the region which manufacture and market sildenafil citrate. Higher number of ED cases in the region are further attributed to increase the demand for sildenafil citrate tablets. The market in Asia Pacific region is predicted to grow at the highest rate during the forecast period as a result of ageing population in countries such as India, China, Japan and increase in awareness towards erectile dysfunction and related disorders.

The Sildenafil Citrate market is further classified on the basis of region as follows: