The global silage film market is estimated to garner noteworthy revenue by the end of 2033 by growing at a CAGR of ~5% over the forecast period, i.e., 2023 – 2033. Further, the market generated remarkable revenue in the year 2022. The growth of the market can primarily be accounted to the skyrocketing livestock population across the globe. For instance, the number estimated for cattle in 2018 was nearly 950 million head which was projected to reach approximately 1000 million head in 2022. 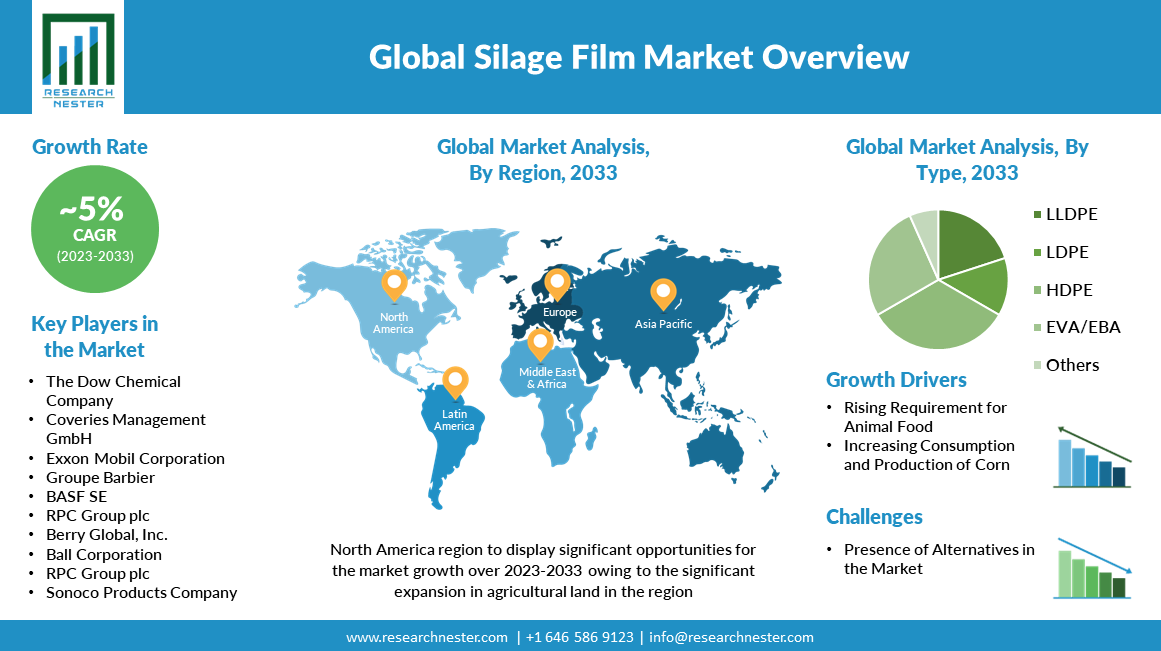 Global silage film market trends such as, the growing need for permanent pasture and increasing demand for silage wrap films worldwide are projected to influence the growth of the market positively over the forecast period. As of 2022, only 250,000 hectares of land were being used as permanent pastures in the UK which is expected to witness a decrease over the decade. Silage films are highly utilized by farmers to preserve maize, silage, and hay. Silage films are helpful to keep the nutritional values of the product wrapped in them. Hence, such utilization is anticipated to push the market growth over the forecast period.

For instance, more than 5500 facilities solely in the United States are projected to produce nearly 250 million tons of animal food every year.

Silage films are commonly used to prevent hay and maize from rotting away for a long time. The animal food such as grass and crops are gathered in round or square bales and then these bales are covered with silage films. Silage films are quite useful for keeping the hay from extreme weather conditions

As of 2021, nearly 100 million tons of corn for silage were produced solely in the United States.

For instance, about 350 million metric tons of corn were produced in the USA in 2021-22, meanwhile, the consumption of corn was projected to be nearly 10 billion bushels in a similar period.

In 2018, the central and state government of India spent nearly 145 billion Indian rupees on animal husbandry.

The global silage film market is segmented and analyzed for demand and supply by type into LLDPE, LDPE, HDPE, EVA/EBA, and other, out of which, the HDPE segment is projected to witness noteworthy growth over the forecast period. The growth of the segment can be accounted to the growing demand for high-density polyethylene. For instance, the production of HDPE is anticipated to be approximately USD 65 million metric tons in 2022.

Regionally, the global silage film market is studied into five major regions including North America, Europe, Asia Pacific, Latin America and Middle East & Africa region. Amongst these markets, the market in the Asia Pacific region is projected to hold the largest market share by the end of 2033. The growth of the market in the region can be ascribed to the significant expansion in agricultural land. For instance, as of 2019, around 50% of the agricultural land was utilized for arable land crops. Furthermore, ongoing technological advances in the region are also estimated to push the market growth in the region over the forecast period. 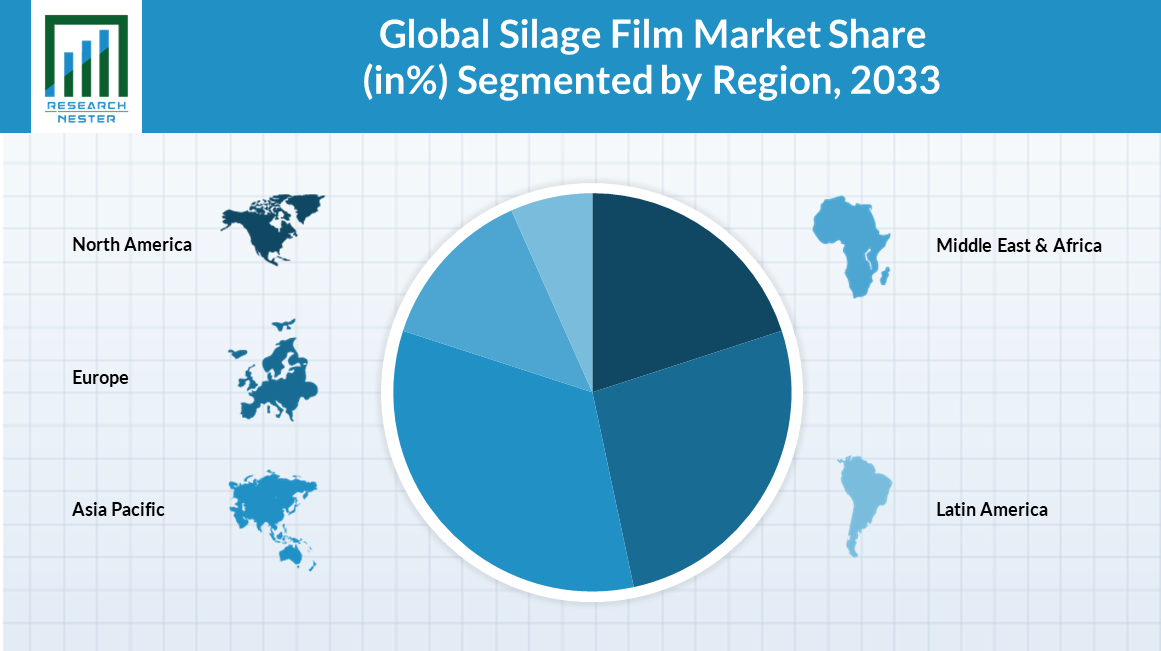 The global silage film market is further classified on the basis of region as follows:

Our in-depth analysis of the global silage film market includes the following segments:

What are the major factors driving the growth of the silage film market?

Rising requirements for animal food and increasing consumption and production of corn are estimated to majorly boost the market growth.

What would be the CAGR of silage film market over the forecast period?

What are the challenges affecting the silage film market growth?

The presence of alternatives in the market is estimated to challenge the market growth.

Which region will provide more business opportunities for growth of silage film market in future?

The market in Asia Pacific region is projected to hold the largest market share by the end of 2033 and provide more business opportunities in the future.

Who are the major players dominating the silage film market?