The agricultural film, which is observed like a modern-day application, is used in numerous innovative agrarian practices. Soil solarization is one of the best common practices in progressive agriculture. Films decrease the exposure of soil and seeds, thus reducing the impact of weed seeds, preserve soil moisture & nutrients, and lessen soil compaction. Films are furthermore used broadly in protected cultivation.

The agricultural films market is expected to observe an attainable high CAGR during the forecast period, i.e., 2020-2028. The market is segmented by type, application, and region. Among product applications, the mulch film segment accounted for the largest market share in the agricultural films market. As most of the global area for farming is under open cultivation, the practice of mulching the soil with films has become a shared practice. While cultivating fruits and vegetables, the implementation of mulch films has revealed maximum growth. Since fruits and vegetables are high-value yields and the estimated returns over costs are much greater, mulching has been implemented as a standard practice in many nations. In developing marketplaces, the practice of mulching, drip irrigation, and protected agriculture, as amalgamation has been an emerging trend, in fruits and vegetables. Further mulch films can maintain soil temperature & soil water preservation.

The greenhouse application segment is anticipated to attain significant revenue during the forecast period as it permits eco-friendly agriculture, which is a crucial factor to protect the environment. Factors such as growing demand for floriculture and horticulture and unreliable climatic conditions are projected to enhance the segment expansion.

Silage is expected to have great market potential in the foreseeable future as it can be used as fodder for mammals and as a biofuel feedstock. It also enhances milk production.CLICK TO DOWNLOAD SAMPLE REPORT 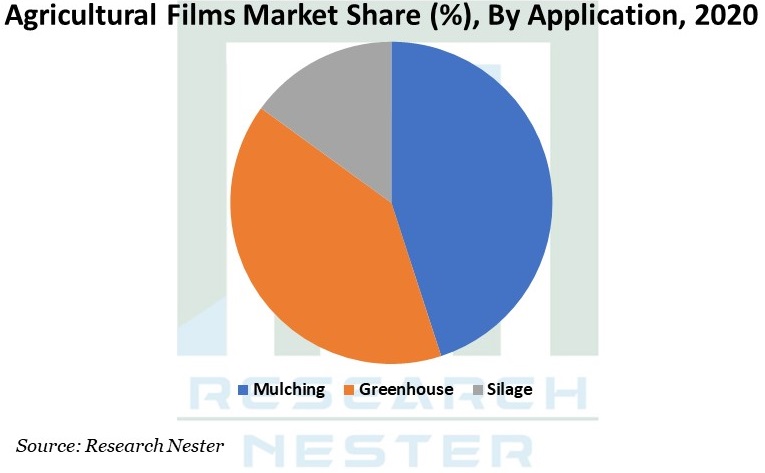 The need for enhancing agricultural productivity amongst farmers owing to the rising food demand of the burgeoning population is the encouraging factor that motivates them to indulge in the agricultural films market. Farmers are projected to the usage of agricultural films owing to its flexibility and since it’s easy to produce material.

Additionally, growing investment opportunities by small and big market entrants, soaring demand for agricultural films from the dairy industry, shifting to environment-friendly resources to produce agricultural films, are also expected to benefit the market growth significantly over the forecast period.

The agrarian sector is severely impacted by the COVID 19 outbreak that has compelled all the industries to come at a halt. However, crop cultivation and irrigation have succeeded to survive in developing nations such as Pakistan, India, South Africa, China, and others, especially in India where the agriculture sector is one of the foremost contributors towards their GDP.

Furthermore, the technological advancements in the existing agricultural films, fall in labor costs, strong government policies supporting the associated cause, and growing awareness in the developing nations projected to boost the overall market growth during the forecast period.

The installation charges for agricultural films is very high since it requires technical skills to install the material as per the farming needs, then the disrupted supply chain due to the COVID 19 outbreak, lack of awareness in some regions, and use of non-eco-friendly resources while producing the films are not appreciated by various organizations and groups, together all these factors are some of the key market restraints that are expected to hamper the overall market growth in the forecast period.

Our in-depth analysis of the agricultural films market includes the following segments:

It is anticipated that Asia-Pacific would have the paramount growth potential as the region has several developing nations, that are reliant on agriculture. Various government initiatives, investments for better environment and advanced farming equipment, the necessity of superior quality agricultural produce, expanding import & export situation, coupled with the burgeoning population in the region, are the major factors, contributing towards the overall growth in these regions. Additionally, the agro-climatic environment and a high percentage of available agrarian land in countries such as China, Japan, and India are expected to drive the growth of the agricultural films market in the region.

The North American market is projected to register for the second-largest share in the global market owing to the amplified demand for agricultural films while harvesting crops such as corn, wheat, and soybean.

Although European markets are projected to embrace the highest manufacturers of agricultural films, North America however is estimated to lead the consumption of the material as it has adopted advanced agricultural techniques. The authorization of recreational marijuana in Canada, hemp farming in the U.S., and intense liberalism regarding medical marijuana across Europe, are together anticipated to create lucrative opportunities for industry players in the agricultural films market.

However, in developing countries such as India, China, South Africa, Pakistan, and others, the economic slowdown activated due to the COVID 19 pandemic can trouble the overall agriculture segment and a halt in global supply chain management.

The agricultural films market is further classified based on region as follows: