The global sag corrector market is anticipated to grow with a moderate CAGR during the forecast period, i.e., 2021-2029. Factors such as the growing need amongst the end-users for quality electrical power, along with the increasing concern amongst business organizations for the burden generated due to the increasing average cost of downtime for each voltage sag event, are anticipated to act as key growth drivers for the growth of the global sag corrector market.

A voltage sag, also known as a voltage dip or voltage drop, is referred to as the phenomenon where a drop in the rms voltage, typically between 10%-90% of nominal voltage, occurs for a momentary period. The event can range from a period of 0.5 cycles to a few seconds. When the voltage sag is for a longer duration, it is then referred to as a sustained sag. A voltage sag can occur either due to natural events, such as lightning, storms, snow, heavy winds, and others, or through human-created events, such as electrical overloading. Voltage sag causes damage to the electrical equipment, and hence a multifunctional voltage instantaneous compensation (MPC) device, also known as interline unified power quality conditioner (iUPQC) device, such as voltage sag corrector or protector is used to prevent such events. Recently, with the advancements in electrical and electronics technology, a new category of product, known as dynamic sag corrector (DySC), has become readily available in the market. The basic working principle of dynamic SAG correctors is different for single phase and three phase wiring types. The topology of DySC for both these wiring types is given below: CLICK TO DOWNLOAD SAMPLE REPORT

The global sag corrector market is thriving on account of the numerous beneficial properties of sag correctors over its alternatives, such as uninterrupted power supply (UPS) systems, coupled with the growing digitization of electrical distribution networks, which raises numerous challenges in terms of delivering enhanced power quality. The key difference between a UPS and a sag corrector is that the UPS delivers the electric load from the batteries whenever it detects a low incoming voltage from the incoming power system, whereas a sag corrector is usually battery-free and corrects the voltage sag by drawing additional current from the source. As batteries are expensive and require timely replacement and maintenance, hence UPS is not cost-effective when compared to a sag corrector. Alternatively, the increasing voltage fluctuations observed in grid power, which significantly raises employee downtime and overall operating cost of the business organizations are anticipated to raise the demand for the deployment of sag correctors in recent years. Further, the growing focus of governmental bodies for the development of standards for electrical and electronic equipment is additionally anticipated to contribute to the market growth. For instance, the SEMI F47 voltage sag immunity standard was proposed by Semiconductor Equipment and Materials International (SEMI). This standard requires the tools to be immune to voltage sags. As a result, manufacturers of voltage sag correctors are increasingly complying with the standards to deliver enhanced sag correctors, thereby further contributing to the rising demand for sag correctors.

The market is segmented by end-user industry into retail, healthcare, commercial, industrial, IT, manufacturing, and others, out of which, the manufacturing segment is projected to hold the largest market share by the end of 2021. The growth of the segment can be attributed to the significant dependence of manufacturing industries on electrical energy to power the equipment deployed in the factories, along with the increasing concern for power quality issues that significantly hampers their overall productivity. According to the statistics by the United States Energy Information Administration, the net electricity demand in the manufacturing sector grew from 2437 trillion Btu in the year 2010 to 2591 trillion Btu in the year 2018. 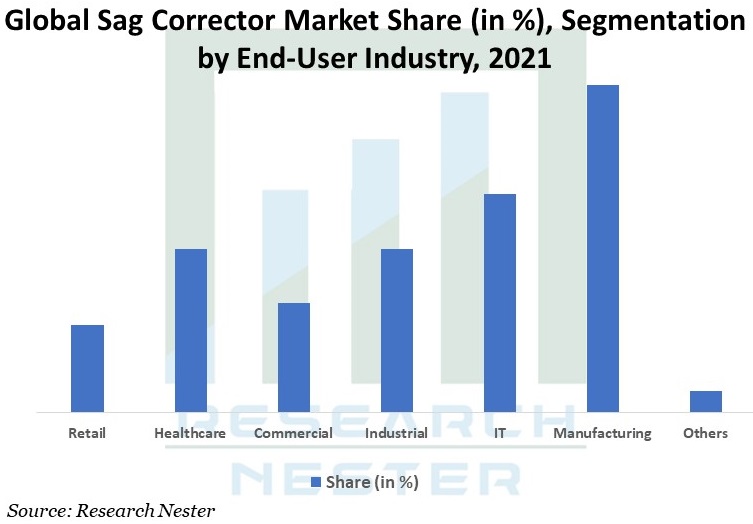 Growing Need Amongst Organizations to Lower Their Downtime Costs

Owing to the poor power quality transmitted by the grid, business organizations often face numerous challenges, especially while running their equipment. A voltage sag event results in an unscheduled downtime event, thereby raising the cost of labor, unplanned repair/maintenance cost of equipment, and others. The cost of operations further increases when the plant is running at full capacity, leading to lost sales or revenue. On account of such factors, there is a rising need amongst business organizations to deploy sag correctors which can correct the output voltage during a voltage sag event, and further lower the number of unscheduled downtime events. Such a factor is therefore anticipated to drive the growth of the global sag corrector market during the forecast period. 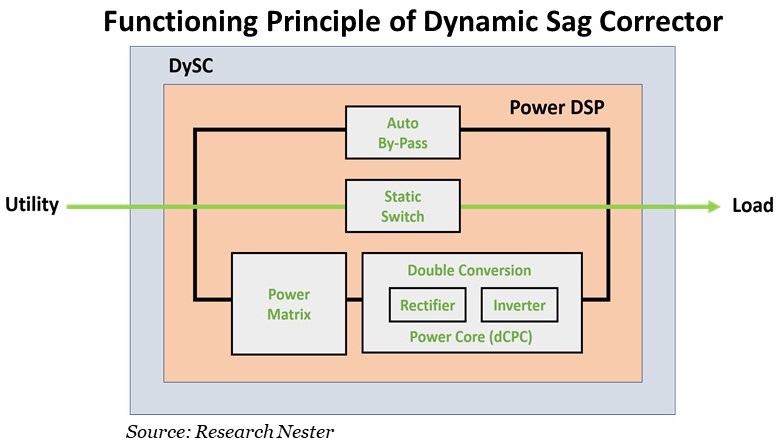 Lack of Awareness Amongst End Users to Hamper the Market Growth

One of the major factors anticipated to hamper the market growth is the lack of awareness for voltage sag correctors amongst the end-users. Lack of proper expertise to identify the issues in the grid power quality, such as brownouts, voltage sags, electrical noise, spikes, harmonics, and others, raises numerous challenges amongst the end-users to select the correct equipment that would help to solve the problem.

Our in-depth analysis of the global sag corrector market includes the following segments:

On the basis of regional analysis, the global sag corrector market is segmented into five major regions including North America, Europe, Asia Pacific, Latin America, and the Middle East & Africa regions. Among the market in these regions, the market in North America is anticipated to hold a significant market share by the end of 2029, on account of the growing need amongst the end-users for enhanced power quality. Alternatively, the market in the Asia Pacific is projected to grow with a significant CAGR during the forecast period, owing to the growing industrialization in the region and the poor electricity quality in several nations.

The global sag corrector market is further classified on the basis of region as follows:

What are the major factors driving the growth of the sag corrector market?

Growing need for quality electrical power, and the concern amongst business organizations for the burden generated due to the increasing average cost of downtime for each voltage sag event, are some of the major factors driving the market growth.

What would be the CAGR of sag corrector market over the forecast period?

What are the challenges affecting the sag corrector market growth?

Lack of awareness for voltage sag correctors amongst the end-users is one of the major factors estimated to act as barriers to the growth of the market.

Who are the major players dominating the sag corrector market?

What are the segments in the sag corrector market?

Which segment under the end-user industry segment is projected to hold the dominating share in the sag corrector market?

The manufacturing segment is projected to hold the largest market share by the end of 2021 owing to the significant dependence of manufacturing industries on electrical energy to power the equipment deployed in the factories.