Ruthenium Tetroxide Market Analysis by Function (Chemical Intermediate, Resisting Agent, Catalyst, and Others); by Application (Electronic Resistors, Metal Alloys, Pharmaceutical, Solar Cells, and Others); and by Type (Over 99% and Below 99%) – Global Supply & Demand Analysis & Opportunity Outlook 2022-2031

Further, the market generated a revenue of USD 1 Billion in the year 2021. The primary growth factor for ruthenium tetroxide market is the increased usage of ruthenium tetroxide-based dyes for dye-sensitized solar cells across the globe. As per a recent estimate, the market share of dye-sensitized solar cells is projected to be approximately 9% of the total solar photovoltaic panels worldwide by 2030. 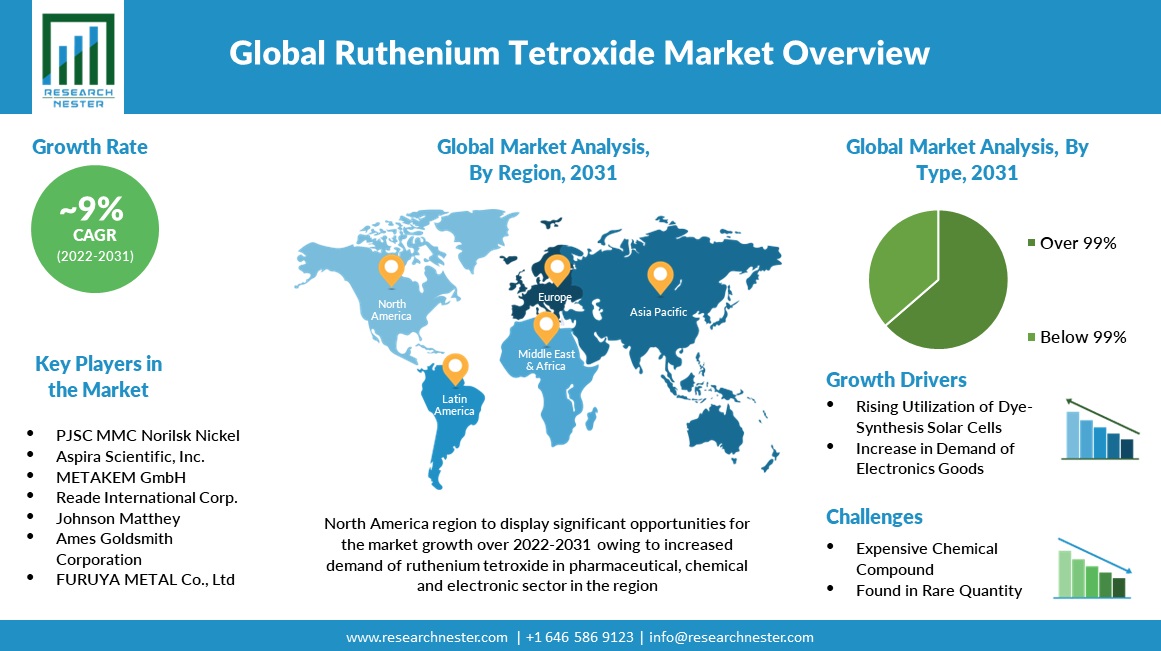 Ruthenium tetroxide is a member of the ruthenium compound family. This inorganic chemical compound is yellow in color and is a volatile solid that melts when kept at room temperature. It is a type of inorganic chemical compound whose physical appearance is yellow. It is soluble in a few solvents and is often generated by using a combination of a catalytic quantity of ruthenium source in organic reactions and an inexpensive re-oxidant to produce ruthenium tetroxide in-situ. Ruthenium tetroxide is used in various sectors such as electronics, pharmaceuticals, chemicals and solar cells, which is anticipated to create growth opportunities for the market in the future. The demand for solar power is expected to increase the demand of ruthenium to manufacture dye-sensitized solar cells in the forecast period. As per recent estimates, the demand for solar photovoltaic power globally rose to 125 gigawatts in 2024.

The global ruthenium tetroxide market is segmented and analyzed for demand and supply by application into electronic resistors, metal alloys, chemical, pharmaceutical, solar cells, and others. Out of these, the chemical segment is estimated to cater the largest revenue by 2031 owing to huge consumption of chemicals across the globe. The recent statistics show that in 2020, global chemical consumption accounted for more than USD 3.0 trillion.

Regionally, the global ruthenium tetroxide market is studied into five major regions including North America, Europe, Asia Pacific, Latin America and Middle East & Africa region. Amongst these, the market in the North America region is projected to hold the largest market share by the end of 2031 on the back of an expansion in the utilization of ruthenium tetroxide in pharmaceuticals and chemical sectors. According to the recent study, the pharmaceutical market of the U.S. accounts for around 46% of the global pharmaceutical market in 2020. Additionally, it is calculated that in 2019, Americans spent across USD 511 billion on medicine, which is further projected to rise to USD 635 billion in 2025. Also, in North America, chemical consumption accounted for 485 billion euros in 2022. Additionally, the value of chemical imports and exports in the region both stood at USD 153 in 2020. 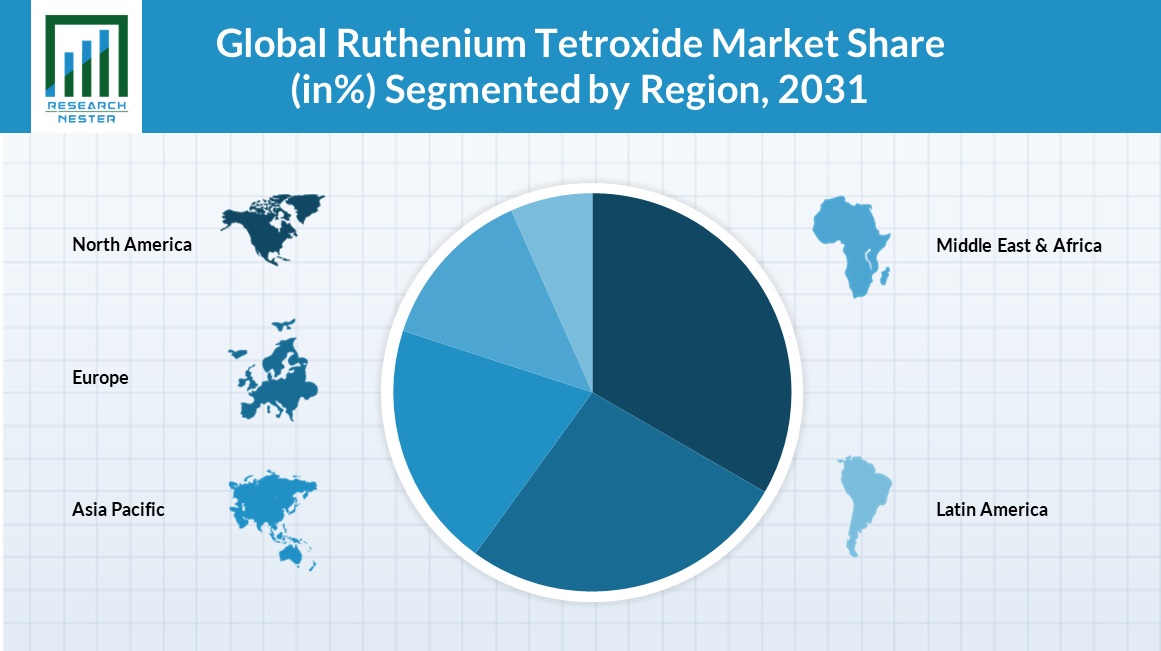 The global ruthenium tetroxide market is further classified on the basis of region as follows:

Our in-depth analysis of the global ruthenium tetroxide market includes the following segments:

What are the major factors driving the growth of the ruthenium tetroxide market?

The increase in demand of electronic goods, rise in pharmaceutical sales, rapid industrialization, and urbanization is estimated to drive the market growth

What would be the CAGR of ruthenium tetroxide market over the forecast period?

What are the challenges affecting the ruthenium tetroxide market growth?

Less availability of the chemical along with the high costs associated with the chemical is expected to hamper the market growth.

Which region will provide more business opportunities for growth of ruthenium tetroxide market in future?

Who are the major players dominating the ruthenium tetroxide market?

What are the segments in the ruthenium tetroxide market?

The market is segmented by function, application, type, and by region.

Which segment captures the largest market size in application in the ruthenium tetroxide market?

The chemical segment is anticipated to garner the largest market size by the end of 2031 and display significant growth opportunities.