The global robotic angiography systems market is estimated to garner a moderate revenue by the end of 2031 by growing at a CAGR of ~6% over the forecast period, i.e., 2022 – 2031. Further, the market generated a modest revenue in the year 2021. The growth of the market can primarily be attributed to the growing concern for the rising incidence of cardiovascular diseases worldwide, which according to the World Health Organization (WHO) registered about 17.9 million deaths in the year 2019, thereby representing 32% of total number of deaths occurred worldwide. 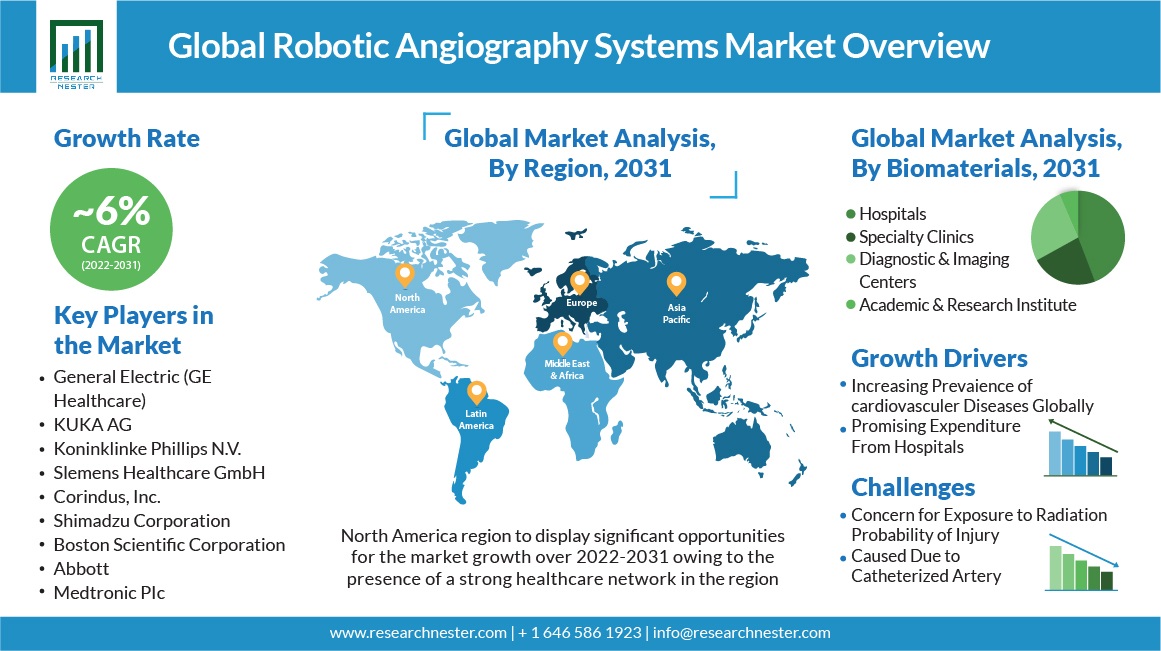 People with the prevalence of a heart disease are prescribed by cardiologists to undergo the process of angiography, which is a type of electromagnetic radiation diagnosis, used to inspect the blood vessels. Once the blood vessels are investigated, and a potential heart condition is detected, the cardiologists then proceed with the process of angioplasty. With the recent advancements in image guided therapy devices as well as medical robotics, the demand for robot-assisted angiography systems is on the rise amongst the healthcare service providers, which in turn, is expected to create massive revenue generation opportunities for the key players operating in the global robotic angiography systems market during the forecast period. According to the statistics by the International Federation of Robotics (IFR), the unit sales of medical robotics touched 18,000 units in the year 2020, up from 7000 units in the year 2019. Further, the statistics also stated that the sales of medical robotics accounted for 55% of the total turnover of professional service robots in the year 2020, mainly driven by the surge in adoption of robotic surgery devices. Moreover, in terms of value, the turnover increased by 11% to reach USD 3.6 Billion in the year 2020. 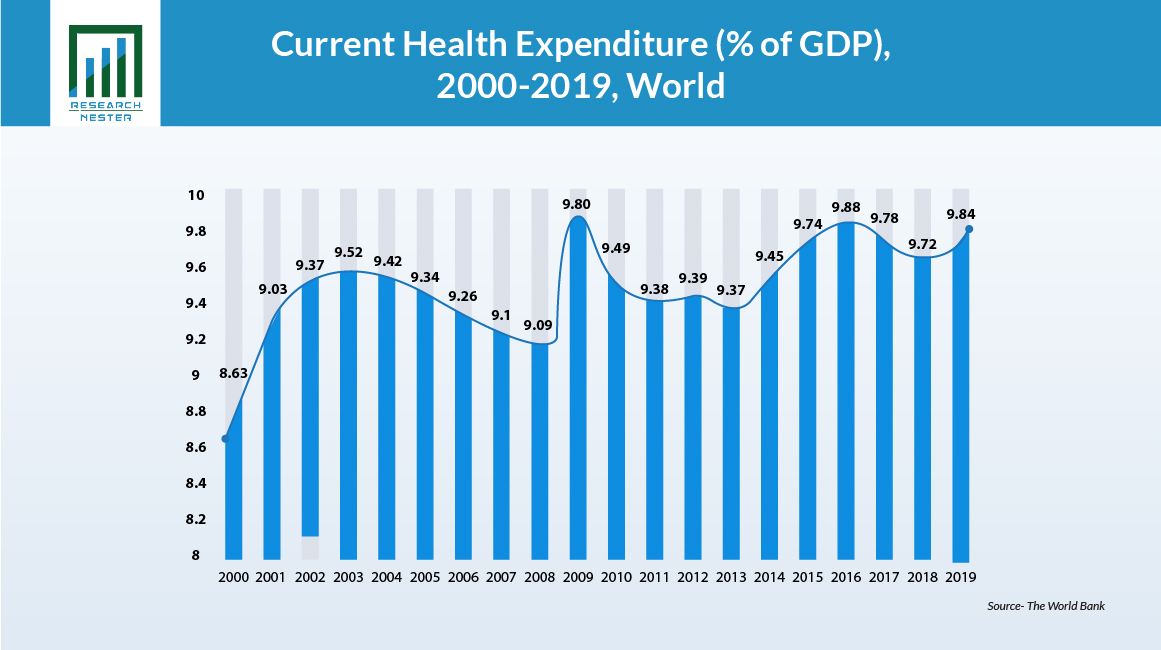 The growth of the global robotic angiography systems market can also be attributed to the numerous opportunities generated as a result of the increasing support from the government of nations to promote research and development for the innovation of novel medical devices. For instance, the Center for Devices and Radiological Health (CDRH), the division of United States Food and Drug Administration (FDA) that facilitates medical device innovation, offers early regulatory assistance with two meeting options as part of the FDA’s Q-Submission Program for the innovators of medical devices. Additionally, to review artificial intelligence (AI) and machine learning (ML) medical devices, the FDA follows an appropriate premarket pathway, such as premarket approval, De Novo classification, and premarket clearance (510(k)) among others. The CDRH also has developed the Partnerships to Advance Innovation and Regulatory Science (PAIRS) mission that aims at making collaborations with industry experts to keep pace with the rapid development of new technology w.r.t. medical devices.

The global robotic angiography systems market is segmented and analyzed for demand and supply by end-user into hospitals, specialty clinics, diagnostic & imaging centers, and academic & research institutes. Amongst these segments, the hospitals segment is anticipated to garner the largest revenue by the end of 2031, backed by the growing number of patient visits along with the surge in the availability of hospitals worldwide. For instance, according to the statistics by the Organization for Economic Co-Operation and Development (OECD), the number of hospitals in the United States, Colombia, Mexico, Korea, and the United Kingdom grew from 5564, 10315, 4457, 3678, and 1882 numbers respectively in the year 2015 to 6146, 10522, 4629, 3924, and 1910 numbers respectively in the year 2018. 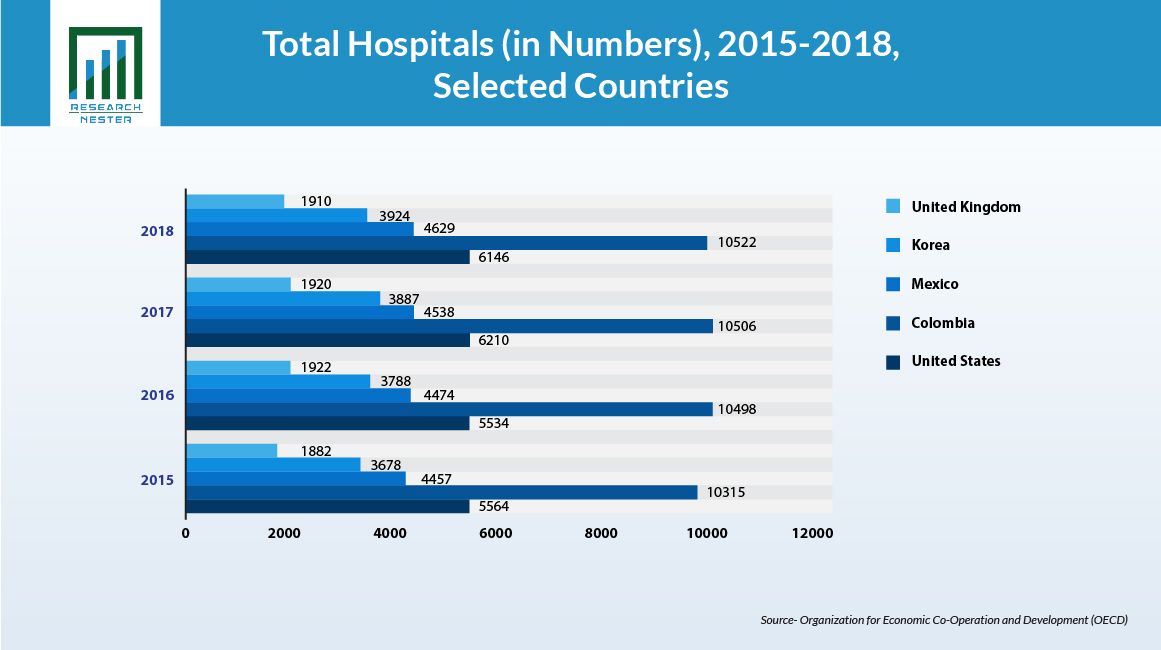 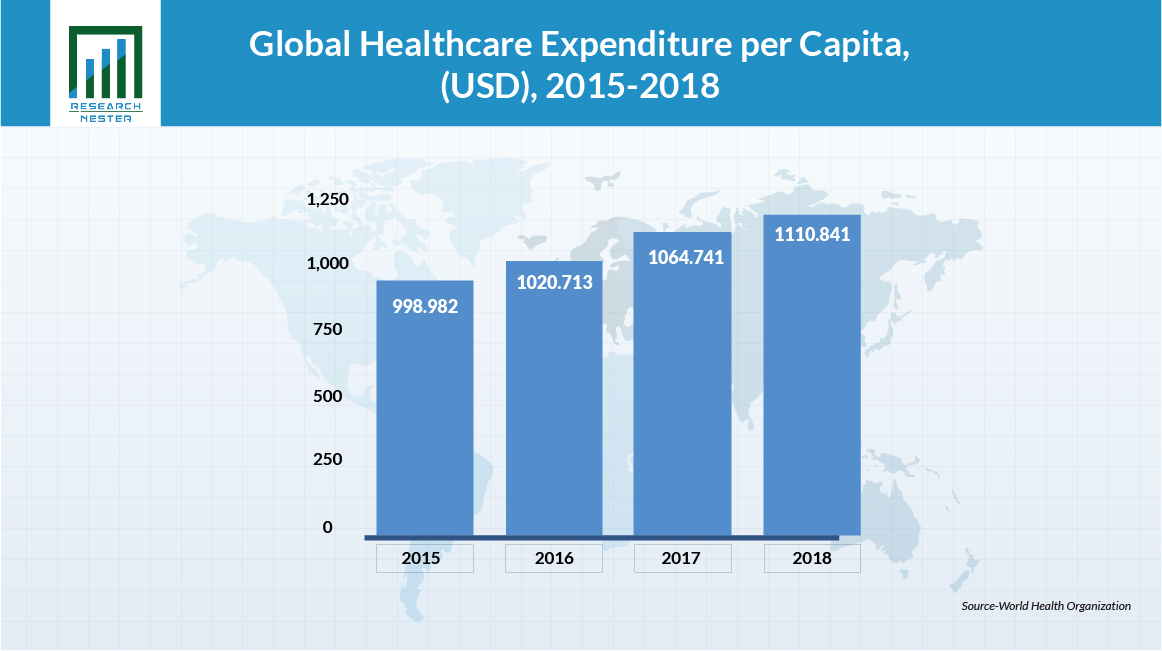 Regionally, the global robotic angiography systems market is studied into five major regions including North America, Europe, Asia Pacific, Latin America and Middle East & Africa region. The market in North America is projected to hold the largest market share by the end of 2031, backed by the presence of a strong healthcare network in the region, growing number of hospitals and diagnostic & imaging centers, as well as the rising awareness amongst the healthcare service providers for advanced robot-assisted minimally invasive diagnostic imaging devices. According to the 22nd edition AHA Hospital Statistics report, published by the American Hospital Association (AHA), the total number of community hospitals in the United States in the year 2021 was 5139, while the total number of admissions in all the hospitals across the nation during the same period was recorded to 33,356,853.

The global robotic angiography systems market is further classified on the basis of region as follows: 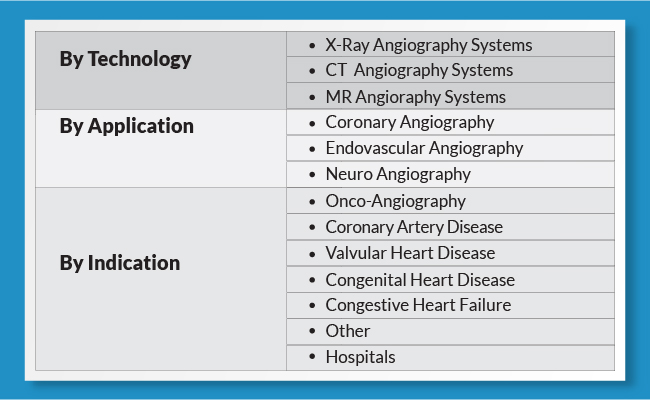 What are the major factors driving the growth of the robotic angiography systems market?

The increasing prevalence of cardiovascular diseases globally, along with the rising trends of internet of medical things (IoMT) are some of the major factors anticipated to drive the growth of the market.

What would be the CAGR of robotic angiography systems market over the forecast period?

What are the challenges affecting the robotic angiography systems market growth?

The concern for exposure to radiation, along with the probability of injury caused due to catheterized artery are some of the factors estimated to hamper the market growth.

Which region will provide more business opportunities for growth of robotic angiography systems market in future?

Who are the major players dominating the robotic angiography systems market?

What are the segments in the robotic angiography systems market?

The market is segmented by technology, application, indication, end-user, and by region.

Which segment captures the largest market size in end-user segment in the robotic angiography systems market?

The hospitals segment is anticipated to garner the largest revenue by the end of 2031 and display significant growth opportunities.