Respiratory disorders are the diseases of the lungs, mainly consisting of ailments such as asthma, chronic obstructive pulmonary disease (COPD), acute respiratory infections, chronic bronchitis and several others. There is an increasing incidence of these disorders being observed all around the world, which is resulting in a higher demand for respiratory drugs. These respiratory illnesses can be caused by a number of factors, some of them consisting of genetics, environment, and occupation as well as ageing. The advancements in the medical industry are resulting in increasing research and development in the area of respiratory drugs. On the back of these factors, the market for respiratory drugs is anticipated to observe a significantly high growth in the next few years.

The market for respiratory drugs is anticipated to grow at a CAGR of 6.0% over the forecast period, i.e., 2019-2027. Further, the market is predicted to attain a significant market value of about USD 25,500 million by the end of 2027.

On the basis of region, the market is segmented into North America, Europe, Asia Pacific, Latin America and Middle East & Africa. The leading market share was held by the respiratory drugs market in North America, with a share of 40% in 2019. The market in this region is further anticipated to continue holding the largest share over the forecast period. This is estimated to be closely followed by the market in Asia Pacific region along with the highest growth rate over the forecast period. This can be attributed to the rising developments and increasing innovations in the healthcare industry in the Asia Pacific region which account for the development of a higher number of respiratory drugs as compared with other regions. Moreover, the rising cases of respiratory disorders in the region are estimated to increase the demand for improved and effective medications in the region.

Based on the type of drug, the market for respiratory drugs is segmented into anti-asthmatics & COPD drugs, cough & cold preparations, pulmonary hypertension drugs and idiopathic pulmonary fibrosis drugs. Out of these, the segment for anti-asthmatics and COPD drugs is predicted to hold the leading share in the market and grow at the highest rate of 5.6% over the forecast period.

On the basis of formulation, the market is segmented into dry powder, tablets & capsules, sprays and syrups & solutions. The segment for dry powder is predicted to lead the market with the market accounting for around USD 7,500 million in 2019, which is predicted to significantly increase in the coming years. 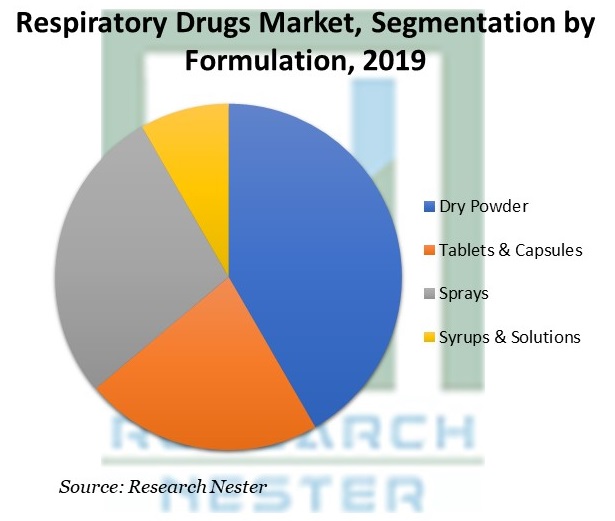 The respiratory drugs market is segmented on the basis of disease into asthma, chronic obstructive pulmonary disease, cystic fibrosis, pulmonary hypertension, allergic rhinitis, idiopathic pulmonary fibrosis and others. The segment for asthma is predicted to attain the largest market value of about USD 8,500 million by the end of 2027 and grow at the highest CAGR over the forecast period. A report by the Centers for Disease Control and Prevention (CDC) stated that 1 among every 13 people is estimated to suffer from asthma and adult women are more prone to this condition as compared to adult men. This is attributed to result in the growth of this segment.

The market is segmented on the basis of drug delivery into nasal, oral and injection. Out of these, the segment for nasal drugs is predicted to hold the leading share in the market over the next few years and is estimated to further witness the highest growth rate with a CAGR of 5% during the forecast period.

As per the data recorded by the United Nations, the total number of people aged 65 and above in the world was calculated to be 703 million in the year 2019. Moreover, this number was estimated to increase to 1.5 billion by the end of 2050. In addition to this, the report stated that the share of population aged 65 and above accounted for 6% in 1990 and increased to 9% in 2019.

This increase in geriatric population is predicted to be responsible for the rising cases of diseases such as the respiratory disorders. This is one of the major growth factors anticipated to drive the growth of respiratory drugs market in the coming years. Some other factors responsible for the market growth include advancements in technology in the industry resulting in development of improved drugs, rising cases of lung disorders as a result of increased smoking among a large majority of the population as well as unhealthy lifestyles of the population globally.

The strict regulatory laws that are associated with the approval of respiratory drugs are estimated to become major growth restricting factors for the respiratory drugs market. Moreover, the drug development procedure is highly time-consuming which is predicted to become another barrier for the market growth.

What are the major factors driving the growth of the Respiratory Drugs market?

What would be the CAGR of Respiratory Drugs market over the forecast period?

Which region will provide more business opportunities for growth of Respiratory Drugs market in future?

Asia Pacific will provide more business opportunities on account of rising elderly population and increasing demand for respiratory drugs in the region.

Who are the major players dominating the Respiratory Drugs market?