The global renewable solvent market is estimated to garner a revenue of ~USD 7 billion by the end of 2031 by growing at a CAGR of ~5% over the forecast period, i.e., 2022 – 2031. Further, the market generated a revenue of ~USD 4 billion in the year 2021. The benefits of renewable solvents over traditional solvents like less toxicity, biodegradable in nature and lesser emission of Volatile Organic Compounds (VOC) is estimated to be the primary growth factor for the renewable solvent market in the forecast period. As per recent estimates, the United States emitted approximately 11,880 tons of VOC in 2021 – a considerable decrease from 2018 with 12,930 tons. Such a decrease in VOC emission is expected to prompt the market size of renewable solvent. 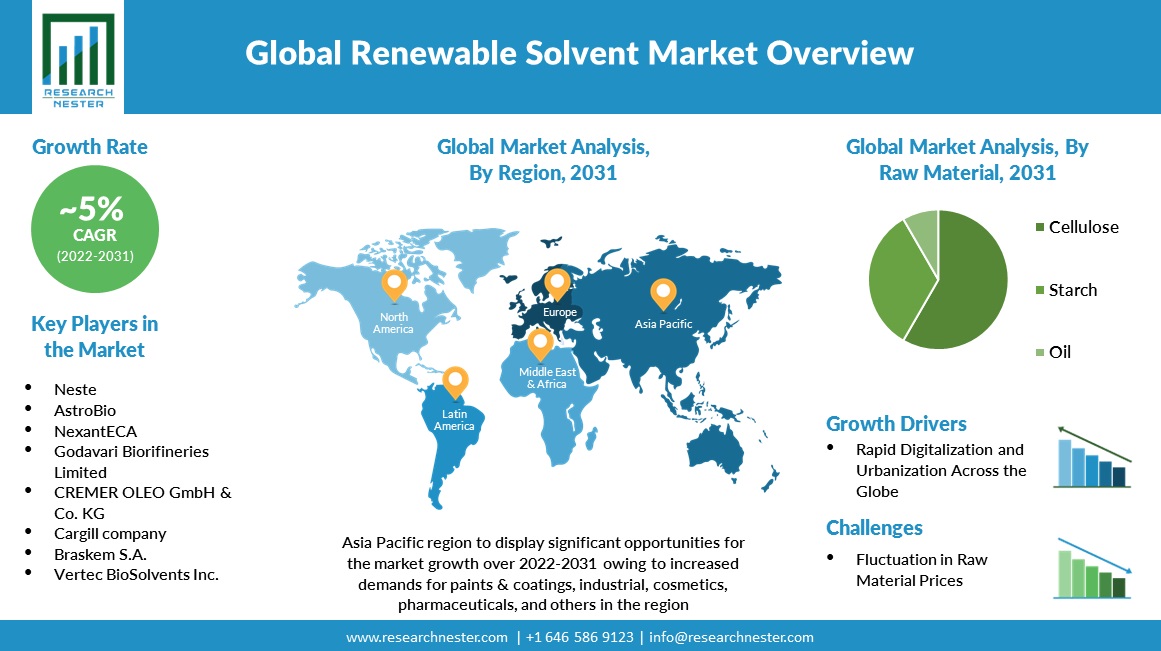 The renewable solvents market is segmented and analyzed for demand and supply by application into paints & coatings, pharmaceuticals, adhesives, home & personal care, industrial cleaning, plastics & polymers, agrochemicals, food & beverage, and others. Out of these, the paints & coatings segment is anticipated to garner the highest revenue by 2031. The growth of the segment can be attributed to the growing demand for renewable solvent solutions for the construction and automotive industries. Further, with the increased housing construction, backed by a growing population, and income levels in countries like Brazil, China, India, and Mexico, the demand for paints & coatings is anticipated to grow significantly. As per the World Bank, the population and GDP of China was 1.4 billion and USD 13.89 trillion respectively. This figure rose to 1.41 billion population and USD 17.73 trillion GDP in 2021.

Regionally, the global renewable solvent market is studied into five major regions including North America, Europe, Asia Pacific, Latin America and Middle East & Africa region. Amongst these, the market in Asia Pacific is projected to hold the largest market share by the end of 2031. This is attributed to an increase in construction in the region which is further expected to drive the rise in demand for renewable solvents for its advantages. It is estimated that Asia-Pacific is projected to account for USD 7.4 trillion of global construction output by 2030. Furthermore, the rise in pharmaceutical spending in Asia-Pacific countries such as Japan and Korea is anticipated to drive for the expansion of the renewable solvent market size. As per Organization for Economic Co-operation and Development, the pharmaceutical spending in Japan held 2.27% of GDP in 2019 whereas, in Korea it was 1.63% of GDP in 2021. 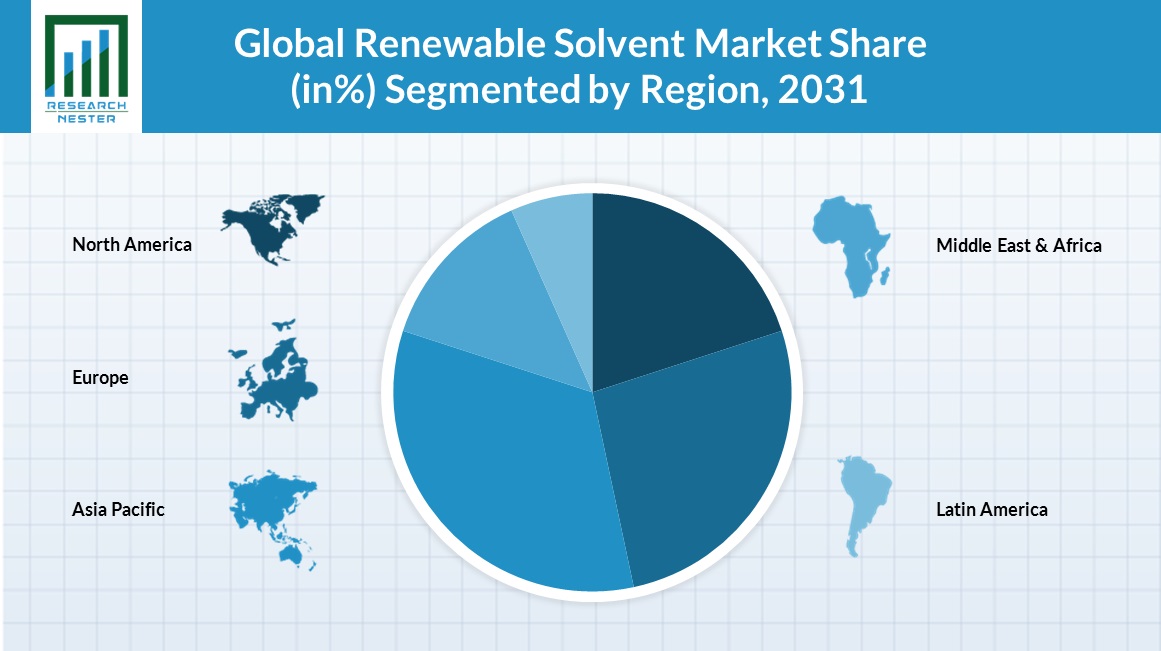 The global renewable solvent market is further classified on the basis of region as follows:

Our in-depth analysis of the global renewable solvent market includes the following segments:

What are the major factors driving the growth of the renewable solvent market?

The increased awareness about environmental hazards along with the expansion of automotive industry and rapid industrialization and urbanization is expected for market growth.

What would be the CAGR of renewable solvent market over the forecast period?

What are the challenges affecting the renewable solvent market growth?

Fluctuation in raw material prices and complex production process are expected to hamper the market growth.

Which region will provide more business opportunities for growth of renewable solvent market in future?

Who are the major players dominating the renewable solvent market?

What are the segments in the renewable solvent market?

The market is segmented by type, raw material, application, and by region.

Which segment captures the largest market size in application in the renewable solvent market?

The paint & adhesives segment is anticipated to garner the largest market size by the end of 2031 and display significant growth opportunities.