The global pulmonary embolism drugs market is estimated to grow at a robust CAGR over the forecast period, i.e., 2022 – 2030. The growth of the market can be attributed to the increasing prevalence of pulmonary embolism. This is a condition, where a blood clot occurs in the lungs, which often is formed in other body parts and moves to the lungs through bloodstream. This limits the flow of blood to the lungs, which reduces the flow of oxygen in the body, and increases blood pressure. Pulmonary embolism drugs are used to dissolve the clots or inhibit their formation. Patients undergoing chemotherapy, or people with family history of this disease are at most risk, which is estimated to boost the demand for the drugs. Increasing patient pool of cancer is estimated to fuel the growth of the market. According to the World Health Organization, cancer caused nearly 10 million deaths in 2020. Moreover, increasing government investment to improve the public healthcare system in developing and developed countries, is further anticipated to boost the market growth. 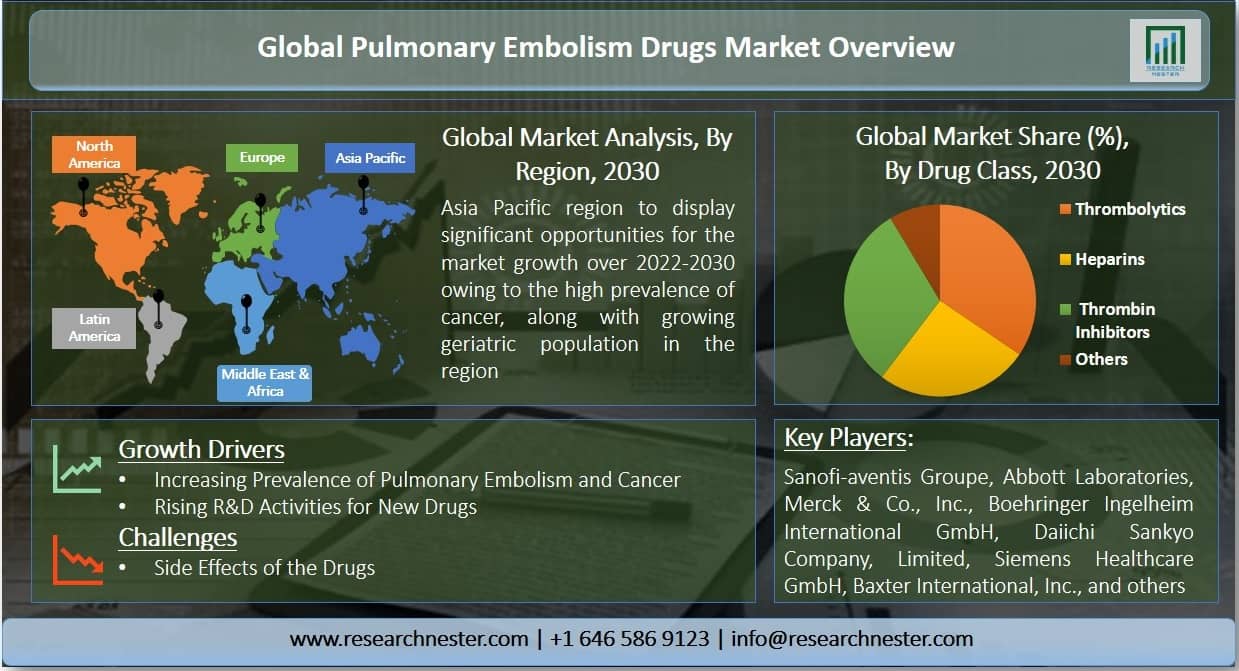 The market is segmented by drug class into thrombolytics, heparins, thrombin inhibitors, and others out of which, the heparins segment is anticipated to hold the largest share in the global pulmonary embolism drugs market over the forecast period owing to the anticoagulant properties of heparins, that are used to dissolve the blood clot. On the basis of distribution channel, the hospital pharmacies segment is anticipated to garner the highest market revenue over the forecast period, owing to the easy accessibility of drugs to the patients admitted in hospitals.

On the basis of geographical analysis, the global pulmonary embolism drugs market is segmented into five major regions including North America, Europe, Asia Pacific, Latin America and Middle East & Africa region. The market in North America region is estimated to witness noteworthy growth over the forecast period on the back of high healthcare expenditure in the region. According to a report by the World Health Organization (WHO), as of 2018, the per capita healthcare expenditure of North America valued USD 10,050.279. Moreover, presence of major pharmaceutical companies in the region is estimated to boost the market growth.

The market in the Asia Pacific region is estimated to gain significant share in the market over the forecast period, owing to the high prevalence of cancer in the region, along with high geriatric population, both of which are a major cause for pulmonary embolism. 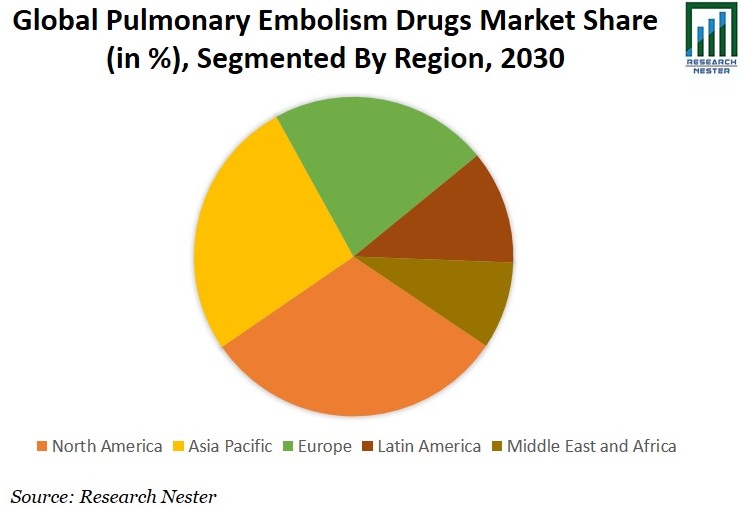 The global pulmonary embolism drugs market is further classified on the basis of region as follows:

1) What are the major factors driving the growth of the pulmonary embolism drugs market?

Ans: Increasing prevalence of pulmonary embolism and deadly nature of this disease are estimated to boost the market growth.

2) What would be the CAGR of pulmonary embolism drugs market over the forecast period?

3) What are the challenges affecting the pulmonary embolism drugs market growth?

Ans: Side effects of the drugs are estimated to hamper the market growth.

4) Which region will provide more business opportunities for growth of pulmonary embolism drugs market in future?

Ans: the market in the North America region is estimated to provide most growth opportunities over the forecast period, owing to the presence of major pharmaceutical companies in the region.

5) Who are the major players dominating the pulmonary embolism drugs market?

7) What are the segments in the pulmonary embolism drugs market?

Ans: The market is segmented by drug class, distribution channel, and by region.

8) Which sub-segment captures the largest market size in the drug class segment in the pulmonary embolism drugs market?

Ans: The heparins segment is anticipated to hold largest market size over the forecast period and display significant growth opportunities.