The global prosthesis equipment market is estimated to garner a significant revenue by growing at a CAGR of ~4.5% over the forecast period, i.e., 2022–2030. The growth of the market can be attributed to the increasing incidences of severe limb injury that may require amputation. Such injuries are very common in road accidents, sports mis happenings, and due to diseases, such as, diabetes. Moreover, various kind of cancers, such as, osteosarcoma, may require limb amputation. This is estimated to boost the market growth. As per the National Health Statistics Reports, every year, on an average, 8.6 sports-related injuries occur, out of which 64.9% injuries occur among individuals aged 5-24 years of age. Furthermore, the increasing research and development, along with increasing investment in prosthetics is estimated to boost the market growth. In fact, occupation in orthotists and prosthetists is growing massively. According to the Bureau of Labor Statistics, employment of orthotists and prosthetists will grow 17% from 2019 to 2029, which is expected to positively impact the market growth. 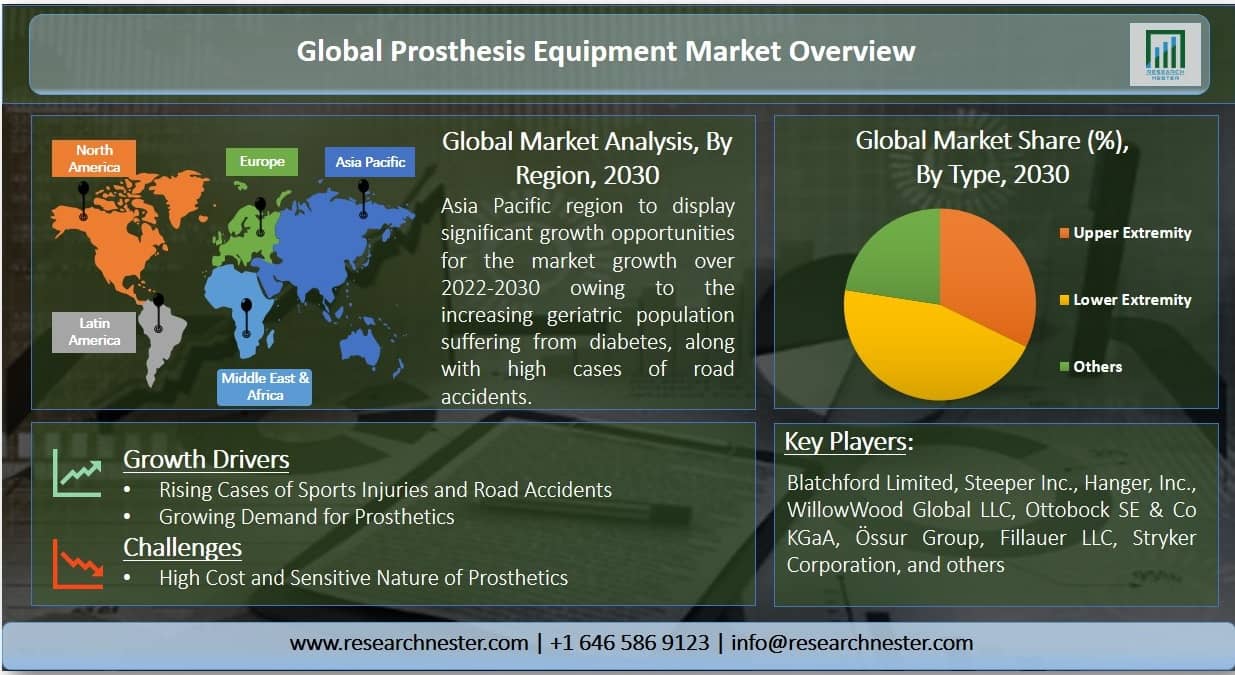 The global prosthesis equipment market is segmented by type into upper extremity, lower extremity, and others, out of which, the lower extremity segment is anticipated to hold the largest revenue share in the market during the forecast period on account of higher cases of injuries in limbs, as compared to head and other parts. Moreover, limb amputation is common among geriatric patients of diabetes. Rising cases of diabetes is also expected to boost the growth of the segment.

Regionally, the global prosthesis equipment market is segmented into five major regions including North America, Europe, Asia Pacific, Latin America and Middle East & Africa region. The market in North America region is estimated to garner largest share over the forecast period on the back of advancement in medical technology, and higher success rate of prosthetic surgeries. Moreover, increasing cases of cancer, diabetes and other diseases is estimated to boost the market growth.

The market in the Asia Pacific region is estimated to witness highest CAGR over the forecast period, owing to the increasing geriatric population, suffering from diabetes in the region. In Asia, over 60% of the population is currently suffering from diabetes. Moreover, rising cases of road accidents, that can lead to disability, is estimated to boost the market growth in the region. According to the report by the WHO, middle-income countries have 19.2 road traffic fatalities per 100, 000 population, which is higher than high-income countries. 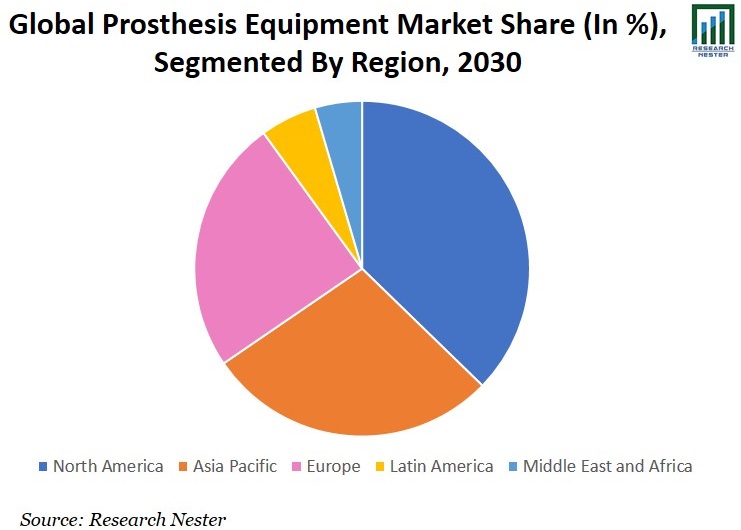 The global prosthesis equipment market is further classified on the basis of region as follows:

Our in-depth analysis of the global prosthesis equipment market includes the following segments:

By Attachment to Body

What are the major factors driving the growth of the prosthesis equipment market?

Increasing prevalence of diabetes and cancer, road accidents, and sports injuries is a major factor driving the market growth.

What would be the CAGR of prosthesis equipment market over the forecast period?

What are the challenges affecting the prosthesis equipment market growth?

Requirement of maintenance of prosthesis is one of the factors estimated to hamper the market growth.

Which region will provide more business opportunities for growth of prosthesis equipment market in future?

The market in Asia Pacific is estimated to provide most growth opportunities owing to the high cases of road accidents, along with rising prevalence of diabetes.

Who are the major players dominating the prosthesis equipment market?

What are the segments in the global prosthesis equipment market?

The market is segmented by type, technology, attachment to body, and by region.

Which sub-segment captures the largest market size in type segment in the Prosthesis equipment market?

The lower extremity segment is anticipated to hold largest market share over the forecast period owing to the higher share of injuries and amputation of limbs.