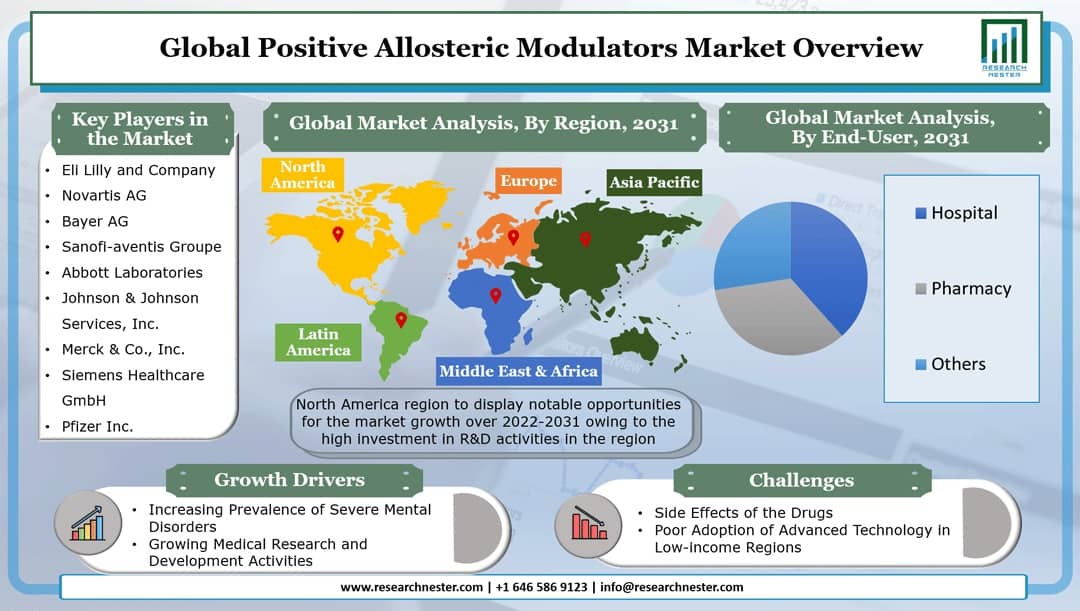 The market is segmented by disease type into Parkinson’s disease, schizophrenia, Alzheimer’s disease, and others out of which, the Alzheimer’s disease segment is anticipated to hold a substantial share in the global positive allosteric modulators market over the forecast period on account of high prevalence of the disorder across the globe. Meanwhile, the Parkinson’s disease segment is also estimated to hold a notable size in the market during the forecast period, owing to the ongoing growth in the cases of the disease. According to the statistics by the Parkinson’s Foundation, more than 10 million people are living with this disorder globally. CLICK TO DOWNLOAD SAMPLE REPORT

On the basis of geographical analysis, the global positive allosteric modulators market is segmented into five major regions including North America, Europe, Asia Pacific, Latin America and Middle East & Africa region. The market in Asia Pacific region is estimated to witness modest growth over the forecast period on the back of the increasing investment in development of healthcare sector in the region, along with growing health awareness amongst the population.

The market in the North America region is anticipated to gain the largest market share throughout the forecast period on account of the higher health awareness amongst the population, along with easy access of quality healthcare in the developed nations, such as, the United States. Moreover, the higher investment in the R&D activities in the region is further expected to boost the market growth. As per the World Bank data, 2.734% of GDP of North America was spend for R&D activities in 2018. 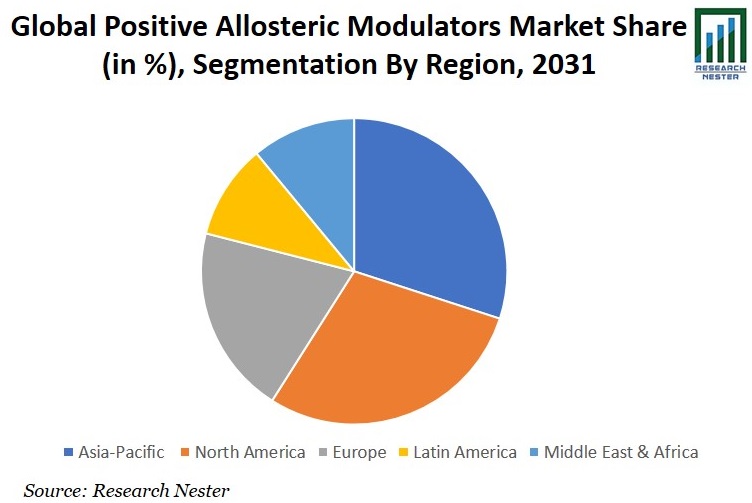 The global positive allosteric modulators market is further classified on the basis of region as follows:

What are the major factors driving the growth of the positive allosteric modulators market?

The increasing prevalence of Parkinson’s disease, schizophrenia, Alzheimer’s disease, and other mental disorder is estimated to boost the market growth.

What would be the CAGR of positive allosteric modulators market over the forecast period?

What are the challenges affecting the positive allosteric modulators market growth?

Poor adoption of advanced technology in low-income regions, along with side effects associated with the drugs are estimated to hamper the market growth.

Which region will provide more business opportunities for growth of positive allosteric modulators market in future?

The North America region is anticipated to provide more business opportunities over the forecast period owing to the high investment in R&D activities in the region.

Who are the major players dominating the positive allosteric modulators market?

What are the segments in the positive allosteric modulators market?

The market is segmented by disease type, drug type, end-user, and by region.

The Alzheimer’s disease segment is anticipated to hold largest market size over the forecast period and display significant growth opportunities.