A portable travel bidet is basically like a water bottle that is tightly packed with a nozzle on top which is provided for the purpose of cleaning the bottom of the user, by spraying water on it. It is refillable and can easily fit into a bag or suitcase of any individual. It cleans the anus or genitals of the user in a gentle way without providing any discomfort to the user and helps to ensure the upkeep of personal hygiene of the user. Apart from that, it helps to prevent infection or other dangerous health issues caused by lack of proper hygiene related to the private areas of an individual.

The portable bidets for Travelers market is estimated to register a modest CAGR over the forecast period, i.e., 2020-2027. The growth of this market is primarily driven by its offer of convenience to the users, as this device can be used without any hassles while travelling including its ability to offer hygiene benefits and ensuring uncompromising cleanliness and safety wherever the users stay during their trips as it is designed in such a way that it provides ease of use among the users. Moreover, it involves only a gentle squeeze and for those individuals who are old or who might have undergone surgeries or those struggling with mobility issues, this could prove to be handy and ease them off their struggle.

The market is segmented by product type into electric and manual, by capacity into 100 - 200 ml, 200 - 400 ml and > 400 ml and by distribution channel into online and offline segments. Among the distribution channel, the online segment is predicted to hold highest shares in the portable bidet market, owing to variety of options available online for the consumers that may suit their requirements. 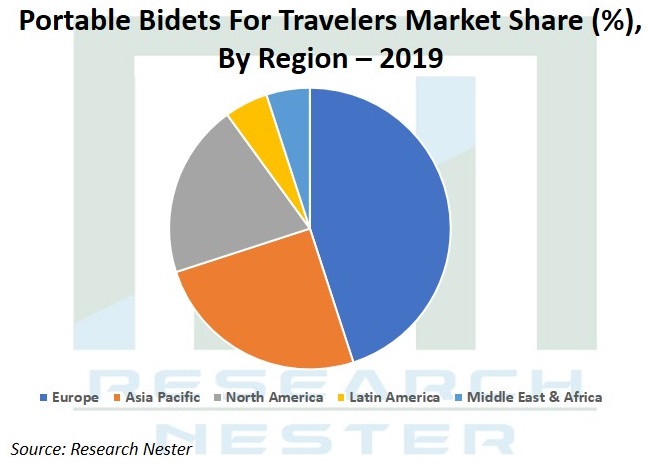 A steady increase in the number of Travelers and tourists, who have started considering the option of preferring a portable bidet as compared to toilet paper that is considered to be expensive is significantly driving the demand for portable bidets among large number of travelers. Moreover, these portable bidets are also refillable and considered to be clean and hygienic including the fact that they are simple to use and can be carried along easily while traveling anywhere. These are some of the notable factors that are driving the growth of the market.

Growing Ecological Concerns to Drive the Demand for Portable Bidets

Rising ecological concerns and growing preference of individuals, especially in Europe and Asia Pacific towards portable bidets in order to reduce the consumption of toilet paper is paving a way for adoption of portable bidets. According to World Wide Fund For Nature, at least 2,70,000 trees are being flushed or dumped in landfills everyday all over the world, out of which, 10% is toilet paper alone.

Additionally, with a growing number of individuals receiving formal education in one way or the other in almost all nations, the significance of adopting cleanliness and hygiene has played an important role in their buying decisions. Increasing preferences among individuals to reduce the use of toilet paper, the rapid growth in the number of Travelers and tourists who are likely to adopt such bidets instead of preferring toilet papers for cleaning along with the priority and focus shifted towards cleanliness and hygiene among younger population, owing to their education and awareness about the ill effects of not maintaining hygiene and cleanliness is anticipated to play a major role in driving the demand for portable bidets, thereby contributing to the growth of the market.

Some of the factors such as lack of awareness among the general population in developing countries pertaining to the usage and benefits of portable bidets combined with a general perception that using bidets might be unsafe or are only available for women especially among the population in North America may act as a major barrier to  the growth of the market.

On the basis of regional analysis, the portable bidets market is segmented into five major regions including North America, Europe, Asia Pacific, Latin America and Middle East & Africa region. The market in Europe and Asia Pacific is anticipated to attain highest market share, owing to the growing presence of manufacturers of portable bidets working innovatively towards adding new features to their products and making these products available to the population while adhering to their needs. Moreover, portable bidets are affordable, which is one of the additional factor that is estimated to drive the growth of the market in upcoming years.

The portable bidets for Travelers market is further classified on the basis of region as follows: