·    August, 2021: Arkema announced the acquisition of Ashland Performance Adhesives, a leader in high performance adhesives for industrial applications, to boost its portfolio in the United States adhesive and sealant market. 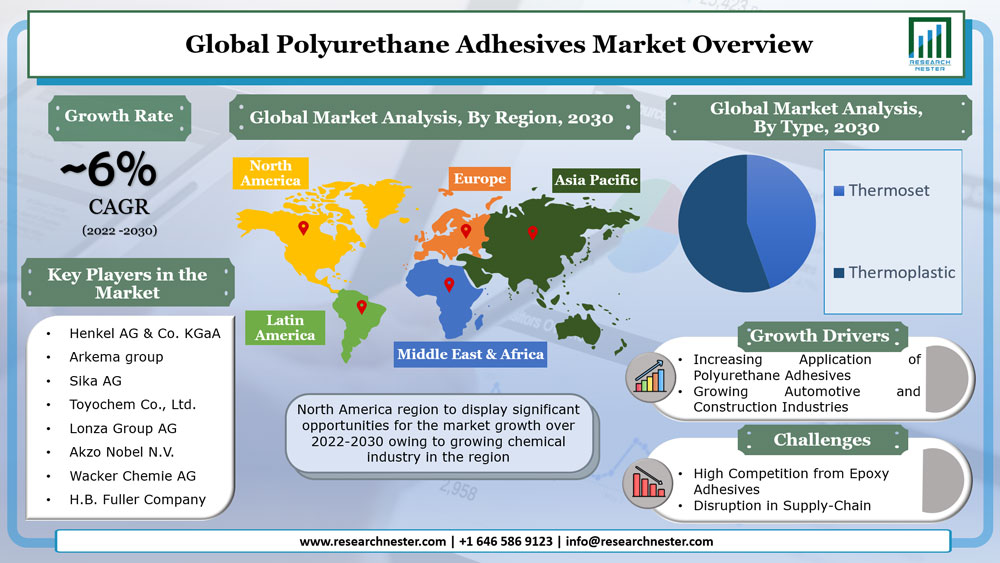 The market is bifurcated by type into thermoset and thermoplastics, out of which, the thermoplastics segment is anticipated to hold the largest share in the global polyurethane adhesives market over the forecast period owing to the ability to melt the adhesive in order to form a bond, which increases the range of application of the adhesive. Moreover, thermoplastic polyurethane adhesives or TPU acts as a bridge between rubber and plastics, as it is smooth, flexible, and durable. Such beneficial features of TPU are estimated to boost the segment growth. CLICK TO DOWNLOAD SAMPLE REPORT

On the basis of geographical analysis, the global polyurethane adhesives market is segmented into five major regions including North America, Europe, Asia Pacific, Latin America and Middle East & Africa region. The market in the Asia Pacific region is estimated to witness noteworthy growth over the forecast period on the back of increasing demand for adhesive amongst the growing construction, and furniture industries, in the region. Besides this, the growth in the automotive manufacturing industry, in countries, such as, China, Japan, India, and Malaysia, is also estimated to boost the market growth.

The market in the North America region is anticipated to gain the largest market share throughout the forecast period on the back of presence of major automotive manufacturers in the developed countries, along with growth in the construction sector. According to the data by Organization Internationale des Constructeurs d'Automobiles (OICA), also known as, International Organization of Motor Vehicle Manufacturers, 3,033,216 cars and 8,156,769 commercial vehicles were manufactured in the U.S. in 2017. 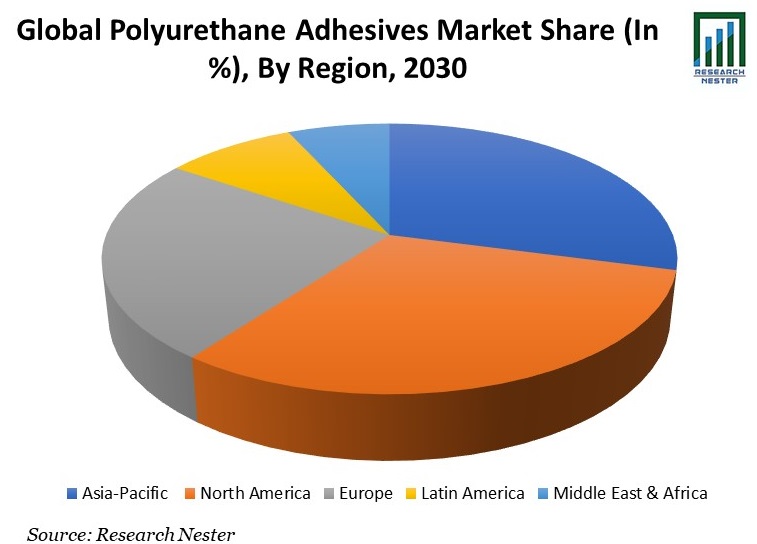 The global polyurethane adhesives market is further classified on the basis of region as follows:

Our in-depth analysis of the global polyurethane adhesives market includes the following segments:

What are the major factors driving the growth of the polyurethane adhesives market?

The growing application of synthetic adhesives in the construction, automotive, and furniture industry, is estimated to boost the market growth.

What would be the CAGR of polyurethane adhesives market over the forecast period?

What are the challenges affecting the polyurethane adhesives market growth?

High competition from epoxy adhesives is estimated to hamper the market growth.

Which region will provide more business opportunities for growth of polyurethane adhesives market in future?

The market in the Asia Pacific region will provide more business opportunities over the forecast period, owing to the growing chemical industry in the region.

Who are the major players dominating the polyurethane adhesives market?

What are the segments in the polyurethane adhesives market?

The market is segmented by technology, type, application, and by region.

Which segment captures the largest market size in application segment in the polyurethane adhesives market?

The furniture segment is anticipated to hold largest market size over the forecast period and display significant growth opportunities.