The global plastic market is estimated to garner a revenue of ~ USD 800 Billion by the end of 2033 by growing at a CAGR of ~4% over the forecast period, i.e., 2023 – 2033. Further, the market generated a revenue of ~ USD 600 Billion in the year 2022. The primary growth factor of the plastic market is the expansion of plastic industry. The recent reports suggest that the total value of the United States plastic shipments was around USD 400 billion in 2020.

Due to its adaptability, ease of production, dimensional stability, easy fabrication, impervious properties, and cost - effectiveness, the demand of plastics are expected to increase considerably in the upcoming years. Moreover, the rising activities in the infrastructure, automobiles manufacturing, and consumer electronics sectors are anticipated to raise the utilization rate of plastics which in turn, is projected to expand the market size in the forecast period. As of 2019, it was estimated that in the United States, almost 40 million tons of plastic are used every year.

The plastic market is segmented and analyzed for demand and supply by end-user into packaging, construction, electrical & electronics, automotive, medical devices, furniture & bedding, consumer goods, and others. Out of these the automotive segment is expected to garner the highest market share by 2033, owing to the high demand and production of vehicles by the burgeoning population. Organization of Motor Vehicle Manufacturers, the global production of vehicles was 80,145,988 units in 2021. This is a rise from 77,711,725 units in 2020.

Regionally, the global plastic market is studied into five major regions including North America, Europe, Asia Pacific, Latin America and Middle East & Africa region. Amongst these markets, the market in Asia Pacific is projected to hold the largest market share by the end of 2033, owing to huge facilities producing automobiles. Also, the increased demand and production of automobiles in the region is expected to increase the sales of plastic in the forecast period. As per International Organization of Motor Vehicles, the total production of vehicles in the region was 46,732,785 units in 2021, a rise from 44,276,549 units in 2020. Similarly, the total sales in the region was 42,663,736 units in 2021, a rise from 40,322,544 in 2020.  Also, the high consumption of chemicals is an another growth driver of the plastic market in the forecast period. As of 2020, the chemical industry of Asia Pacific region contributed to at least 60% of the revenues generated by global chemical industry. 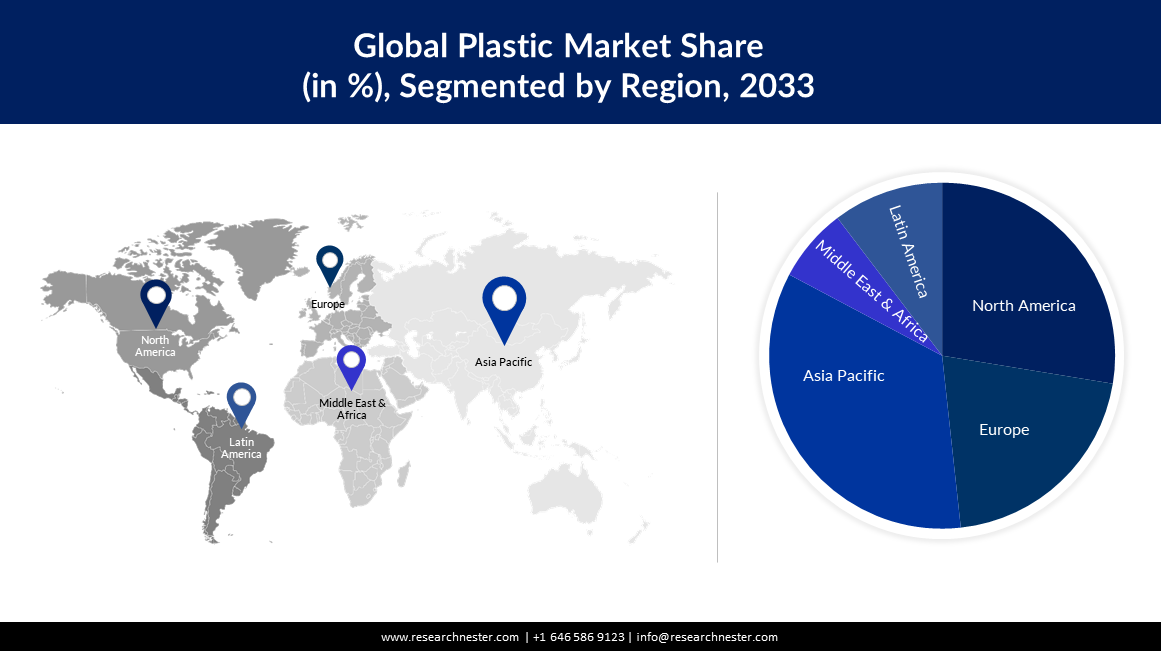 The global plastic market is further classified on the basis of region as follows:

Our in-depth analysis of the global plastic market includes the following segments:

What are the major factors driving the growth of the plastic market?

The increasing demand of plastic and plastic products is expected to fuel the market growth in the forecast period.

What would be the CAGR of plastic market over the forecast period?

What are the challenges affecting the plastic market growth?

The rising awareness of plastic waste along with the possibility of adverse effect on health and environment and stringent rules by government to protect the environment is expected to hamper the market growth.

Which region will provide more business opportunities for growth of plastic market in future?

Who are the major players dominating the plastic market?

What are the segments in the plastic market?

The market is segmented by product, application, end-use, and by region.

Which segment captures the largest market size in end-use in the plastic market?

The automotive segment is anticipated to garner the largest market size by the end of 2033 and display significant growth opportunities.