The global perineural therapy market is estimated to garner significant revenue by the end of 2031, by growing at a CAGR of ~6% over the forecast period, i.e., 2022 – 2031. Further, the market generated remarkable revenue in the year 2021. The increasing prevalence of different neural disorders is anticipated to propel the growth of the market during the forecast period. As per the data provided by Pan American Health Organization (PAHO), in the U.S., 533,172 individuals lost their lives due to neurological conditions, out of which, 213,129 were men and 320,043 were women in 2019. 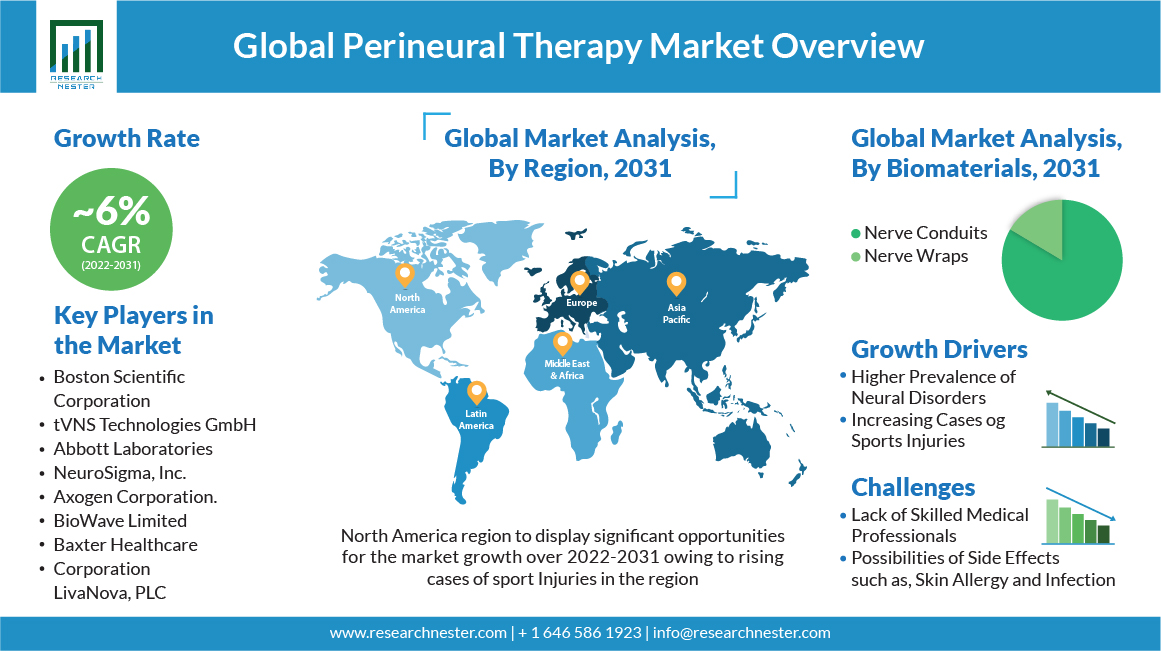 The global perineural therapy market is further estimated to witness growth on the back of the increment in approval and launch of more enhanced drugs and other products to repair and regenerate nerves. In a study conducted by the National Library of Medicine in 2020, it was observed that around 82% meaningful recovery (MR) was obtained from mixed, sensory, and motor nerve repair having almost 70 mm gaps. There were no significant differences in MR across the nerve type, age, time‐to‐repair, and smoking status, however, significant differences were noted by the injury type. complex injures had 74% MR as compared to lacerations 85%, and neuroma resections at 94% recovery.

It was observed that around 10% of the global population is affected by chronic pain summing up to approximately 60 million people. Moreover, about one in every 10 people additionally develop chronic pain every year worldwide.

Rising digitalization and technological advancement have brought a major change in the physical health of the modern population. People tend to spend more time sitting in either workplaces or educational institutions and do not indulge in physical activities. Such conditions become accountable to trigger chronic pain and other diseases, which require perineural therapy.

Sport injuries are a major cause of neural diseases, which require perineural therapy. Data provided by the National Safety Council stated that bicycling is one of the major causes of sports injuries. The prevalence has increased by 44% in the last decade and 1,260 deaths were noticed in 2020 due to bicycle incidents.

According to the data by the World Bank 747.238 million individuals were aged 65 or above in 2021 across the globe. Older adults are more prone to neural disorders and would require immediate treatment.

The growing development and launch of medical technologies and drugs, such as, neurostimulator devices, is estimated to boost the market growth. The modern perineural injection has been launched in the market with 85% of effectiveness.

The perineural therapy market is segmented and analyzed for demand and supply by biomaterials into nerve conduits and nerve wraps, out of which, the nerve conduits segment is set to witness noteworthy growth over the forecast period. The growth of the segment can be ascribed to rising cases of nerve damage on account of multiple causes, such as sports injuries and changing lifestyles. For instance, it has been estimated that over 100 types of nerve damage exit that require significant medical attention.

Regionally, the global perineural therapy market is studied into five major regions including North America, Europe, Asia Pacific, Latin America, and the Middle East & Africa region. Amongst these markets, the market in the North America region is projected to hold the largest market share by the end of 2031. The market is projected to witness remarkable growth on the back of a higher prevalence of sports injuries. Approximately 30 million teens participate in organized sports, out of which, around 3.5 million of them get injured annually. Hence, the market is expected to grow exponentially in the region over the forecast period.

Furthermore, the Asia Pacific region is estimated to be the second-largest shareholder in the global perineural therapy market. The growth of the market in the region can be attributed to the skyrocketing cases of Alzheimer’s diseases, dementia, and other chronic disorders. For instance, the number of people with dementia is projected to reach around 70 million by the year 2050 in the Asia Pacific region. Additionally, the rising geriatric population with severed nerves is further estimated to drive the growth of the market over the forecast period. As per the data provided by the Asian Development Bank, the number of the elderly population in Asia Pacific is stated to reach around 923 million by the year 2050. Thereby, all these factors are expected to hike the growth of the market during the forecast period.

The global perineural therapy market is further classified on the basis of region as follows:

Our in-depth analysis of the global perineural therapy market includes the following segments:

What are the major factors driving the growth of the perineural therapy market?

Higher prevalence of different sorts of neural disorders and increment in approval of more enhanced products to repair and regenerate nerves are the major factors driving the growth of the perineural therapy market.

What would be the CAGR of perineural therapy market over the forecast period?

Who are the major players dominating the perineural therapy market?

What are the segments in the perineural therapy market?

Which segment captures the largest market size in the biomaterials segment in the perineural therapy market?

The nerve conduits sub-segment is anticipated to garner the largest market size by the end of 2031 and display significant growth opportunities.

Lack of skilled medical professionals, possibilities of side effects such as, skin allergy and infection, and presence of alternatives owing to the lack of awareness are estimated to hamper the market growth.

Which region will provide more business opportunities for growth of the perineural therapy market in future?

The market in the North America region is projected to hold the largest market share by the end of 2031 and provide more business opportunities in the future.