The global pancreatic adenocarcinoma treatment market is estimated to garner a large revenue and grow at a CAGR of ~7% over the forecast period, i.e., 2022 – 2030. The growth of the market can be attributed to the rising geriatric population around the world, increasing consumption of alcohol and smoking, and growing prevalence of obesity. According to the World Health Organization, 8.873 percent of the total population of the world was aged 65 years or above in 2018, which grew up to 9.318 percent in 2020. Along with these, escalating shift in the lifestyle of people and changing dietary preferences are also expected to boost the growth of the market in the forthcoming years. Furthermore, researchers and medical professionals all around the world are extensively being involved in developing innovative and more effective treatments for pancreatic cancer, which is a crucial factor projected to offer abundant growth opportunities to the market in the near future. 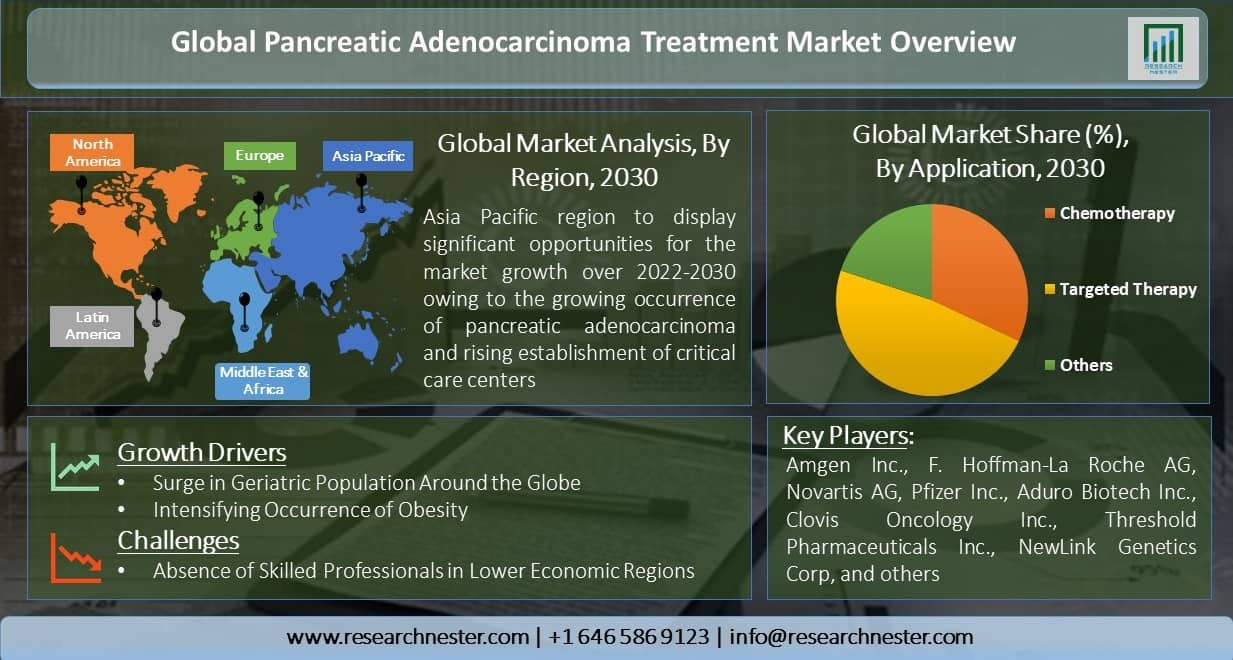 On the basis of geographical analysis, the global pancreatic adenocarcinoma treatment market is segmented into five major regions including North America, Europe, Asia Pacific, Latin America and the Middle East & Africa region. The market in the North America is estimated to gather the largest share over the forecast period on the back of well-established healthcare infrastructure, presence of large population suffering from the disease and increasing acceptance of pancreatic treatment procedure in the region. As per the National Cancer Institute, in 2021, 60,430 people in the United States are evaluated to suffer from pancreatic cancer. The total number of cases are predicted to rise by 3.2 percent since the previous year. In addition, strong presence of major market players is also expected to expand the region’s market in the upcoming years. Moreover, the market in Asia Pacific is projected to witness noteworthy growth during the forecast period, which can be ascribed to the rising occurrence of pancreatic adenocarcinoma and growing establishment of critical care centers in the region.

The global pancreatic adenocarcinoma treatment market is further classified on the basis of region as follows:

What are the major factors driving the growth of the pancreatic adenocarcinoma treatment market?

The major factors driving market growth are increasing geriatric population around the world and rising prevalence of obesity.

What would be the CAGR of pancreatic adenocarcinoma treatment market over the forecast period?

What are the challenges affecting the pancreatic adenocarcinoma treatment market growth?

Lack of skilled medical professionals in lower economic regions is estimated to hamper the market growth.

Which region will provide more business opportunities for growth of pancreatic adenocarcinoma treatment market in future?

Asia Pacific will provide more business opportunities to the market in the future owing to the rising occurrence of pancreatic adenocarcinoma and growing establishment of critical care centers in the region.

Who are the major players dominating the pancreatic adenocarcinoma treatment market?

What are the segments in the pancreatic adenocarcinoma treatment market?

The market is segmented by type, affected area, and by region.

Which segment captures the largest market size in the type segment in the pancreatic adenocarcinoma treatment market?

The exocrine segment is anticipated to hold largest market size and is estimated to grow at a robust CAGR over the forecast period and display significant growth opportunities.