The growth of the global omeprazole market is thriving on the back of the growing number of elderly population around the world, who are also responsible for the increasing prevalence of acid refluxes, respiratory disorders, heart-related issues and others, coupled with the rising number of obese people globally. Obesity results in various types of esophageal disorders, out of which, to cure the GERD type, omeprazole is widely used. Additionally, growing focus on innovation and development for low-cost generics by the pharmaceutical manufacturers and the associated opportunities generated from such advancements are additionally anticipated to contribute towards the growth of the global omeprazole market.

The global omeprazole market is segmented by regions into North America, Latin America, Europe, Asia-Pacific and Middle East and Africa. Among these regions, the market of North America is primarily driven by the U.S. and Canada, where U.S. held the dominant market share of around 59% in the year 2018. Additionally, the market in North America, which held a market share of around 38% in the year 2018, is expected to expand by observing the growth rate of ar0und 1.6x over the forecast period, which in turn is estimated to have a positive effect on the demand for omeprazole in the long run.

Further, Germany, U.K., Russia, France and Italy are some of the prominent countries that are driving the growth of the Europe omeprazole market, where Germany accounted for the largest market share of around 22% in the year 2018. Additionally, the market in Germany is anticipated to cross a value of around USD 220 million by the end of 2027 by growing at a CAGR of around 5.5% over the forecast period. Further, the market in Benelux, in Europe, is anticipated to grow with the highest CAGR of around 7% over the forecast period. CLICK TO DOWNLOAD SAMPLE REPORT 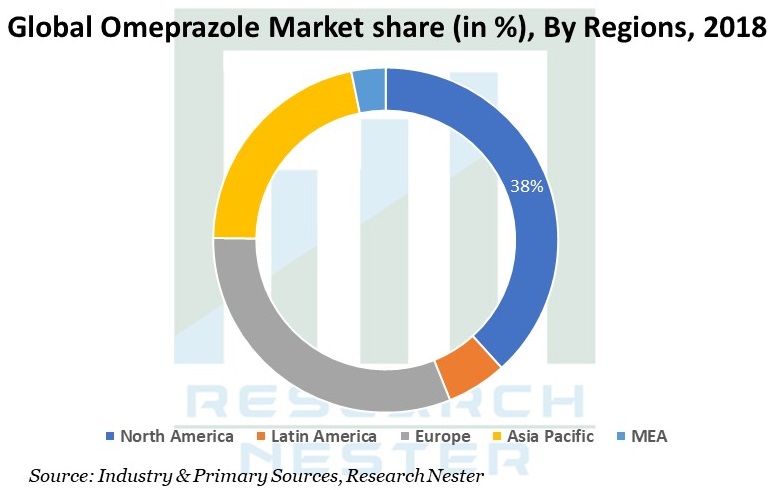 The global omeprazole market has been segmented on the basis of dosage form into capsule, tablet and powder. The capsule segment with around 52% in the year 2018, occupies the largest market of omeprazole across the globe. Additionally, the capsule segment is anticipated to cross a value of around USD 1800 million by the end of 2027 by registering the highest CAGR of around 6.5% over the forecast period. On the other hand, the tablet segment is anticipated to grow with a moderate CAGR of around 6% over the forecast period. 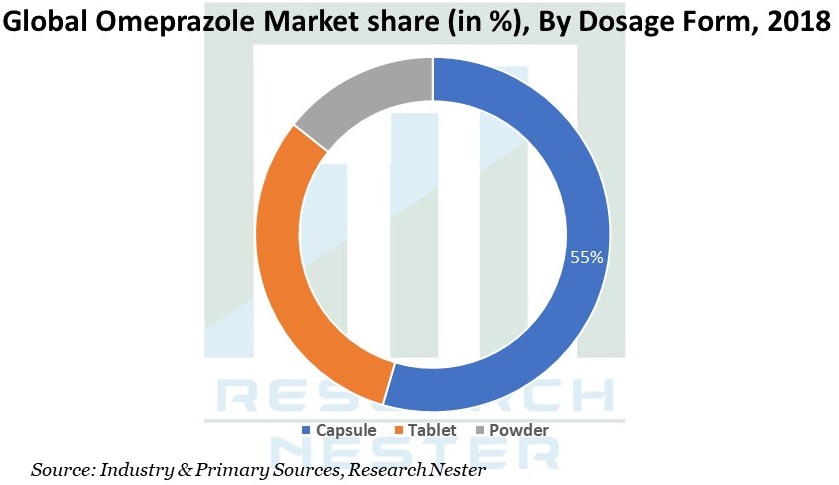 Omeprazole is a prescribed proton pump inhibitor (PPI) that aids in reducing acidity. Moreover, this drug has been approved by the regulatory agencies for curing heartburns as well as for the treatment of diseases linked with the gastro-esophageal reflux disease (GERD). Increasing number of patients who are suffering from peptic ulcers, are in an increase need for the treatment of the disease by the use of omeprazole drug, which is anticipated to drive the growth of the market. Additionally, rising awareness for the treatment of several gastrointestinal disorders, backed by the support of the government of nations for increasingly spending on healthcare infrastructure, are also some of the factors anticipated to drive the growth of the global omeprazole market.

Presence of alternatives, such as antacids, which are also used for the treatment of GERD, as well as to neutralize the acid in the stomach, are some of the factors anticipated to impact negatively towards the growth of the global omeprazole market.

1) What are the major factors driving the growth of the Omeprazole market?

Ans: Increasing number of patients with gastrointestinal disorders amongst individuals is one of the major factors that are driving the growth of the market.

2) What would be the CAGR of Omeprazole market over the forecast period?

4) Which region will provide more business opportunities for growth of Omeprazole market in future?

Ans: the market in Europe is anticipated to provide more business opportunities for growth over the years to come.

5) Who are the major players dominating the Omeprazole market?

7) What are the major segments in the global omeprazole market?

Ans: The market is majorly segmented by dosage form, distribution channel, indication and by region.

8) What can be the significant growth opportunity for the dosage form segment in the global omeprazole market?

Ans: The capsule segment, which is a sub-segment of the dosage form segment, held the largest market share of around 52% in the year 2018 and is anticipated to display significant growth opportunity.

Ans: Growing concerns for the use of alternative drugs, such as antacids is one of the major factors anticipated to act as a barrier towards the growth of the global omeprazole market.