Non-alcoholic steatohepatitis (NASH), also known as non-alcoholic fatty liver disease (NAFLD), is a disease caused by excessive accumulation of fat in the liver. This disease occurs in people who do not consume excessive amounts of alcohol but are obese or diabetic. The fat buildup eventually damages and scars the liver in this condition, which might lead to the formation of cirrhosis in some cases. The symptoms of this disease are often hidden, which makes NASH difficult to diagnose.

The American Liver Foundation reported that non-alcoholic fatty liver disease affects around 30% of the population in the United States. As of 2017, more than 100 million people in the country are predicted to have this disorder.

The non-alcoholic steatohepatitis (NASH) therapeutics & diagnostics market is anticipated to record a significantly high CAGR over the forecast period, i.e., 2019-2027. The market is segmented by therapeutics, by diagnostics and by region, out of which, the therapeutics segment is further segmented into ocaliva, elafibranor, cenicriviroc, selonsertib and others. Based on therapeutics, the segment for elafibranor drugs is anticipated to witness augmented growth in the non-alcoholic steatohepatitis (NASH) therapeutics & diagnostics market on account of high efficacy of the drug in critical cases of NASH. The cenicriviroc and selonsertib segments are predicted to witness a high growth on the back of same reasons. On the basis of diagnostics, the market is segmented into imaging techniques, diagnostic tests and biopsy, out of which, the biopsy segment is estimated to observe lucrative growth during the forecast period. This can be attributed to the high accuracy of liver biopsy as compared to other diagnostic methods for the determination of inflammation in the liver. 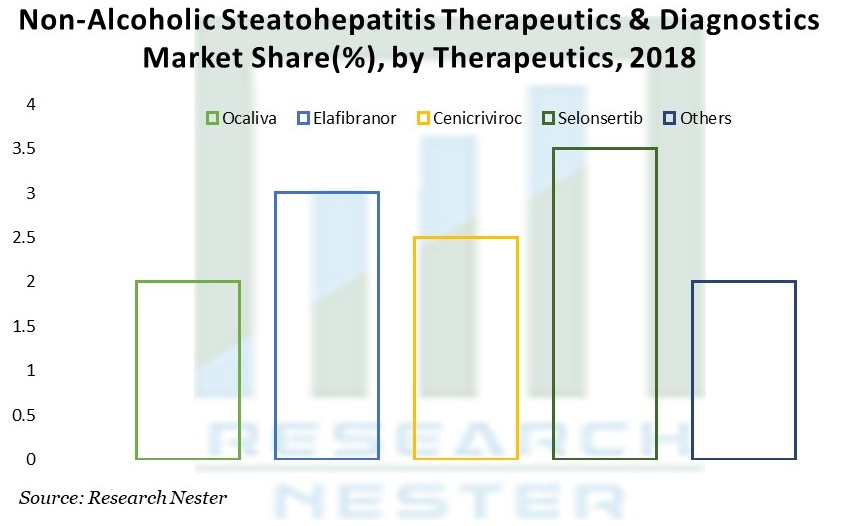 Rising Obesity and Diabetes among People to Drive the Market Growth

According to the World Health Organization, about 1.9 billion adults (above the age of 18) were overweight and out of those, more than 650 million were obese in 2016. The growing cases of obesity among people globally might result in accumulation of fats in the liver, eventually leading to the development of non-alcoholic steatohepatitis (NASH). This is estimated to increase the market growth during the forecast period.

The growing advancements in technology in the healthcare industry is leading to the development of novel methods of diagnosis and improved therapeutics. Research in this field resulting in development of highly effective and safe drugs and diagnostic techniques is growing at both private and government institutions. On the back of these factors, the market for non-alcoholic steatohepatitis (NASH) therapeutics & diagnostics is estimated to grow at a substantial rate in the upcoming years. CLICK TO DOWNLOAD SAMPLE REPORT

The strict government policies and FDA approval for non-alcoholic steatohepatitis drugs is estimated to be a major growth restricting factor for the market. Moreover, the clinical trials for these drugs take several tries before becoming successful, which further hampers the market growth.

On the basis of regional analysis, the non-alcoholic steatohepatitis (NASH) therapeutics & diagnostics market is segmented into five major regions including North America, Europe, Asia Pacific, Latin America and Middle East & Africa region. The market for non-alcoholic steatohepatitis therapeutics & diagnostics in North America is anticipated to hold the leading share in the market as a result of high prevalence of obesity in the region, mainly in the United States and Canada. Moreover, the presence of leading healthcare companies that are actively involved in research and development activities further increases the market growth in this region. The market in Asia Pacific is predicted to grow at the highest rate over the forecast period as a result of growing awareness among people about the long term risks associated with obesity as well as diabetes. The increasing measures taken by people in order to prevent and cure the fatty liver disease along with the rising health consciousness among people are some other factors contributing towards the market growth in this region. 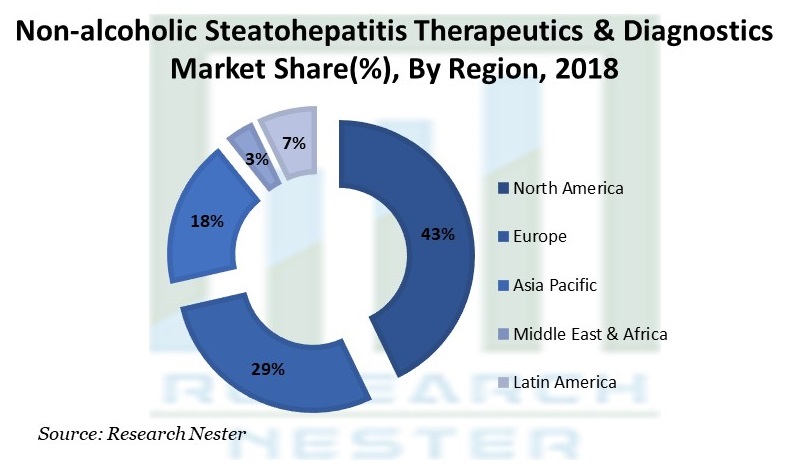 The non-alcoholic steatohepatitis (NASH) therapeutics & diagnostics market is further classified on the basis of region as follows: