Extensive insights into the Growth of No.2 Diesel Fuel Market amidst COVID-19

The global no.2 diesel fuel market is estimated to garner a large amount of revenue and grow at a robust CAGR over the forecast period, i.e., 2022 – 2030. The growth of the market can be attributed to the growing awareness regarding the usage of high-performance fuels, and rising per capita spending across the world. Along with these, increasing population of automobiles on the roads globally, and substantial progress of transportation industry, specifically in developed and developing regions are also expected to boost the market growth in the upcoming years. According to the International Organization of Motor Vehicle Manufacturers, about 91.786 million automobiles were produced in the year 2019, out of which around 67.149 million units were cars and 24.637 million units were commercial vehicles. Furthermore, escalating demand for portable power engines, and surge in utilization of fuel additives for enhancing fuel performance are projected to offer profitable opportunities for market growth in the near future. 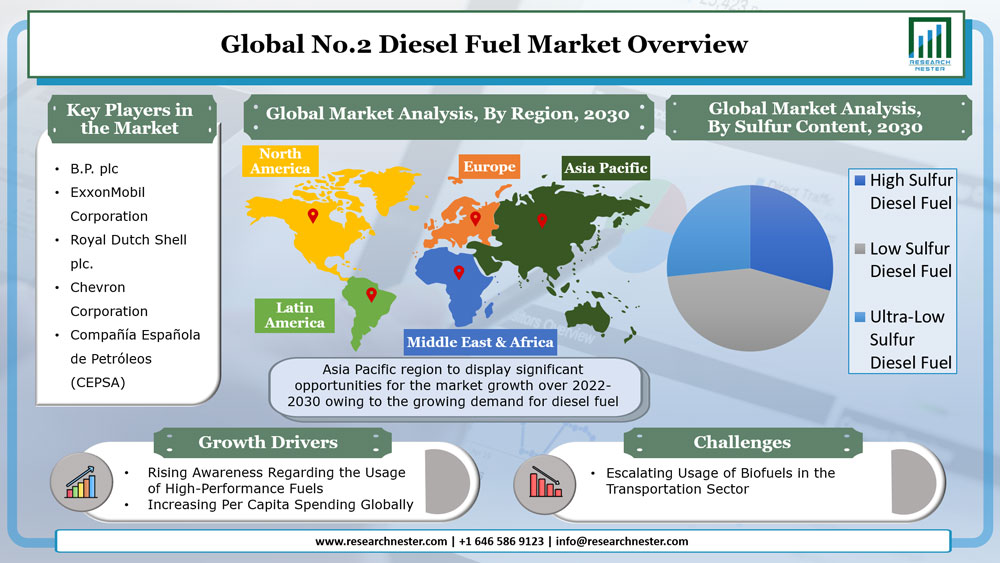 The market is segmented by application into railways, transportation, marine shipping, electric power generation, and others, out of which, the transportation segment is anticipated to hold the largest share in the global no.2 diesel fuel market. This can be accounted to the rapidly increasing urbanization and industrialization, and increase in government investments to improve transportation facilities. Additionally, on the basis of sulfur content, the ultra-low sulfur diesel fuel segment is predicted to witness noteworthy growth during the forecast period, which can be credited to the deployment of stringent government regulations to lower the amount of sulfur in diesel fuel, and growing awareness regarding environmental pollution among consumers across the globe.

On the basis of geographical analysis, the global no.2 diesel fuel market is segmented into five major regions including North America, Europe, Asia Pacific, Latin America and the Middle East & Africa region. The market in the Asia Pacific is estimated to witness noteworthy growth over the forecast period in view of the rising demand for diesel fuel backed by significant growth of the industrial sector in the region. In addition, increasing infrastructural developments, and rapid rate of urbanization are also predicted to propel APAC’s market growth in the coming years. As per the United Nations Economic and Social Commissions for Asia and the Pacific, it is calculated that urbanization rate in the entire region will reach 50 percent by the end of 2026. Moreover, the market in Europe is evaluated to occupy the largest share during the forecast period ascribing to stringent regulatory framework associated with fuel characteristics, and new refining projects in the region. 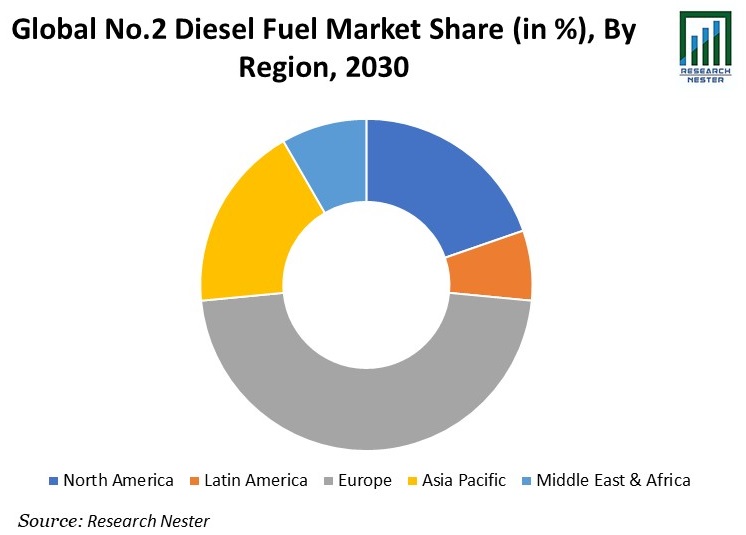 The global no.2 diesel fuel market is further classified on the basis of region as follows:

Our in-depth analysis of the global no.2 diesel fuel market includes the following segments:

What are the major factors driving the growth of the no.2 diesel fuel market?

The major factors driving market growth are growing awareness regarding the usage of high-performance fuels, and rising per capita spending across the world.

What would be the CAGR of no.2 diesel fuel market over the forecast period?

What are the challenges affecting the no.2 diesel fuel market growth?

Utilization of biofuels in the transportation sector is estimated to hamper the market growth.

Which region will provide more business opportunities for growth of no.2 diesel fuel market in future?

Asia Pacific will provide more business opportunities for market growth owing to the rising demand for diesel fuel backed by significant growth of the industrial sector in the region.

Who are the major players dominating the no.2 diesel fuel market?

What are the segments in the no.2 diesel fuel market?

The market is segmented by sulfur content, application, and by region.

Which segment captures the largest market size in the application segment in the no.2 diesel fuel market?

The transportation segment is anticipated to hold largest market size and is estimated to grow at a notable CAGR over the forecast period and display significant growth opportunities.