The global neurostimulator device market is estimated to grow with a moderate CAGR during the forecast period, i.e., 2022-2030. The rise in demand for the neurostimulator devices is anticipated to be driven by the increasing geriatric population in the world and the rise in prevalence of lifestyle diseases such as chronic pain and depression. Along with these, the growing prevalence of neurological disorders, increasing demand for minimally invasive surgeries, and external funding for R&D activities in the pharmaceutical industry are also projected to drive the market growth. Moreover, the adoption of technologically advanced medical products is further expected to bolster the market's growth over the next few years. According to the American Academy of Neurology, in the U.S., strokes are ranked as the third primary cause of deaths, with Alzheimer’s been ranked as the sixth-largest cause for deaths in the country. 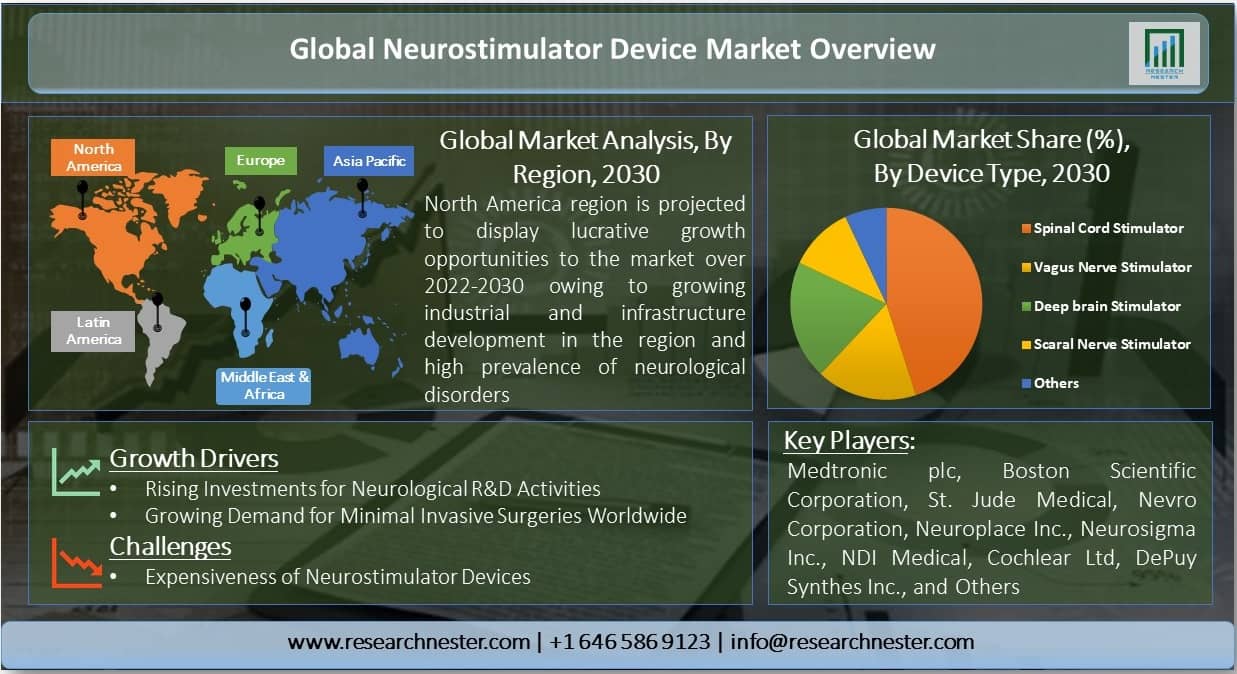 The market is segmented on the basis of application into pain management, hearing loss, urinary incontinence, Parkinson's disease, epilepsy, and others, out of which, the pain management segment is expected to capture a significant market share in the forecast period owing to the growing usage of neurostimulator devices for pain management on account of their high therapeutic value. In addition, high prevalence of chronic pain disorders is also expected to fuel the growth of this market segment. Additionally, based on device type, the spinal cord stimulator segment is anticipated to capture the major market share in the forecast period ascribing to the wide range of applications of spinal cord stimulators and high market dispersion of commercially available products in this market segment. Furthermore, spinal cord stimulators are heavily used in non-malignant chronic neuropathic pain management. CLICK TO DOWNLOAD SAMPLE REPORT

According to the statistics by the World Health Organization, the global per capita healthcare expenditure amounted to USD 1,064.741 in the year 2017. The worldwide healthcare expenditure per person grew from USD 864.313 in 2008 to USD 1,110.841 in 2018, where the U.S. is the top country that amounted to healthcare expenditure of USD 10, 623.85 per capita in 2018. As of 2018, the domestic general government healthcare spending in the U.S. was USD 5355.79, which grew from USD 3515.82in 2008. These are some of the factors responsible for market growth over the past few years. Moreover, as per the projections by the Centers for Medicare & Medicaid Services (CMS), the estimated average annual percent change related to National Health Expenditures (NHE)in the U.S. was 5.2% in 2020 as compared to 2019 (4.5%). Furthermore, the National Health Expenditures are projected to reach USD 6,192.5 Billion in 2028, where the per capita expenditure is estimated to touch USD 17,611 in the same year. These are notable indicators that are anticipated to create lucrative business opportunities in upcoming years.

Geographically, the market is segmented into North America, Latin America, Europe, Asia Pacific, and the Middle East & Africa region. Europe is estimated to occupy a significant market share over the forecast period, which can be credited to the rapid economic expansion in Eastern European countries. Moreover, Asia Pacific is expected to witness significant market growth in the forecast period as companies are shifting their manufacturing base in the region owing to the existence of untapped growth opportunities and unmet medical needs. Furthermore, economic development in emerging countries such as China and India, is also evaluated to boost market growth in the region. Furthermore, rising prevalence of neurological disorders, favorable reimbursement rates, increased geriatric population, and innovative technology is anticipated to drive the market growth in North America region. Apart from this, research and development activities to develop new technologies to manage neurological disorders including, Parkinson’s disease, dystonia, and epilepsy is also predicted to lead to the growth of the market in the region. According to the Parkinson’s Foundation, about 60,000 Americans are diagnosed with Parkinson’s disease (PD) every year. Approximately 4% of people are diagnosed with PD before the age of 50 years in the country. 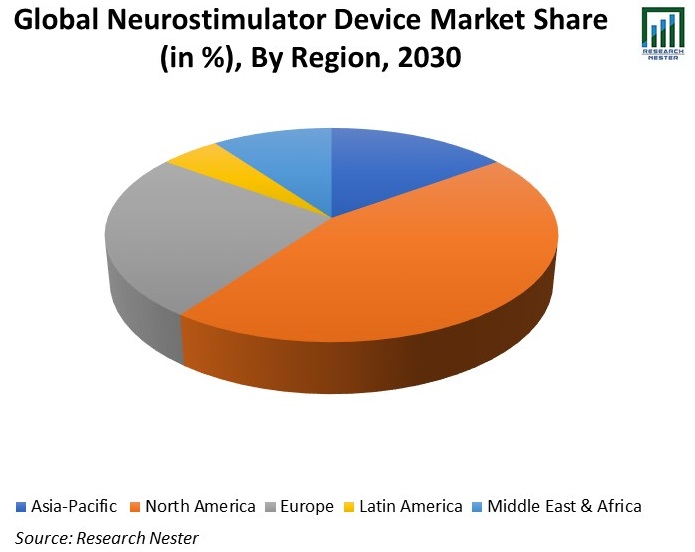 The global neurostimulator device market is further classified on the basis of region as follows:

Our in-depth analysis of the global neurostimulator device market includes the following segments:

What are the major factors driving the growth of the neurostimulator device market?

Increasing geriatric population in the world and rising prevalence of lifestyle diseases such as chronic pain and depression are some factors driving the market growth.

What would be the CAGR of neurostimulator device market over the forecast period?

What are the challenges affecting the neurostimulator device market growth?

Which region will provide more business opportunities for growth of neurostimulator device market in future?

The market in North America region will provide ample growth opportunities owing to the growing industrial development and infrastructure development and rise in prevalence of neurological disorders.

Who are the major players dominating the neurostimulator device market?

What are the segments in the neurostimulator device market?

The market is segmented by device type, application, and by region.

Which segment under the application segment captures the largest market size in the neurostimulator device market?

With respect to application, the pain management segment is anticipated to hold the largest market share owing to the growing usage of neurostimulator devices for pain management.