Nebulizer is a drug delivery device which is used to administer medication or to give high doses of medicine to patients. These are basically breathing machines which are used to treat various lung conditions such as asthma and other respiratory illnesses.

Apart from North America, Europe nebulizer market is envisioned to witness robust growth during the forecast period. According to British Lung Foundation, someone dies from lung disease in the UK every 5 minutes. High prevalence of lung diseases in Europe region is projected to drive the growth of nebulizer market in this region over the forecast period.CLICK TO DOWNLOAD FREE SAMPLE

Our in-depth analysis has segmented global nebulizer market into the following segments:

Global nebulizer market is further classified on the basis of region as follows: 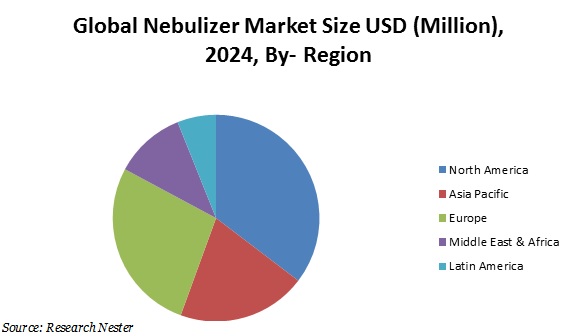 Growing incidences of lung related disease such as asthma, lung cancer, influenza and others along with rising old age population across the globe is anticipated to flourish the growth of nebulizer market. Further, growing awareness regarding respiratory diseases is also projected to bolster the market of nebulizer in upcoming years. Apart from this, high penetration of lung diseases in geriatric population is a major reason which is augmenting the demand for nebulizers.

However, high reliability on electric source and chances of infection due to long term use of nebulizers are projected to limit the growth of global nebulizer market in near future.