Nebulizer is a device used to administer medication or for drug delivery in the form of mist for treatment of respiratory diseases such as asthma, cystic fibrosis, COPD and other respiratory diseases by inhalation into the lungs. Oxygen, compressed air or ultrasonic power is applied in order to break up suspensions and solutions into directly inhalable small aerosol droplets. The aerosol is gas and solid or solid and liquid particles mixture that can be directly inhaled from the mouthpiece of the nebulizer. Nebulizers are specifically used for numerous types of medications to directly target their effect to the respiratory tract in order to speed up the onset action of the medicine with reduced side effects.

Nebulizer market is anticipated to record a CAGR of 6.8% over the forecast period i.e. 2019-2027. The market is estimated to stimulate a significant growth on the back of increasing technological advancements along with rising healthcare expenditure and growing patient awareness across the developing economies regarding advanced healthcare equipment during the forecast period.  Many multi-national companies are concentrating towards new product advances in nebulizer market. Besides, the growth of the market will be augmented at a steady rate on the back of shifting trend from hospital care to home care-based treatment along with product’s feasibility in home care settings around the globe. Further, the demand for portable home care set up nebulizers is projected to accelerate on the back of increasing geriatric population across the globe.On the basis of regional platform, the global nebulizer market is segmented into five major regions including North America, Europe, Asia Pacific, Latin America and Middle East & Africa region.

North America is expected to display a strong growth on the back of increasing trend of homecare services combined with favorable healthcare reimbursement policies across the region. Further, the Europe market for nebulizers is anticipated to induce a budding growth on the back of growing number of smokers and rising geriatric population across the region.

Asia Pacific is attributed to boost the nebulizers market during the forecast period on account of rising level of environmental pollution around the countries such as India, China and others accompanied with increased COPD incidences and significant rise in the percentage of population suffering from pulmonary diseases across the region.

High prevalence of pneumonia in children under the age of 5 due to viruses, bacteria or fungi is the major factor that is driving the demand for nebulizers in pediatric group. Pneumonia is a type of respiratory infection that had caused 920,136 children deaths in 2015 according to the reports by WHO.

Further, the growing rate of respiratory tract infection owing to increasing pollution levels around the globe is expected to serve as a leading factor in the growth of the nebulizers market. Additionally, rising number of respiratory disorders due to diseases such as asthma, bronchitis, lung cancer, pulmonary edema, pneumothorax, sarcoidosis and others are expected to boost the demand for nebulizers over the forecast period.

The World Health Organization in its recent reports stated that the lung cancer was ranked as first major cause of the cancer incidences and mortality burden around the globe in 2018. The recent statistics released by the WHO also stated that lung cancer was responsible for around 1.8 million deaths in the year 2018, contributing towards the highest number of deaths among all the cancers during the year. Moreover, an estimated 251 million people worldwide as per the reports of the Global Burden of Disease Study were suffering from chronic obstructive pulmonary disease (COPD) in the year 2016. These factors together are anticipated to drive the nebulizers market significantly during the forecast period.

Rising Geriatric Population and Other Factors

The worldwide growth of the geriatric population (8.696% in the year 2017) along with the increasing rate of suffering from various respiratory disorders due to aging which further results in the weakening of immune system, making an individual susceptible to diseases is expected to propel the growth of the global nebulizer market during the forecast period. Furthermore, growing need to curb healthcare expenditure, higher feasibility of device in home care with the ease of usability and availability is attributed to noticeably drive the growth of market during the forecast period.

Presence of Other Alternatives

However, due to the nozzles of nebulizer not being airtight, the loss of drugs through these systems or devices during administration in pediatric population is high which can be overcome by the use of metered dose inhalers. This factor is estimated to serve as a key restraint in the growth of the nebulizer market across the globe.

Global nebulizer market is further classified on the basis of region as follows: 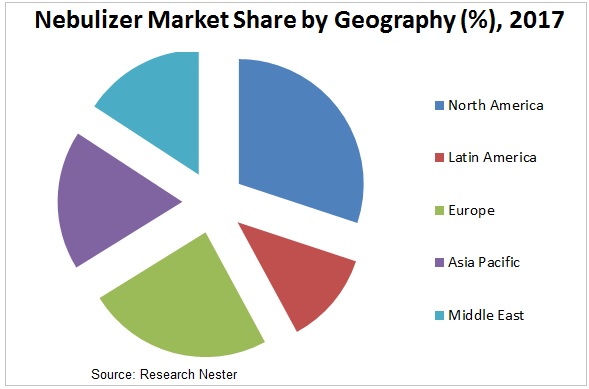