Extensive insights into the Growth of Nafion Market amidst COVID-19

The global nafion market is estimated to garner a sizeable revenue and grow at a CAGR of ~6% over the forecast period, i.e., 2022 – 2030. The growth of the market can be attributed to the growing demand for ion exchange membranes in fuel cell applications, increasing use of clean energy sources for power generation, and rising emphasis of governmental and non-governmental organizations to reduce emissions. According to the International Energy Agency, in 2018, the total energy generated by wind and solar sources was 286,377 ktoe, and from biofuels and waste was 1,324,214 ktoe. In addition to these, nafion has exceptionally high efficacy as a cost-effective alternative to maximize production efficiency in the chlor-alkali industry. This is projected to be a crucial factor driving market growth in the upcoming years. Furthermore, inline initiatives by fuel cell manufacturers and governments are expected to provide ample opportunities for market growth in the near future. 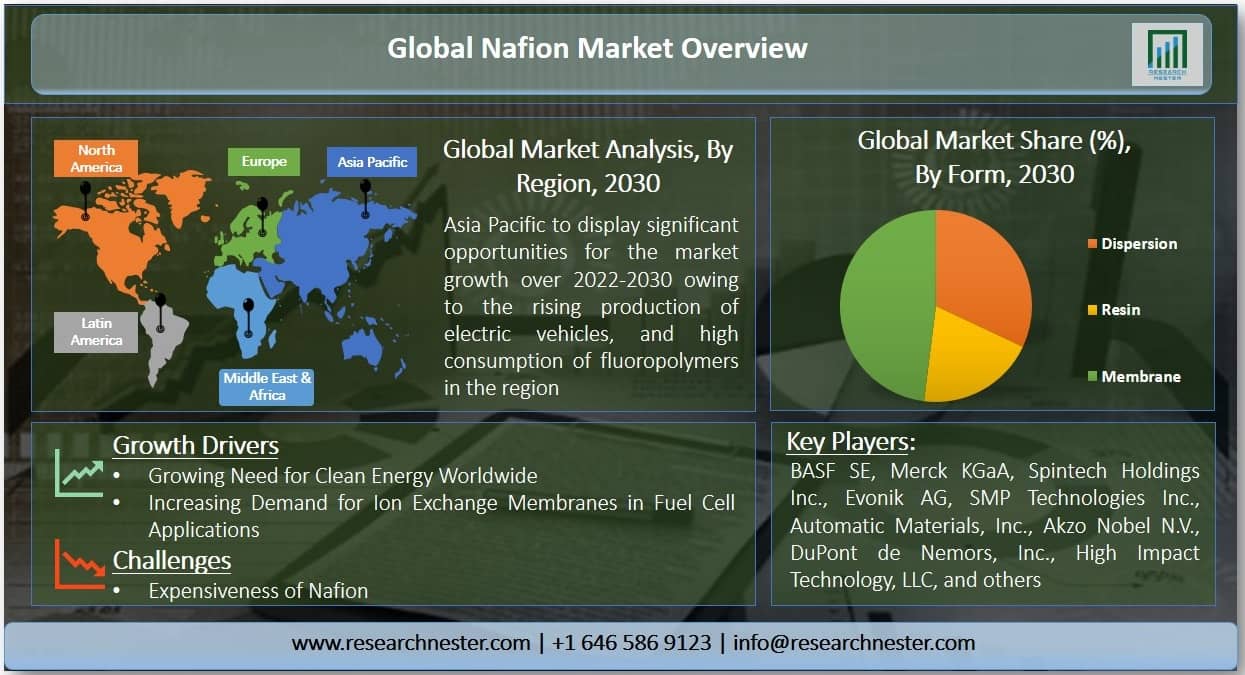 The market is segmented by application into energy, chemical processing, semiconductors, waste recovery, drying & humidification, tubing systems, and others, out of which, the energy segment is anticipated to hold the largest share in the global nafion market over the forecast period on account of the rising demand for clean energy production, and increasing investments on studying proton exchange membrane (PEM) fuel cells. Along with these, growing production of zero or no emission vehicles is also predicted to drive growth to the market segment in the future. Additionally, on the basis of form, the membrane segment is assessed to grab the largest share during the forecast period owing to the high proton conductivity, distinguished mechanical properties and good chemical stability of these membranes. CLICK TO DOWNLOAD SAMPLE REPORT

On the basis of geographical analysis, the global nafion market is segmented into five major regions including North America, Europe, Asia Pacific, Latin America and the Middle East & Africa region. The market in the Asia Pacific is estimated to acquire the largest share and witness highest growth over the forecast period on the back of the largescale production of electrical vehicles in Asia, and growing number of ongoing government initiatives to boost the energy sector in the region. For instance, in China more than 1.2 million electric vehicles were sold in 2020, which depicted about 41 percent of total electric vehicles sold around the world. Apart from this, high consumption of fluoropolymers in the region is also anticipated to drive market growth to the APAC in the coming years. Moreover, the market in North America is also expected to gather a notable share by the end of 2030, which can be ascribed to the presence of major market players and rise in geographical expansion by chemical companies in the region.

The global nafion market is further classified on the basis of region as follows:

Our in-depth analysis of the global nafion market includes the following segments:

What are the major factors driving the growth of the nafion market?

What would be the CAGR of nafion market over the forecast period?

What are the challenges affecting the nafion market growth?

High cost of nafion is estimated to hamper the market growth

Which region will provide more business opportunities for growth of nafion market in future?

Who are the major players dominating the nafion market?

The major players in the market are BASF SE, Merck KGaA, Spintech Holdings Inc., Evonik AG, and others.

What are the segments in the nafion market?

The market is segmented by form, application, and by region.

Which segment captures the largest market size in the form segment in the nafion market?

The membrane segment is anticipated to hold largest market size in value and is estimated to grow at a noteworthy CAGR over the forecast period and display significant growth opportunities.