Multiple sclerosis is a chronic disorder affecting the central nervous system (CNS) of a person, including the brain and spine. It is an autoimmune disease in which the body’s immune system starts attacking the protective myelin sheath covering the nervous tissue. If preventive measures are not taken on a timely basis, this eventually damages the nerves permanently, resulting in disruption of the communication between the brain and other body parts, for instance, the optic nerves in eyes. Multiple sclerosis has a higher chance of occurring among women as compared to men. The main symptoms caused by this disorder include: weakening of muscles, fatigue, defective vision, poor bladder control and difficulty in walking. The causes of multiple sclerosis include environmental factors. Some possible risk factors for this disorder include smoking, obesity and vitamin D deficiency. For instance, studies report that people with vitamin D deficiency, especially among those residing away from the equator, might have increased chances of this disease, although the exact cause is still unknown.

According to a journal published by the Lancet Neurology, there were 2,221,188 cases of multiple sclerosis prevalent around the world in 2016. The age-standardized prevalence of this disorder was higher than 120 cases per 100,000 people in North America. On the other hand, it was moderate in some European countries with 60 to 120 cases per 100,000 population and lowest in North Africa, Middle East and Latin America with less than 60 cases per 100,000 people in every region. The multiple sclerosis drugs and treatment market is anticipated to record a CAGR of around 6% over the forecast period, i.e., 2019-2027. The market is segmented by drug, by route of administration, by distribution channel and by region. Based on route of administration, the market is bifurcated into oral and injection routes, out of which, the injection segment is anticipated to hold the largest share in the multiple sclerosis drugs and treatment market on account of higher efficacy of drugs administered through the intravenous route along with a better drug delivery. On the other hand, the market is segmented by drug into interferons, immunomodulators and immunosuppressants, out of which, the immunomodulators segment is estimated to hold a significantly large share in the market as a result of new treatment methods available involving immunomodulatory drugs and a higher demand for these drugs. 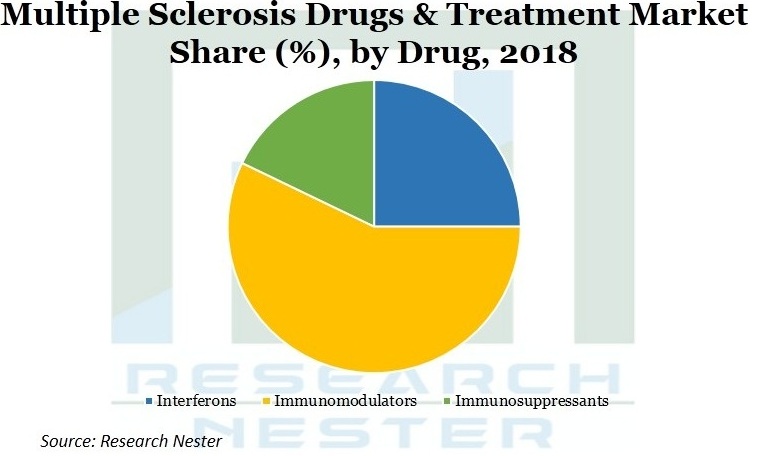 Development of New Therapeutic Drugs to Drive the Growth of Market

Increasing expenditure in the healthcare industry has increased the number of research and development activities that are being conducted across the world for the treatment of multiple sclerosis. The rising awareness for multiple sclerosis is anticipated to increase the demand for improvements in the therapeutic drugs and treatment methods available for the disorder. This is one of the major factors estimated to drive the market growth during the forecast period. Additionally, clinical studies on multiple sclerosis and availability of new drugs in the market are anticipated to further support the market growth.

Stringent approval of multiple sclerosis drugs by the FDA is a factor estimated to contribute towards the decline of the market growth. Moreover, the high cost of conducting repeated trials for various therapeutic drugs along with the greater amount of time taken for approval of these drugs is anticipated to restrict the growth of this market.

Our in-depth analysis of the multiple sclerosis drugs and treatment market includes the following segments:

The market in North America is anticipated to hold the largest share in the market on the back of high prevalence of multiple sclerosis in the region. The growing innovations in medical technology as a result of increased research and development activities in the region can be further attributed to the market growth. Moreover, the growth of this market is influenced by increasing number of research institutions and presence of highly advanced healthcare facilities in hospitals. In Europe, the market is estimated to maintain the second highest share in the global market during the forecast period. The growing demand for effective treatment methods for multiple sclerosis along with rising incidences of kidney disorders in the region account for this growth. The highest growth rate is anticipated to be observed in the market in Asia Pacific on account of emerging healthcare infrastructure and increasing cases of multiple sclerosis among people in the region, especially in countries such as China and India.

The multiple sclerosis drugs and treatment market is further classified on the basis of region as follows: