Motorcycle hub motor can be arranged or fit in two possible ways; direct connection and wheel hub with an additional gearbox facility. Through direct connection, vehicle can attain low speed with high torque, whereas, through wheel hub with an additional gearbox facility, vehicle can attain speed and torque according to the requirement. Motorcycle hub motor is generally used in e-bikes, e-scooters, e-bicycles and industries where driving wheel is a part of assembly lines.

The electric two-wheeler market is growing significantly on the back of growing awareness regarding global warming as people are moving from vehicles using conventional resources to vehicles that use renewable resources. Further, stringent rules and regulations by government and improved vehicle performance efficiency, increased power, better vehicle handling and high torque related to hub motors are some of the factors that are expected to drive the growth of the market in upcoming years.

The motorcycle hub motor market is anticipated to record a CAGR of around 5.3% over the forecast period i.e. 2019-2027. The market is segmented by vehicle type into e-bikes, e-scooters and e-bicycles, out of which e-bikes segment is anticipated to have largest market share on the back of high torque, better vehicle handling and increased power in both existing and new vehicles. Further, the market is segmented by installation type into front hub motor and rear hub motor, out of which, the rear hub motor segment is expected to dominate the market on the back of its powerful acceleration, high power handling, better traction and high flexibility. 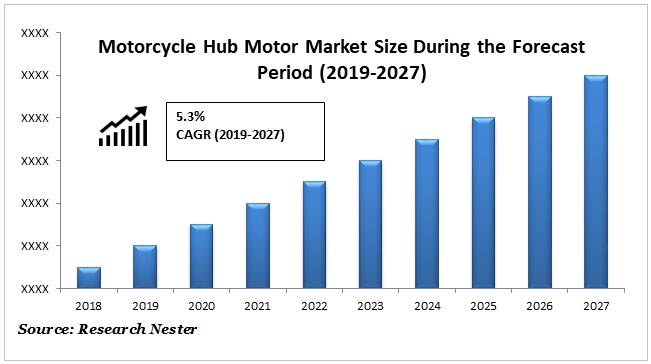 Rise in Demand for Electric Two-Wheelers

Growing ecological concerns are driving the demand for electric two-wheelers. Further, stringent government rules promoting the use of vehicles that do not emit CO2 and use renewable power resources rather than using conventional resources of energy are some of the significant growth indicators that are estimated to boost the growth of the market.

On the back of advancement in hub motors, the majority of the customers are purchasing them directly from the original equipment manufacturers. Further, the growing rate of manufacturing and exporting electric vehicles are directly boosting the market shares in OEM segment, which is further anticipated to support the growth of the market significantly over the forecast period.

Hub motors usually cost high owing to their attributes such as their ability to handle high power, better traction control and high flexibility. The presence of alternatives at lower rates and lack of awareness regarding motorcycle hub motors among people is expected to hamper the growth of the market during the forecast period.

Asia-Pacific is expected to dominate the market on account of rising ecological concerns among people and increasing production and sales of electrical two-wheelers in the region. Further, stringent government rules and regulations to produce electric vehicles for conserving fuels is a notable factor that is anticipated to support the growth of the market in Asia-Pacific region.

The global motorcycle hub motor market is further classified on the basis of region as follows: