The global molecular robots market is estimated to garner a substantial CAGR over the forecast period, i.e., 2021–2030. The growth of the market can be attributed to the technical advancements in robotics and automation development, along with the increasing investment for the R&D in this direction. Development of new technologies, including artificial intelligence, has widened the scope for innovation in the field of technology, which has raised the government funding and investment in technology. This is also expected to boost the market growth. Moreover, the application of molecular robots in studying controlled chemical reactions, discovering drugs and treatment methods for rare diseases, and genetic research, is estimated to boost the growth of the market in the upcoming years. 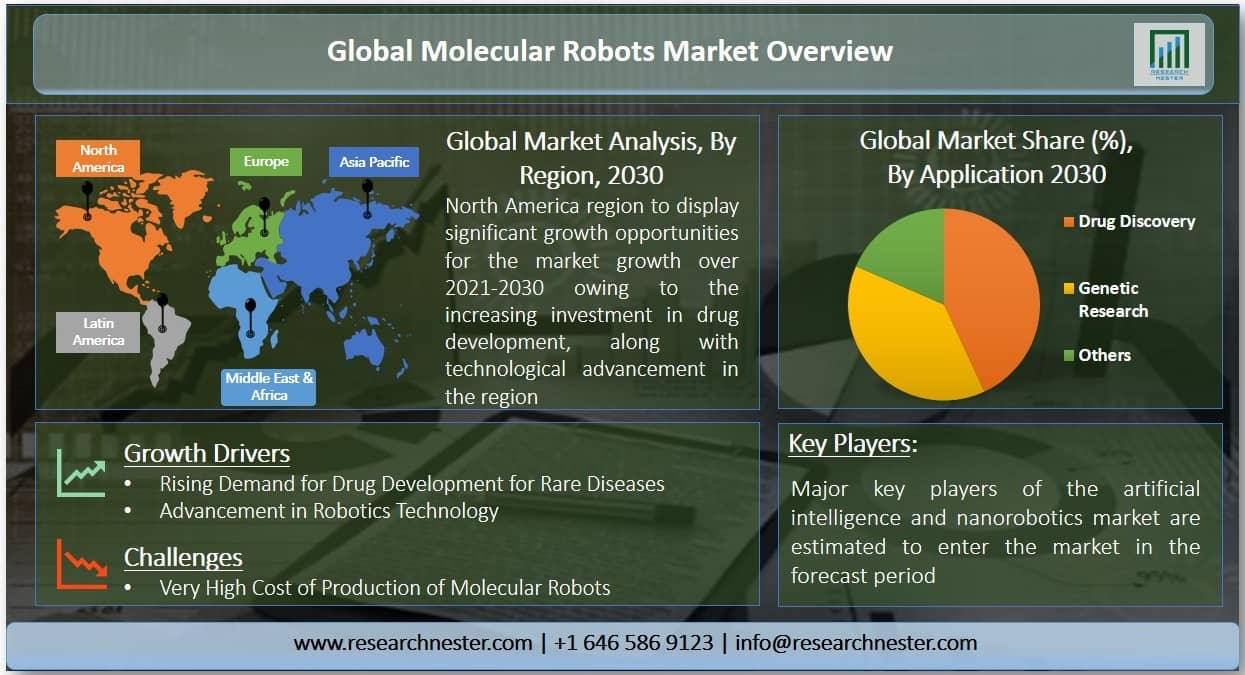 The global molecular robots market is segmented by application into drug discovery, genetic research, and others, out of which, the drug discovery segment is anticipated to hold the major share in the market during the forecast period on account of escalating prevalence of rare diseases and increasing demand for novel treatment methods. Moreover, increasing investment in research by pharmaceutical companies, is estimated to boost the growth of the segment. On the basis of end-user industry, the market is segmented into chemical, pharmaceutical, and others, out of which the pharmaceutical segment is projected to garner significant revenue, owing to the growing R&D activities, funded by major pharmaceutical companies, for the development of better drugs. For instance, in the U.S., the investment in drug development for diseases, such as, Alzheimer’s disease, cancer, and heart stroke, amounted to over USD 180 billion, in 2018. CLICK TO DOWNLOAD SAMPLE REPORT

Regionally, the global molecular robots market is segmented into five major regions including North America, Europe, Asia Pacific, Latin America and Middle East & Africa region. The market in the North America region is estimated to garner largest share over the forecast period on the back of advanced technology present in the region, along with constant development in technology. Moreover, the presence of major pharmaceutical companies, high healthcare expenditure and increasing investment in R&D activities, is expected to drive the regional market growth According to the data by the World Health Organization (WHO), as of 2018, 16.416 % of the GDP was spent on the healthcare sector in North America. The market in the Asia Pacific region is estimated to witness notable CAGR over the forecast period owing to the emerging scope for technological research and development in countries, such as, Japan, and China. 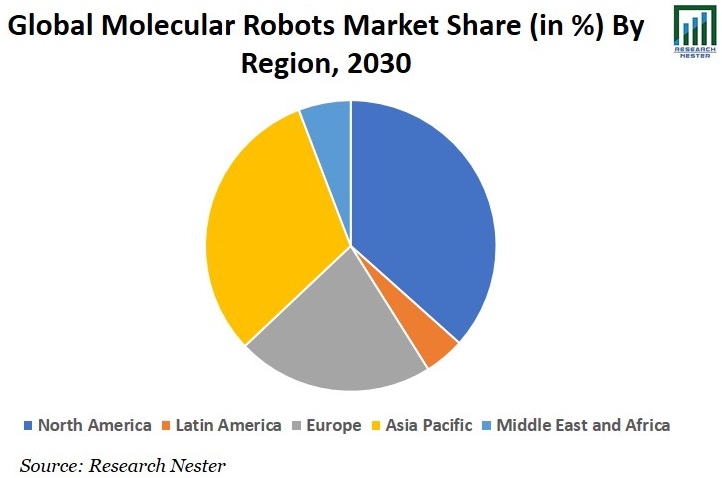 The global molecular robots market is further classified on the basis of region as follows:

Our in-depth analysis of the global molecular robots market includes the following segments:

The molecular robots are being developed by various research teams, including Harvard University. This has not attained the commercial level of production. However, various market players of nanorobotics, such as Nanorobotics Ltd., Molecular Robotics, and others, along with players working with artificial intelligence technologies are foreseen to step into the molecular robotics market in the near future.

What are the major factors driving the growth of the molecular robots market?

Growing demand for drug discovery for rare diseases and advancement in technology are the major factors driving the market growth.

What would be the CAGR of molecular robots market over the forecast period?

The market is anticipated to attain a substantial CAGR over the forecast period, i.e., 2021-2030.

What are the challenges affecting the molecular robots market growth?

Very high costs of molecular robots is a major factor estimated to hamper the market growth.

Which region will provide more business opportunities for growth of molecular robots market in future?

The market in the North America will provide the highest growth opportunities for the market during the forecast period on the back of increasing R&D activities, backed by high investment.

What are the segments in the global molecular robots market?

The market is segmented by technology, application, end-user, and by region.

Which segment captures the largest market size in the application segment in the molecular robots market?

The drug discovery segment is anticipated to hold the largest market size, during the forecast period on the back of increasing need for novel drugs for rare genetic diseases.